Hi there cats and kittens, this week’s episode of The High Five podcast gets hep with a quintet of musicals from the 1980s that have roots going back to the 1950s! We have Happy Days and Grease to thank for these, plus the eventual power that kids who grew up in that older decade had in the latter one! This one was a real wild trip, but I had a gas putting it together!

Oh and if you want to list to the Spotify playlist I put together based on some of these films’ soundtracks, check it out!

Here’s a few cool pieces of Little Shop Of Horrors art too!

I actually watched Rosemary’s Baby a little while back, but haven’t written about it yet, because the missus and I were waiting to go live with the news that she’s pregnant. We’ve known for a while, but wanted to wait to let the whole world know until after we heard the baby’s heartbeat for the first time and hit the 12 week mark. Well, here we are and I can tell you that watching Rosemary’s Baby was much weirder to watch knowing my wife was pregnant. See, the idea with this Roman Polanski movie–which I had never seen before–is that Rosemary and her husband move into a nice building in Manhattan where they make friends with an old couple next door by the name of Castevets. Soon Rosemary gets pregnant and finds herself at the mercy of doctors and other folks she doesn’t know, but also doesn’t know much better. Let’s call this SPOILER territory for a 42 year old movie. Rosemary’s baby’s conception happens during a very creepy fever dream she has. Her husband says he just went to town on her though she rightly questions why he couldn’t have waited til the next morning. From there, Rosemary has various suspicions about her husband, her doctor and especially the Castevets who she later becomes convinced have ties to the devil, or something.

The fear of the movie is supposed to come from whether Rosemary’s really being troubled by devil worshipers or if she’s just going crazy. She is a very helpless character as she’s so insulated. Surrounded by the Castevets and people they set her up with, Rosemary becomes more and more helpless the more and more pregnant she gets. I’ve become aware recently that pregnant women are incredibly vulnerable which explains why she didn’t just bail earlier. Plus, she’s questioning her sanity.

SPOILER again. I was worried that the flick would end on an ambiguous note, with you not knowing if the neighbors were really bad guys or not, but we have a straight-up reveal that not only are they devil worshipers (who hilariously holler “Hail Satan” at the end of the movie), but also that the baby is, in fact, part devil.

Even though this is considered a classic, I didn’t really dig it that much, though I do appreciate the indictment of city life and the medical system that has developed around that new lifestyle. In the old days, when we lived in villages, women gave birth with their mothers, grandmothers, aunts, sisters and friends instead of doctors. All those women knew what they were doing and just let nature take its course. But in a city, you’re taken away from your family (assuming you’re a newcomer, of course) and have to rely on strangers and other non family members who might not have your best interest in mind. All that’s very interesting, but I didn’t really find the movie scary. Sure, the dream sequences are creepy and stories about people who think they might be going crazy always make me hope that that never happens to me, but the movie rests on Mia Farrow as Rosemary and I just don’t like her and not just because she was messing with Frank Sinatra’s head at the time (he served her divorce papers while she filmed this flick which took longer to complete than expected). I just don’t like her. She looks to spacey, like nothing’s really there, which doesn’t make me care about her that much. Sure all the things that happen to her suck, but I’m not emotionally invested past my pre-existing fears and situations, she does nothing to draw me in. It’s not a bad movie by any means, just not one I need to revisit for a long while. 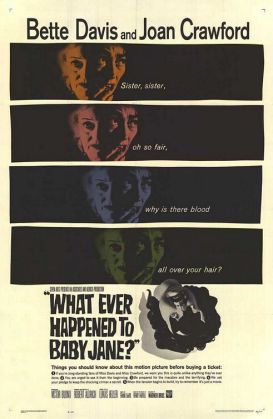 Whatever Happened To Baby Jane? also didn’t really do it for me, but I think it might be because this movie wasn’t edited very well. The flick is about a pair of sisters named Jane (Bette Davis) and Blanche (Joan Crawford) who were both actresses. Back when they were kids, Jane was a child star, but later on in life, Blanche was thought to be a legitimate star and Jane was just brought along for the ride with her sister. That ride ended when someone seemingly hit Blanche with a car leaving her paralyzed. Many years later, which is when our story is mainly set, Jane is taking care of Blanche, who is stuck in a wheel chair on the second floor of their big house. Blanche doesn’t like how Jane is helping her, especially when Jane starts manipulating her and making her even more of a prisoner in her house thanks to messing with the phones and her mail. In this case, the fear is supposed to come by relating to the trapped Blanche and waiting for the trouble Jane to finally flip her lid and kill someone. But there’s a lot else going on here including a housekeeper suspicious of Jane and Jane’s attempt to get her stage career back off the ground. All of this adds various plot points and depth to the story, but it also adds padding to the point that you forget how bad things are for Blanche. At over 2 hours the movie CRAWLS along to it’s finale that left me scratching my head (how do those cops have such trouble finding a decrepit old broad on a beach with only like 20 people on it?). Some script tightening and tighter editing would have made this a true thriller instead of a plodding drama.

Otherwise, though, there’s some interesting things happening in this movie. Apparently Davis and Crawford hated each other. There’s a scene where Jane attacks Blanche, but when Davis went to kick Crawford in the head (a pretty intense scene), she actually did. To get her back, Crawford added weights to her pockets so Davis would hurt her back while dragging Davis across the floor. I also read that they almost filmed this movie in color, which would have been a huge mistake because the make-up caked on Davis and Crawford would probably not have held up well, but looks ultra creepy even today. Plus, there’s a cool twist at the end I wasn’t expecting, but after a nearly grueling two hours, I was exhausted and just wanted the thing to end. I kind of want to get a copy of this movie and edit the hell out of it to make it more of a thriller, but that seems like a helluva lot of work.