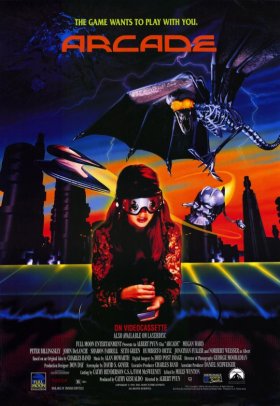 After watching Cyborg again fairly recently, I fell down the rabbit hole that is director Albert Pyun’s filmography. While poking around, I spied a film called Arcade that sounded like something I wanted to check out. I actually had this disc from Netflix on hand when I watched Evolver last week, but the disc was cracked and I couldn’t watch it until they sent me a new one.

Before getting into the plot of this movie, I’ve got to talk about it’s pedigree a bit. Not only is Arcade directed by 90s straight-to-video maestro Pyun who did a lot with not much all the time back then, but also features a script penned by David S. Goyer and Charles Band who also acted as producer. You’ll recognize Goyer’s name from little films like Batman Begins and Man Of Steel. And then you’ve got the cast which includes Megan Ward (Dark Skies, Encino Man), Seth Green (Buffy, Dads), Peter Billingsley (Christmas Story) and even Don Stark (That 70s Show). Needless to say, I got more and more excited as the credits rolled on this film I knew almost nothing about.

Plotwise, this film follows Alex (Ward) and Nick (Billingsley) as they try to figure out what’s going on as the terribly named new virtual reality arcade game Arcade and it’s console cousin seem to be absorbing or destroying their friends. Much like Evolver, the kids wind up heading to the game company — good thing they live in California, I guess — and then using that knowledge to confront the game and save their friends and family.

It would be pretty easy to write this movie off as another Charles Band cash grab, but I’ve got to say, I found it pretty absorbing. I liked how the main kids all seemed like they could be in high school and were outsiders, but not complete degenerates. Even though you don’t see them together a ton, you get the feeling that there’s a lot of history in their crew. I also thought the plot itself was solid and included some pretty heavy elements. The movie opens with Alex remembering when she found her mom post-suicide and we eventually learn that the video game company used the brain cells of a murdered boy to help create the game’s villain. Plus, how great is it to see one of these kids-against-something-crazy movies with a female lead?

As it turns out, Band and Pyun weren’t happy with the first batch of CGI special effects and had everything redone. Those results can be seen in the trailer posted above while the original graphics can be seen below.

All in all, even though the CGI is pretty distracting for the modern audience, I had a really good time with this imaginative, sometimes scary adventure story revolving around the rad world of video games. I’ve also got to admit that I was relieved by the plot of this film because I’ve been kicking around an arcade-based story idea that is not similar to this at all. It’s always relieving to find out your not accidentally treading old ground.

After seeing that awesome Nerf gun a few days back I’ve had Nerf on the brain which got me thinking about classic Nerf commercials. And what’s the first one that comes up? Seth Green’s radical one hawking the Nerf Slingshot in a strange accent. I actually heard him talk about this on Opie and Anthony back when they were still on in New York and he said the commercial director told him to put on that accent for some reason. Anyway, I remember the Slingshot, it was a lot of fun, though doesn’t have the firepower of the pull-back guns. I also remember hair like Seth sports in this commercial and it fills my head with nightmares. Does any age group ever look back on what they wore in high school and think they looked awesome?

Few movies exemplify everything I wanted to be when I was 10 years old more than Airborne. Not only was the main character Mitchell, played by now-real estate agent Shane McDermott, living in a cold town in Ohio (Cincinnati about four or so hours from Toledo), but he was also really good at surfing and rollerblading. I was always really, really into watching rollerblading, skateboarding and BMX competitions on ESPN2 back then (this was around the time the XGames started I guess), but was always too much of a wuss to try anything more than going kinda fast (plus I could never get myself going on a skateboard).

So, right off the bat, I gotta say that Airborne gets Best Of The Best status for purely nostalgic reasons. It’s not a great film, but it’s great to me. In addition to all the rollerblading stuff (the race in the end is EPIC), you’ve got all the usual teenage, non-sexual mellowdrama you’d expect from a PG movie from 1993. It also features early roles by Seth Green and Jack Black. I’ve liked a lot of Seth’s later work, but this one’s still my favorite.

Damn, I don’t even know where to go from here. I was able to watch this thanks to Netflix’s Instant watch and all kinds of youthful memories flooded back to me (the scene where he’s “surfing” on his bed, but imagining the California waves of his home? awesome). There’s also a really funny scene where Green’s trying on clothes for them to go on a double date. It’s you’re basic montage, but it’s almost identital to the one in Def By Temptation.

Anyway, I can’t recommend Airborne to everyone, but if you haven’t seen it and any of the following interest you at all, you should check it out.

Uh, huge spoiler as this is the end of the movie, but it’s AWESOME:

Anyone else unhealthily obsessed with this flick? I tried to get Em to watch it, but she kept making fun of me so I had to turn it off and finish it later.

One thing I recently realized is that there aren’t a whole lot of new shows coming out that I’m looking forward to. The new Christian Slater show looks pretty cool, so does Life on Mars, but they don’t start for a while. Mostly I’m excited for all the shows I dug last season to be back on.

MY NAME IS EARL (NBC)

Earl started off the season with an hour long episode (just like The Office) and it was a good one. Earl ended up helping Seth Green, who, a few years ago was on the Make a Wish program. Earl stole the horse he was supposed to ride in a parade. Thinking Seth’s character had died, he tries to make it up to his mom, but she reveals that Seth is still alive. So, to cross Seth off his list, Seth asks if Earl will help him film his awesome action movie, to which Earl agrees and everyone in town does too. There’s a great scene where Randy (Ethan Suplee) does a number of different impressions, including a dead-on Buffalo Bill from Silence of the Lambs. Great stuff. There’s a lot of fun, on the fly super low-budget filmmaking and Seth Green was fantastic as the excited filmmaker. There’s a pretty sad ending (which you can probably guess if you think about it, though I didn’t see it coming until about 2 seconds before). But man, what a great episode to a great show.

The Office is probably my favorite comedy on right now and definitely up there in my all time favorites (though the original is up there as well). As far as I’m concerned they’re pretty much separate animals by now. If you’re a fan, check out the deleted scenes on the DVDs for even more interviews with your favorite background characters (mine is Creed). The season premier had a lot of excellent moments. Spoilers ahead. The through story is that corporate offered the branch that loses the most weight three extra vacation days, so everyone’s trying to loose weight in different ways. So, unlike most episodes, this one takes place over a month instead of a day or two. Also during this time, Pam’s in New York for the summer for art school and Angela (who got engaged to Andy and caught banging Dwight in the season finale last year) continually gives Andy trouble in planning the wedding (though he’s so in love with her that he doesn’t care) and pages Dwight for secret trysts in a room in the warehouse. And the final, fist pumping super-spoiler is that Jim asks Pam to meet him halfway at a rest stop for lunch and proposes to her. I get giddy when stuff like this happens, so I’m looking forward to seeing how the rest of the season plays out.

As I mentioned before, I missed the previous two SNL episodes, but I was in last night and got to check it out. Anna Faris hosted and Duffy was the musical guest. As can be expected there were a number of political sketches, but I was impressed with the debate sketch because it didn’t seem to lean too much one way or the other. I think my favorite sketch involved Anna Faris and Keenan Thompson in a rowboat. I would link to it on Hulu, but it’s not on there unfortunately. I will say that there is singing, which I always enjoy.

I picked up Duffy’s record soon after it came out based solely on her first single “Mercy” which has been played to death on the radio (which is why I don’t listen to the radio anymore). Her performance was kind of weird. Her singing and her band were right on, but she had these weird sorta doo wop dance moves that came off as kind of robotic. Not sure what the deal was, if she was nervous or something, but it reminded me of when I saw Black Sabbath on their first reunion tour and Ozzy would do the same three or four things on stage over and over again.

I think this has been a pretty good period for SNL. The last few years have seen a bit of a shift in the kind of comedy they’re going for (thanks in large part, I think to Seth Meyers, Bill Hader, Jason Sudeikis, Andy Sandberg and plenty of writers I don’t really know about), so I’m looking forward to seeing what else they’ve got planned this year.