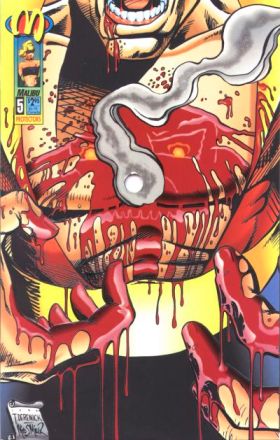 Man, what a batch of comics this week. I grew up in the age of die-cut, glow-in-the-dark, chromium and pretty much any other kind of crazy cover you can come up with. I gotta admit, there were definitely some cool ones, but Malibu’s Protectors #5 (1993) written by R.A. Jones  with Thomas Derenick artwork, was actually kind of legendary. As you can see in the picture here, it’s actually got a hole punched through it. The blood is also shiny and embossed, so that’s a lot going on.  I also thought that the hole was somehow incorporated into the story or artwork itself but that’s not the case at all, they only seem interested in mostly (not completely) avoiding characters’ heads and word balloons.

So, how’s the book? Eh. A superhero group called the Protects is going up against an armored Dr. Doom clone called Mr. Monday (?) who leads the Steel Army. A kid who took over the Night Mask identity from his dad winds up facing off against Mr. Monday and, well, you can see the cover, it’s actually a gigantic spoiler that undercuts the entire story (assuming you can really catch on to or know what’s going on).

The story doesn’t really try to bring new readers in, but it also doesn’t necessarily try to keep you out of it. It’s just hard to care, really. The names of these characters doesn’t help. You’ve got Man of War (not bad), the aforementioned Night Mask and Mr. Monday, Mighty Man, Air Man, Amazing Man, Eternal Man and Ferret. Woof. The art’s good though, Derenick’s doing a pretty serviceable Neal Adams-style riff, but he’s dealing with some pretty goofy costumes to match the names.

After my previous experience with a subpar issue of X-O Manowar, I almost threw this one right in the recycling bin, but then I noticed that Turok was in this issue. I actually liked the issue of Turok I read (the first) so I gave X-O #15 (1993) by Bob Layton and Bart Sears a read and it actually worked out that this lead right into that issue.

The issue finds X-O and Turok returning to the city after the big cosmic event I don’t seem to be privy to and don’t care enough to look up. Once there, they discover that the smart dinosaurs that Turok famously hunts are running loose in the sewers so a-hunting they go.

Unlike the other X-O issues I read, which was written by a different writer, this one doesn’t leave me confused and wondering what’s going on. X-O is from the past and has a cool suit of armor. Turok is from another dimension where smart dinos existed. They hut the dinos. I’m good. Layton doesn’t get too bogged down and offers a good solid look at both characters in a way that makes me interested in both of them.

I’m also a big fan of the Sears art. He did Justice League comics for a while, went on to do a ton of stuff for Wizard when I was a reader and seemed to have a lot of fun doing these Valiant book (he also did that first issue of Turok I dug). In this book the characters are big and mus thcly and stlyized, but it works when you consider who you’re reading about. Good stuff. I’ll keep this one around for a bit.

Lastly I came upon Marvel’s Brute Force #1 (1990) written by Simon Furman with art by Jose Delbo, a comic with an interesting history. Most people think it was a toy tie-in because Marvel was doing a lot of that in those days (and I’ll be coming across some in future installments of The Box), but the truth — as written over on Comic Book Urban Legends Revealed — is that Marvel came up with the characters in the hopes that one of the toy companies they were buddy buddy with at the time would bite. It didn’t work and the series wound up existing solely as four issues of a comic book.

So how is it? Not great. There’s a lot goin on here and most of it’s pretty ridiculous. The main bad guy sends clowns to steal a cybernetic bear, but said clowns are in the image of the fast food franchise he owns and runs. Not very smart. Anyway, the plot revolves around an environmentalist scientist who creates these cybernetic animals for some reason and then sends the remaining ones to bring back the bear. They each have a personlaity, set of skills and wacky way of viewing the world. It’s actually kind of fun. If this were a cartoon from the 80s I’d probably have a good time with it, but I think the act of reading makes me want the thing I’m exposing myself to to be better. Inetersting.

Anyway, the book is kind of like a nicer, far less violent and sad version of Grant Morrison’s Vertigo miniseries We3. I wonder if Morrison was a fan.

ANNIHILATION BOOK ONE (Marvel)
Written by Keith Giffen, Dan Abnett & Andy Lanning, drawn by Mitch Breitweiser, Scot Kolins, Ariel Olivetti & Kev Walker
Collects Drax The Destroyer #1-4, Annihilation: Prologue & Annihilation: Nova #1-4
Back in my days at Wizard, I wound up being the go-to guy for Annihilation interviews. I had just read Infinity Gauntlet for the first time and was pretty high on the idea of Marvel’s space characters getting a jump start. With very few exceptions, I had very little experience with these characters, so it was kind of fun to just be thrown into the middle of all this craziness and see where it went. When these issues were coming out, I had trouble not comparing the Annihilation set-up with that of DC’s Infinite Crisis. Both had four four-issue minis leading up to a main series. At the time it felt like Marvel did the whole thing better because their minis lead into the main series better. I can’t say I necessarily feel the same way now, but at least we didn’t have to get four one-shots to actually cap those stories. But, as usual, I’m getting a little ahead of myself. END_OF_DOCUMENT_TOKEN_TO_BE_REPLACED