On this week’s High Five Podcast I’m joined by not one, but two very special guests: my kids! On this one, the three of us discuss our favorite TV show watching experiences of last year. It might sound a little funky because it was recorded differently than the others, but I hope you’ll enjoy our takes on some of the best shows for families around! 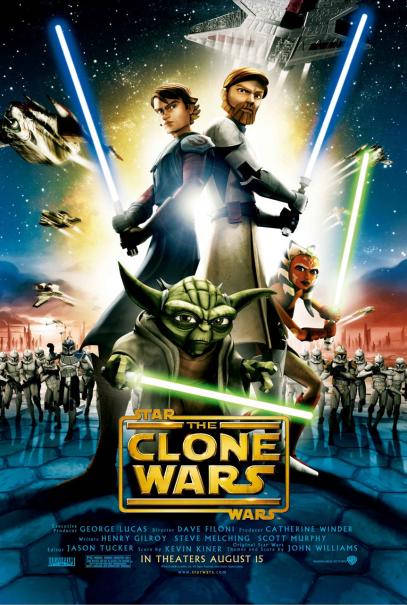 I’ve been on a pretty big Star Wars kick ever since I started writing the daily WTF Star Wars?! over on UGO.com’s The Goods section. I’ve actually been wanting to watch Empire and Jedi again recently, but didn’t thanks to being so busy pre and post vacation. Anyway, I did add the CGI Star Wars: The Clone Wars to my Netflix queue (though the missus and I are STILL waiting for the second disc of David Tennant’s last Doctor Who movie) and got around to watching it last night. I hadn’t really heard great things about the movie, mostly surrounding Anakin’s padawan Ahsoka being kind of annoying, but overall I thought it was a pretty good movie.

The action scenes are spectacular. It’s awesome seeing lightsaber duels done in a manner that truly reflects the skill and ability of the characters involved. I had never thought about it before, but Jedi and Sith Lords are basically superheroes, so they should move as such. The video games really nail this, while the original films don’t so much, but it’s fun to see it in an actual movie.

On the subject of Ahsoka, I didn’t find her annoying at all. Yeah, she’s a teenager and I guess that might get on some people’s nerves, but guess what? Luke Skywalker was annoying as hell! Don’t forget about that.

The story’s kind of simple, which isn’t really a bad thing as this is definitely aimed more at kids as a lead-in to the Clone Wars cartoon on Cartoon Network which I wish was on Netflix Instant. Jabba’s in it, so points for that.

My one big complain is the voices, specifically one: Obi-Wan’s. It’s been a while since I’ve watched Episodes II or III, but James Arnold Taylor seems to be doing a exaggerated impression of Ewan McGregor that just comes off as silly and over the top, which is a shame because all the other fill-in voices seem dead on. I actually had to look up to see whether Natalie Portman returned to voice Padme like Sam Jackson, Anthony Daniels and Chrisopher Lee had done for Mace Windu, C-3PO and Count Dooku respectively, but alas, it was another. So, all in all, Clone Wars didn’t completely quench my thirst for more Star Wars, but it did seem like a worthy entry in the series and, from what I hear, has lead to a pretty great series that I want to check out, so well done!