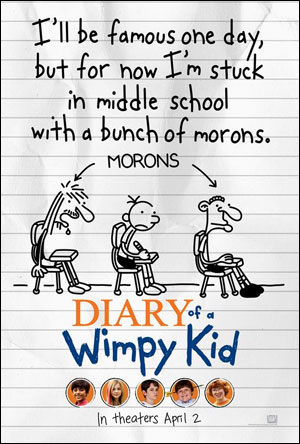 As I mentioned earlier this week, I had a wonderful time reading the five Diary of a Wimpy Kid books, so checking out the movie was a logical next step. One of the questions I asked author Jeff Kinney when I interviewed him for MTV Geek about the latest volume was whether it was difficult coming up with actors to match his cartoons. He said something along the lines of trying to match the spirit of the characters to the actor and hopefully getting a close enough physical match. I’d say everyone involved with the Wimpy Kid flick did a pretty damn good job of it.

Zachary Gordon does a great job of capturing Greg’s innocent arrogance, Robert Capron nails Rowley’s youthfulness, Grayson Russell looks EXACTLY like Fregley and Devon Bostick works pretty well as Greg’s jerky older brother Rodrick. I wasn’t as sold on either of Greg’s parents though, Steve Zahn as Dad and Rachel Harris as mom just didn’t work for me. Zahn just doesn’t seem like dad material to me because I’ve seen and enjoyed him in movies like Saving Silverman, but more importantly–and offputting as a fan of the books–is that Mom and Dad don’t match up very well between the book and the movie. Even with Dad doing his weird Halloween ritual and Mom giving her speech about girly mags to Rodrick intact, there was something missing from the characters that I couldn’t quite place, but definitely felt.

I loved seeing the above gags in the film along with other parts like the trick or treating and ball-vs.-bike game, but one thing that Kinney mentioned to me that I think makes up the biggest difference between the books and the movie is that he tends to write gags that he links together whereas, with a movie like this, there has to be more of a story and plot put into place, which meant some things needed to be moved around, which I didn’t have a problem with. It’s the additions to the movie that left me scratching my head. For instance, I understand what the addition of the Angie character was supposed to show that not everyone needs to try and go for popularity, but as far as the story goes, she doesn’t really serve any purpose. I also didn’t like the mother/son dance scene because, very frankly, no one would applaud the weird synchronized dance Rowley did with his mom, especially a bunch of grade school boys.

Those complaints aside, I still liked the movie as a whole. I was pretty deep into liking it when they broke out with “Total Eclipse Of The Heart” which is one of the all-time greatest jams of all time. The almost-fight scene at the end of the movie between Greg and Rowley was hilarious, though I wasn’t a big fan of how they brought the older kids back in the middle of the day at a school and made Rowley eat the cheese (in the book, no one else is around). I’m also not a huge fan of Greg giving that big speech at the end of the book because I feel like that character wouldn’t do anything to risk losing whatever popularity he had by making a Mean Girls-like closing speech. But overall, it was fun to see a lot of my favorite gags from the book up on the big screen and I’m looking forward to future installments.

Anyone else catch the Wimpy Kid balloon at this year’s Macy’s Thanksgiving Day parade? At first I didn’t like the look of the character with his nervous-looking mouth, but then I got the joke: he’s supposed to be worried that his handlers are going to drop him. At least, I think that’s the joke. Anyone have a better idea? 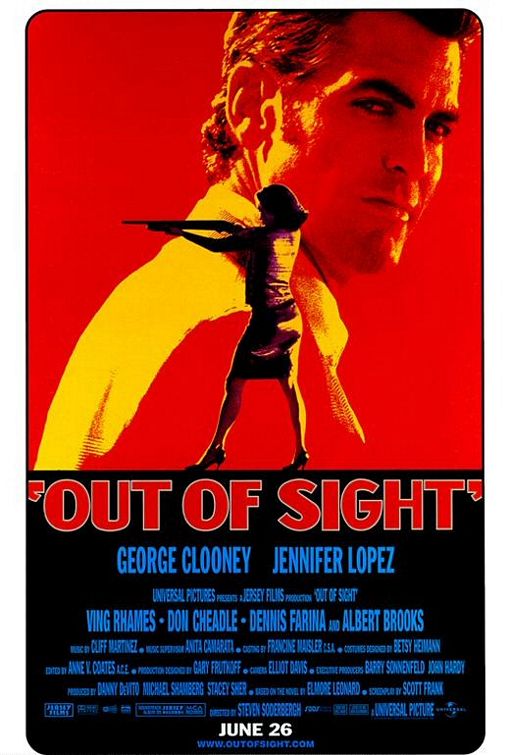 I had seen Out Of Sight once in high school. We were all hanging out at my friend Charlie’s house and goofing off, so no one was really paying attention. I do remember the part where the big guy trips while walking of the stairs and shoots himself through the head. I laughed pretty hard and got a few funny looks, but what are you gonna do? I also remember making jokes about the soundtrack. It sounded like there was a 70s porno soundtrack band following the main characters just off screen. If I remember correctly, those jokes killed. Watching this movie again after about 10 years (sheesh) and having read a good number of Elmore Leonard books, I really enjoyed it. One thing I’ve noticed about the last two movies I’ve seen based on his movies (this one and Jackie Brown) is that they’re very long, maybe a little meandering and very interesting. I actually got really bored with Jackie Brown and turned it off, but Out Of Sight really nailed Leonard’s tone in my opinion. Plus, it stars George Clooney who’s one of my favorite actors and reminded me that Jennifer Lopez was actually a pretty good actor once upon a time. I guess I should mention the plot. Clooney breaks out of jail, kidnaps and falls for J Lo, lets her go and then goes to rob a house in Detroit. The idea is that the forced intimacy of being locked in a trunk together is what sped up their attraction to each other and lead them both to making questionable decisions when it comes to their professions (she’s a law enforcement agent of some sort and he’s a thief) which also lead to some pretty steamy scenes, though no nudity on either account. You also get the added bonus of performances by Don Cheadle, Steve Zahn, Ving Rhames, Albert Brooks and Michael Keaton who plays the same character as he does in Jackie Brown. I can see how some folks would think it’s slow (it IS 123 minutes long), but if you’ve got the attention span for a slow burn this Steven Soderbergh-directed flick might be right up your alley.