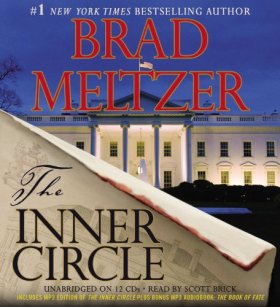 Every time we go on a road trip of any real length, my wife and I run over to the library and get an audiobook or two. Before leaving to visit her folks for Christmas, I picked up Brad Metlzer’s The Inner Circle which wound up serving us for two separate trips. I actually had no idea what the book was about, I just saw Meltzer’s name and grabbed it. It turns out, however, that it’s actually a kind of sequel or follow-up to the last of his books we listened to in audiobook form: The Book of Fate.

This time around, the story revolves around normal guy Beecher who uncovers a potential secret spy ring built around the president while trying to impress a woman from his past. As things tend to go in Meltzer novels, the ensuing 12 discs revolve around healthy doses of mistrust, misinformation and misunderstandings all while conveying action and drama the never fails to keep me interested. I should note that I actually forgot very little of the plot in the nearly three months between starting the audiobook and finishing it, which is a testament to the story.

The character who carries over from Book of Fate, though, is the one who really steals the show: Nica Hadrian, the man who tried to kill the president in that book. I had no idea he would appear in this book and would love to talk to Meltzer about why he decided to bring him back, but I think I have a pretty good idea. This guy’s just a super compelling character. He’s belfry-level crazy thinking his last victim still talks to him and also believing in ages old historical conspiracies that continue through reincarnation. But he’s also incredibly smart and has his own set of physical skills that made him such an effective killing machine. He’s basically Batman, but crazier and convinced that the world has an order to it, something I’m not so sure can be said about the Caped Crusader.

Something else I didn’t realize when I picked this book up from the library is that Beecher’s story actually continues on in Metlzer’s most recent book The Fifth Assassin. But don’t worry about this being an Empire Strikes Back kind of situation where you get to the end of this book and feel like you’ve been given part of a whole rather than a whole story. Inner Circle definitely has a solid ending, but also goes on to set up some real potential I’m excited to see explored when we get around to listening to Assassin.

Once again, I was super pleased with my experience listening to or reading a Brad Meltzer book. That guy really writes the kinds of stories I enjoy, constantly keeping the wheels on his “regular guy put into extraordinary situations” thrillers. That’s actually one of the reasons I’m interested in checking out the sequel. Beecher fit a similar model that I’ve seen in other Meltzer lead characters, but he’s presumably more trained and confident in Assassin, so I’m definitely curious to see how that plays out.