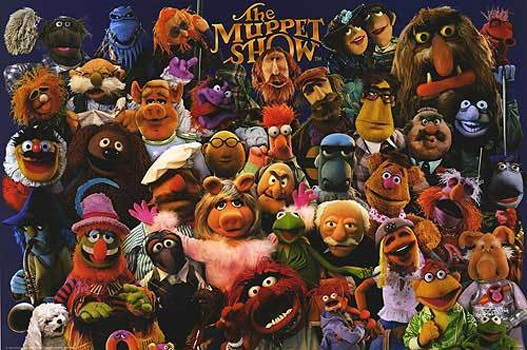 As I said in my post about the excellent film The Muppets, I missed out on most of The Muppet Show. The series started off and ended before I was born and wasn’t on in reruns that I remember as a kid. I did, however, love The Muppet Babies, but that series focused on a much smaller group of characters. Between The Muppets and Being Elmo, though my curiosity was piqued, so I moved the first disc of the first season of The Muppet Show to the top of my Netflix DVD queue and watched it with my wife and daughter last week.

The amount of creativity and humor that went into the series is mind blowing. It actually reminds me a lot of the early seasons of Saturday Night Live, which only kicked off a year before the Muppets finally made it to air in 1976. Note that SNL actually featured Jim Henson Muppets as well for the first season or two.

Anyway, I had a lot of fun with the first disc even if I didn’t recognize many of the celebrity guest hosts or the Muppets themselves. There’s just so much pure creative force coming across from Henson, Frank Oz and the rest of the gang. The sketches are funny on their own and would be even with human actors, but when you take into account the fact that these guys were literally creating these characters on the spot, giving them voices and personalities and make a show every week, that’s even more impressive. I’m inspired by that kind of creativity.

Like I said, I’m still new to The Muppet Show, but I’m excited about slowly making my way through it. I’m looking at it like any other sketch comedy show, which is an area of television that I’m looking to explore more fully outside of SNL. Should be a fun journey.

“Baby, It’s Cold Outside” is officially my favorite Christmas song. It’s also the one standard that’s been in my life the shortest period of time. Somehow, I have no recollection of this song before hearing Zooey Deschanel and Will Ferrell sing it in 2003’s Elf. I was instantly hooked and not just because of my (at that time) newfound lady crush Ms. Deshanel. I did a little research (ie typed the song’s title in over at Wikipedia) and found out the song was written by a guy named Frank Loesser back in 1944 to sing with his wife at holiday parties. He eventually sold it to MGM and they used it in a 1949 movie I’ve never heard of called Neptune’s Daughter. Since then tons and tons of people have taken a crack at singing this duet. I did some searching on YouTube and here are a few of my favorite renditions.

Zooey & Will in Elf.

Rainn Wilson & Selma Blair switch gender roles in this Gap video from 2008 that I don’t remember.

Tom Jones & Cerys Matthews. This video is weird, like something out of Twin Peaks.

Lady Antebellum last year on Today. Skip to about 1:25 for the actual song.

This one’s only audio and pictures, but you can’t go wrong with Dean Martin & Martina McBride.

Rudolf Nureyev & Miss Piggy on The Muppet Show (again, switching the parts) in the steam room.

There was also a version on SNL back in ’86 sung by Sigourney Weaver and Buster Poindexter that I’d like to see. Well, I’m off to dinner, have a good one!