A few weekends back we found ourselves in the enviable position of experiencing a light snowfall without much else to do so we decided to scroll through our On Demand options for a family movie. As it turns out we have free Showtime for a bit and The Rocketeer was on there, so we decided to give it a watch.

I don’t remember if I saw this movie in the theaters when it came out, but we did subscribe to Disney Channel back then (long before it was free) so I remember seeing a lot about it and probably caught it on TV.

Set in 1938, it’s about a stunt pilot named Cliff who discovers a rocket pack in his plane, designs a costume and helmet and fights bad guys including local mobsters (lead by Pau Sorvino) and movie star Neville Sinclair (Timothy Dalton) all while trying to keep things going with his girlfriend Jenny (Jennifer Connelley).

Directed by Joe Johnston who went on to eventually helm Captain America: The First Avenger, the movie not only works as an action-packed superhero film, but also a fun period piece that references a number of classic actors, actresses and other historical figures from the era (including Lost star Terry O’Quinn as Howard Hughes!). Add to that that real-life elements like potential Hollywood stars working with the Nazis and mobsters refusing to do the same and you have a great film that holds up really well aside from a few clunky special effects scenes here and there.

As a kid, I had no idea who the Rocketeer was before the film hit, but now I know that it was an indie comic book created by Dave Stevens in the 80s during that boom. However, I never got around to reading the actual comics until last year when I got my hands on the IDW-published reprint of Stevens’ entire run

, though I was more interested in the pictures. You really don’t need to read the words because the art is just so crisp, clear and expressive. Plus, the colors in that book are just amazing. I don’t know how they compare to the original, but imagine they’re much better given IDW’s reputation for doing super high quality reprints and today’s far better printing techniques. 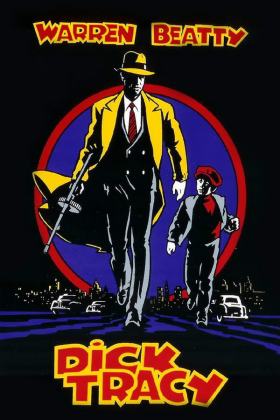 While scrolling through the options to get to The Rocketeer, I also saw Dick Tracy as an option. I LOVED this movie as a kid and realized that, given the obvious similarities, it would make for an excellent double feature mate with Rocketeer.

Based on the classic comic strip created by Chester Gould in the 1930s, Dick Tracy was directed by and starred Warren Beatty as the yellow-clad copper. He’s joined by Charlie Kormo’s The Kid, Madonna’s Breathless Mahoney, Al Pacino’s Big Boy and a variety of others as Tracy attempts to bring the mob boss down while keeping his relationship with Tess Trueheart (Glenne Headly) together and figuring out what to do with his new ward.

The beauty of this movie is that Beatty went full boat when it came to recreating the look and feel of the comic strips on the big screen. The suits and cars are all wildly colorful, matte paintings give the world an ethereal feel and the bag guy make-up brings characters like Little Face, Flat Top and Pruneface fully to life. Add in the idea of a kid trying to constantly get in on grown-up cop action, the pseudo love triangle with Breathless and the mystery of No Face and you’ve got a super fun and compelling movie that doesn’t get enough kudos from the comic-loving crowd.

As I mentioned, I was a huge fan of this flick when it came out. I definitely remember seeing it in the theater and as scenes appeared on my TV I remembered them from that viewing experience as well as moments captured by the trading card set. That feeling has lingered to this day when I basically want an Apple Watch just so I can feel like Dick Tracy (anyone else remember the wrist watch walkie talkies they sold?).

My four year old daughter slept through most of the first film and was looking at Disney princess dresses during the second, but I’m not sure if I’d recommend these for kids her age. Given the presence of mobsters, shooting, concrete and Madonna’s crazy dresses, it might not be appropriate.

That reminds me. I’m not a fan of Madonna’s outside of this movie and A League Of Their Own, but man, she just KILLS it in this movie. I’m sure I was dazzled by her sheer dresses as a kid, but this time around I really found myself feeling bad for her when she was ever so desperately trying to convince Dick Tracy to love her. Her character adds an interesting intensity to this film that just adds to the overall unique nature of a project that could have easily become what all the terrible late 90s comic book movies turned into: exaggerated cartoons with no concept of what made the source material work.

So, while these might not be the best movies to show a couple of kids (like we did), they are a ton of fun and act as a kind of vanguard for quality comic-based films that would come a decade or so later.