It seems impossible to tell if Nicolas Cage is a good actor. Instead of playing a character, he just controls how much of his inner lunatic he decides to let the camera see. Drive Angry from director Patrick Lussier (Dracula 2000, the My Bloody Valentine remake) lets Cage unleash the full flow of insanity as Milton, a guy who escaped hell to get revenge on cult leader Jonah King (Billy Burke), who killed his daughter and snatched his grandaughter. Along the way he teams up with Amber Heard’s Piper, a tough young woman without much going on in her life aside from a cheating boyfriend and a crappy waitress job. As they operate their automobile in a perturbed fashion, Milton and PIper also have to stay several steps ahead of The Accountant (William Fichtner), an agent of Hell looking to bring back the escaped Milton.

Lussier — who co-wrote the script with Todd Farmer (Jason X, the My Blood Valentine remake) — does a great job of having fun with this story. It’s not overly gory, but plenty of blood is spilled and bullets fired. The gore effects that do exist look just as gross as they should considering the wounds inflicted and the over-the-top style of the film. While the movie doesn’t get into hand-to-hand combat too often there’s plenty of excellent driving scenes, lots of gunplay and a few run-ins that show just how silly it is for regular ol’ humans to go up against supernatural entities. 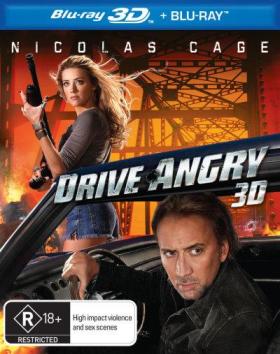 Actually, Heard gets her fists dirty more than anyone else in the movie and does a pretty serviceable job going up against dudes much bigger than her. She smacks around the woman her boyfriend’s cheating on her with before trying to give him the business end of an ass kicking. Later on, she throws down with King on an RV. After saying he’s going to kill her she drops this fantastic bit of dialog: “Between now and then, I’m gonna f*ck you up.” You might not think it to look at Heard in her other roles, but she delivers it like she means it, then backs it up. Good for her.

When it comes to the chase scenes, of which there many, Lussier gets pretty inventive with the car-eography. After a lifetime of watching car chases on television and in movies, they can get a little boring, but this one uses a lot of fun elements like the Accountant driving a Hydrogen truck into a small army of cop cars, stepping out on a truck and Milton driving just so to avoid the explosion. Sure, it looks a little CGI-y on Blu-ray, but it’s over pretty quickly and the idea is cool enough to outshine some execution flaws.

Speaking of of the Blu-ray presentation, it’s possible this movie looks too good. This is completely subjective, but since the film takes a lot of its cues from the grindhouse flicks of the 70s,  you sometimes want it to look a little less clean and pristine. It’s kind of like listening to a completely remastered version of a live Ramones show. Everything’s still there, but the grit is gone. That’s not to say this is a clean movie, there’s lots of death, carnage and nudity to go around, it all just looks really crisp and clear.

A few other highlights from the film include Tom Atkinson’s role as a local police captain. That guy’s pure gold in everything. Speaking of being great in everything, watching Cage and Fichtner on screen together is delightful. The fact that this is an original story with some big stars and a fairly good effects budget is also cool and something we’re seeing less and less of at the movies. After being disappointed with how Parker didn’t add much to the revenge/heist genre, it’s good to watch something like Drive Angry that did as much as it possibly could with the materials available.

Finally, did anyone see this in 3D? It was shot that way, but the Blu-ray rental from Netflix didn’t have the option. Drop a comment and let us know.