Happy New Year everyone. I decided to celebrate by compiling a series of lists celebrating my favorite films and shows of 2017. Sounds like pretty standard stuff, right? Yup, totally. However, these lists will include not just new films from last year, but new-to-me ones that I enjoyed. This one celebrates the glory of big screen blockbusters, most of which I saw on the small screen because, you know, kids.

First off, I’d just like to reiterate how much I enjoyed Gareth Edwards’ Godzilla (2014) and San Andreas (2015) from director Gary Peyton.  I had a great time watching both of those movies earlier this year and highly recommend checking them out if you’re looking for big budget disaster fare. I also had a silly amount of fun watching Vin Diesel in 2015’s The Last Witch Hunter helmed by Breck Eisner. I think this will make a great weekend movie tune-in type of movie.

END_OF_DOCUMENT_TOKEN_TO_BE_REPLACED 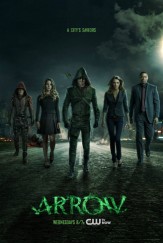 Not a day goes by that I don’t think,”Gee, I should blog about this thing I just read, watched or saw that I really dig.” For me the reason for this blog is two-fold. First, I want to let people know about cool things that they might also enjoy. The second is as a kind of pop culture digital back-up memory. With both goals in mind, I think I’ll take to this format of quick hits every week (maybe, we’ll see).

END_OF_DOCUMENT_TOKEN_TO_BE_REPLACED

Marvel Studios is rolling out the PR juggernaut for the next film Thor: The Dark World. The movie opens on November 8th. This latest TV spot shines the spotlight on Natalie Portman’s Jane Foster, her concern for Chris Hemsworth Thor and her contempt for Tom Hiddleston’s Loki.

So, technically this is a clip and not a trailer, but it seemed to fit with the theme pretty well. The very first clip from the first episode of Arrow‘s second season features Diggle and Felicity reuniting with Arthur  on the island. The episode debuts on The CW, October 9th at 8:00 PM. 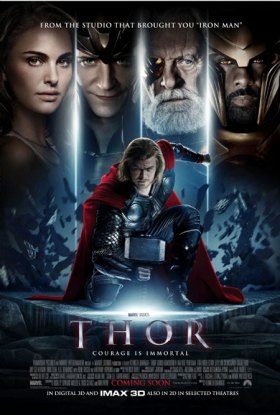 I feel like a bad geek. Three pretty well regarded comic book movies came out this summer and I didn’t see any of them in theaters. Younger me would be in there opening weekend, if not at a midnight showing. Ah well, I’m a dad now, I guess that counts as a good enough excuse. Anyway, the wife and I finally got around to watching Thor the other night after the DVD sat around from Netflix for a while (bumping down to one at a time has been rough).

The movie was good. The cast was fun and interesting, but what else would you expect from a Kenneth Branagh film starring Anthony Hopkins, Idris Elba, Natalie Portman, Ray Stevenson, Kat Dennings and Skellan Skarsgard? Even Chris Hemmsworth who I knew nothing of did a good job with the character of Thor, balancing out the brash warrior and “needing to learn a lesson about life” student.

I think what kept me from loving the movie stems from the fact that I just read and flipped through a big stack of Thor comics from the late 70s/early 80s and discovered that nearly every Thor story is the same: something big and evil happens, Thor rushes in and Loki tends to be behind it. Meanwhile, Odin’s usually being tricked or is asleep and the god of thunder deals with some small human problems that are supposed to show how good of a guy he is while also not really posing any kind of danger. I’m sure there are plenty of Thor stories that don’t follow this model, but I was surprised to see how many of them do.

So, with those in my head, I wasn’t surprised to see a movie where Loki was ultimately the bad guy, Odin sat out most of the movie and Thor wound up proving how good of a guy he can be. It was interesting watching the movie with the missus though as she’s never read anything having to do with the characters and yet she called Loki as a bad guy about 10 minutes in. It made me realize that the uninitiated would definitely go into this movie differently than the comic fans and would possibly enjoy it more, but I also thought it was interesting that it was kind of “on the page” as it was.

As far as the Marvel movie universe building goes, it was fun to see Hawkeye have his scene and the SPOILER appearance of Nick Fury and the Cosmic Cube at the end of the movie. I’m not sure what to believe when it comes to the Avengers movie, but it would be rad to see that come into play. If so, it’s pretty cool that the ante will truly be upped.

At the end of the day, I liked the movie, but thanks to my recent reading adventure was already keyed onto the story. I think, had I watched it when it came out or maybe even a few months from now, I’d dig it more. At the end of the day, it’s a solid movie with a great cast, some really fun and funny moments, maybe not as much action as the Thor movie in my mind had, but a great appearance by the Destroyer and some cool looking Frost Giant battles. Plus, watching a guy beat bad guy ass with a hammer just never gets old. Now, when do the Warriors Three and Sif get their own movie? That, I want to see.