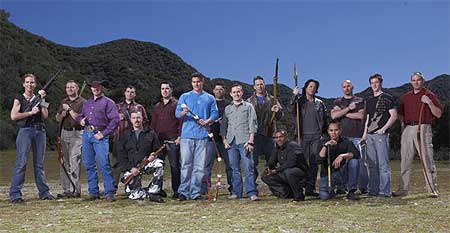 Okay, I don’t exactly agree with the headline I just wrote, but it was just too good to pass up. I like the concept behind History Channel’s Top Shot which brings marksmen and women together from all different disciplines, puts them on teams, gives them challenges and then makes the losing team vote two people in to shoot for their change to stick around. But, it’s not a perfect show by any means and the fault lies firmly on the History Channel.

The biggest problem the is that they ruin the final challenge almost every time they show an episode. I first noticed this while watching the first two episodes. I saw them as reruns and both times at the end of the show during the commercial breaks of the final challenge to see who gets to stay and who goes home, History showed a preview for the next episode featuring the winner! I thought it might have just been a rerun problem which is forgivable, but then last night, when watching the new episodes (which featured archery and fire!) that same thing happened! It’s the final throwdown between these two dudes using crossbows, it’s neck and neck and you’re wondering who’s going to win. They cut to commercial to raise tension and during the break they tease the next episode, showing one of the guys very early in the ad. Great. Thanks for killing all the tension from your show.

The other problem I have with the show is that it’s trying to make drama or at least focusing on it too much. I don’t tune into a History Channel competition show to hear one guy badmouthing another one because the kid made an offhand comment about divorce and then apologized for it. Seeing a grown man hold a grudge against a 20 year old kid is fine for a Bravo show, but just makes me want to turn off one involving guns being shot from a chair lift (the final challenge for the second episode). Stop making me want to turn this show off and ruining the ending History Channel!