On this week’s episode, I’m running down a quintet of action movies that feel like comic book movies, but without existing source material. I had a great time putting this list together and a lot of fun watching these movies. I hope you do too!

Of all of these, I’ve written about the Universal Soldier franchise the most including the original, The Return and Day Of Reckoning. 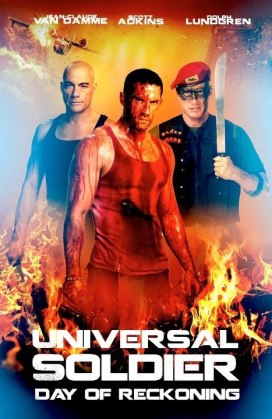 Color me impressed because I keep getting surprised by action movies. First The Raid not only lives up to but surpasses my expectations and now Universal Soldier: Day Of Reckoning comes out of nowhere and proves to be a masterful piece of next level action film making.

I first started seeing bits and blurbs about this movie because I follow both Dolph Lundgren and Magnet Releasing on Twitter. It seemed like people really enjoyed the film and that it might be doing a few different things with a franchise I’m somewhat familiar with. Still, I figured it would be a capital A awesome movie with lots of cool fight scenes and probably a little romance here and there with references to the other films I might not catch because I’m far from a super fan.

But this movie is really something different and you understand that immediately thanks to the way director and co-writer John Hyams starts the film. Immediately just by the visuals, you can tell you’re not watching some straight to video throwaway because this film looks great (more on that below). In addition, the tone is set to be both unnerving and disturbing by doing a first person POV shot of a dad played by Scott Adkins looking through his house trying to prove to his daughter that there are no monsters lurking about. “No monsters,” he repeats several times until he gets to the kitchen where masked thugs are waiting to attack him. Things get worse from there. A lot of these kinds of movies try to make an emotional impact, but you can tell right off the bat that you’re dealing with an excuse to string fight scenes together and kind of check out on that level, but that does not happen with Day of Reckoning. Yes, there’s some emotional terrorism to get me invested, but I’m a husband and father now, so it worked like it was intended to.

The story itself revolves around Adkins who slowly realizes he’s a Universal Soldier sleeper agent thanks to the events in the aforementioned opening. As he goes into the world it becomes clear that he’s not the only one. We also discover that Jean-Claude Van Damme is still around, finding activated Soldiers and giving them the ability to think for themselves. His pal — and fellow star of the original 1992 film — Dolph Lundgren is kind of the den mother of the wild bunch of “freed” Soldiers, treating the whole thing like a religion. Speaking of JCVD and Lundgren, these guys are fantastic in the movie. Van Damme looks scary as hell both in face and deed. Some of these 80s and 90s action movie guys still do these kinds of movies but look like 20 pounds of sausage in a ten pound leather casing, that’s not the case with Van Damme though, dude’s still got it. He could play a comic book supervillain easy after this role. Meanwhile, Lundgren gets to do his loud, boisterous thing and have fun chewing some of the scenery, but he also looks good in his fight scenes.

Speaking of the fight scenes, they’re rad, realistic depictions of super fighting. The scene in the sporting good store is ridiculously awesome. Fighting with bats is one thing, but throwing bowling balls at each other and hitting the bad guy with a  bench press weight all with this super fast, kinetic filmmaking that doesn’t rely on shaky cam nonsense is incredibly refreshing. You’ll also notice that our hero becomes a better fighter as the fight progresses and his muscle memory takes over. This is where he begins to figure out who he is.

Part of what sets this movie apart is the way its filmed, cast and set. I watched it on Blu-ray so it looked fantastic on that level, but there’s also a lot going on in just about every frame. Places like the strip club and sporting good store look like they would in real life: colorful and filthy and colorful and dull respectively. Then you’ve got the cabin seen a little over halfway through the film. These are places that could have been made to look overly produced and fake, but that’s not the case.

All of that adds to the idea of this film being, essentially, a real world based superhero film. The Universal Soldiers are essentially Captain America-like super soldiers running around doing their thing, so they’re not just peak humans, they can do amazing things like throw bowling balls around like tennis balls and take obscene amounts of punishment. We’ve seen incredibly good super-fighting in movies like Iron Man and The Avengers, but this is a much more down and dirty version that I think would work better for street-level heroes. Don’t be surprised if Hyams gets tapped to do a franchise superhero film in the next few years. Maybe something with Moon Knight or Nightwing? 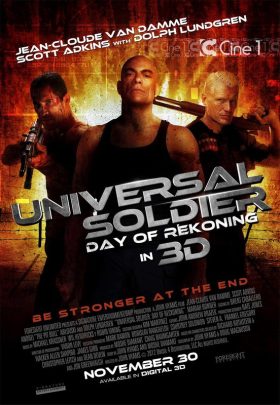 I want to talk a little bit about the reveal that comes a little towards the end of the movie, so let’s call this paragraph a SPOILER ZONE. We learn along with Adkins that, not only is he not the only guy who looks exactly like him in this world, but that he’s only a few weeks old, meaning that his memories aren’t really his own. He was grown and given these specific memories in an attempt by the government to make a living weapon designed to specifically hate and kill JCVD’s character. I didn’t mention it above, but JCVD was the guy who kills Adkins’ wife and daughter right in front of his eyes. But, as it turns out, he didn’t really do it. It was all a ruse. I slowly figured this one out as the movie went along — it seemed weird that he was in such a strange hospital with no one else around — but I think I only really put it together because I paused the movie halfway through last night and finished it today. Anyway, this is an interesting idea because our hero discovers that his main motivation for going after JCVD isn’t actually real even though he has dealt with all those motions and memories. Essentially, it feels real even though it wasn’t. How that gets dealt with is a really interesting aspect of this film.

As you can probably tell, I really liked this movie. I’m having trouble accurately comparing it to anything. It’s serious and psychological like a Christopher Nolan film, it’s got grittiness and superhero elements, but also fight scenes that blow plenty of others out of the water. All those things combined into something like this, to me, is next level. It also makes me want to go back and check out the previous Universal Soldier movies. I know I’ve seen the original and maybe 1999’s The Return (which is on Netflix Instant), but not Hyams’ previous entry in this series Regeneration. Time to update my queue!