Venom Brave and the Bold 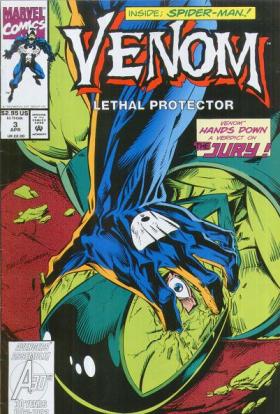 To be completely honest, this installment of The Box is a bit of a cheat. First off, I read a pair of terrible comics I literally have nothing to say about. I won’t say what they were, but they were both mid 90s Image books that did nothing for me. I don’t want these posts to be completely negative and I also want to have some fun, so those books went right into the recycle bin. I also actually specifically purchased the latter two books at a flea market, so they’re not as random as the other picks, but we’ll get back to that next week, I’m sure. Did I succeed at picking out good comics for myself to read? You’ll have to read (or scroll) on down to find out.

The one random comic from this post is Venom: Lethal Protector #3 (1993) written by David Micheline and drawn by Mark Bagley. Venom’s not a character I’ve ever really been into, but there was always something a little cool and dangerous about seeing these comics in the pages of Wizard or on comic stands when I was looking for the books I wanted.

This issue really has all the components you’d expect from a 90s comic starring Venom. He cracks wise while beating up on bad guys wearing a LOT of armor. There’s actually a solid story underneath all that with a guy trying to get revenge on Venom for his dead son.

Overall, it’s a fine story. I think it’s hard to take a book with so many spikes and pouches seriously these days, but that was the mode of the day. On the other hand, though, Bagley’s art doesn’t look as jagged and crazy as a lot of the popular artists of the day. He is just a damn solid, classic style artist that looks rad no matter what he’s drawing. I won’t be keeping this comic nor will I be tracking down the rest of the issues, but it was a fun read for a few minutes and now I’m ready for the next thing. 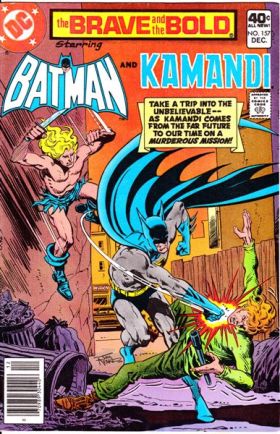 I chose this comic for one simple reason: I wanted to see how Jack Kirby’s Last Boy On Earth found his way to Gotham to team-up or tussle with Batman. Brave And The Bold #157 (1979) was written by Bob Haney with Jim Aparo artwork and unfortunately, it’s pretty boring. The story revolves around a new super powered enforcer on the scene and Batman trying to figure it out. However, since we know that Kamandi’s in the issue and doesn’t show upfor a while it’s not much of a surprise that it’s him.

The worst part though is that the scenes between Kamandi and Batman just aren’t that fun or interesting, I just kept thinking about how much cooler this issue could have been or how rad the team-up between the two of them was on the wonderful animated version of this comic from a year or two back. It also sounds like the BATB issue where Batman goes to Kamandi’s time was a lot more interesting.

I think even if I wasn’t comparing this issue to those other stories that I wanted, I still would have hoped for less Batman-talking-to-people and more Kamandi-punching-people. I’m just simple like that, I guess.

It was neat seeing Aparo draw Kamandi, though. 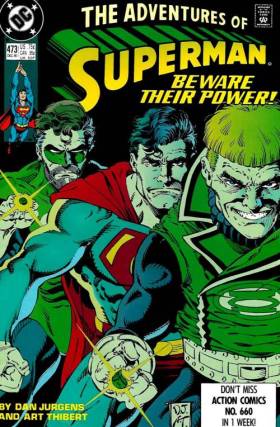 I grabbed this issue of Adventures Of Superman #473 from 1990) because it’s not part of the wonderful Man Of Steel trade series, it has Green Lanterns in it and that Dan Jurgens cover sure looked neat!  Written and drawn by Jurgens, the issue was great looking, but it was the kind of story I’ve read before. Basically Hal Jordan’s being held captive by a giant alien who crashed and remained underground for many years. He sens out a distress signal for Superman who winds up teaming with Guy Gardner. Unfortunately, this is also the version of Guy that really grates on me: the asshole loudmouth who never shuts up. I’m more a fan of the confident, but layered version Beau Smith wrote in Guy Gardner: Warrior.

So, while the main story felt like something else I’d read (another Superman story? something with the Fantastic Four?) I was actually more interested in what was going on back at the Daily Planet because this was right after Lois and Clark got engaged the first time. I came to Superman a few years after this when he was killed, but a lot of what was going on in issues from this time were referred to when I came on and even well after Supes returned.

While I wasn’t really ennamored with this issue, I will hold on to it. I kind of want to fill all the post Crisis Superman holes that exist between the existing trades and when I started collecting. Just thinking about that makes me a bit sleepy.