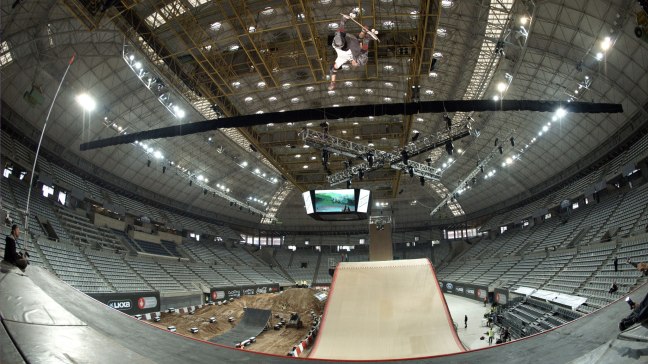 Two years ago I wrote a post about how I thought the X-Games is awesome. I still agree with everything I wrote there, but have found a completely new and different reason to love these games: inspiration. I find it amazing how men and women can devote themselves to any particular activity, hone themselves into machines and perform that activity to the best of their ability. I appreciate that level of skill in everything from football and film to singing and skateboarding. Plus, what better expression of independence is there than rocketing down a ramp and doing flips in the air?

When I watch the X-Games, as I did this past weekend when the now-touring event hit Munich, I was constantly amazed at the level of skill these people achieved to do amazing things, conquering previously held rules in the process. Humans aren’t supposed to launch themselves dozens of feet in the air and land safely. They’re even less likely to do the same thing, not land correctly and walk away alive. These are people who see a challenge and attack it with everything they have until they either conquer it or, well, break.

I’ve done my best to catch the last few X-Games contests and the event that I love the most is called Big Air. This is when a skateboarder or BMX rider comes down a gigantic slope, hits one of three ramps, flies over a big gap while doing a trick, lands on another ramp and then hits a half pipe that’s also gigantic only to throw a second trick. Above you can see Chad Kagy’s Gold Medal-winning run from this year’s BMX Big Air contest (for a first person POV view of the whole thing go here). But, the guy who’s really captured my imagination during the past two games has been skateboarder Bob Burnquist, who’s 36 and not only still winning Gold Medals, but also beating kids, half and two-thirds his age (Munich Bronze winner Tom Schaar is 14 while fourth place winner Jagger Eaton is only 12!).

The fact that Burnquist has stayed healthy enough to keep competing consistently in a sport he loves is inspiring to me as is just about everything I saw everyone do during Big Air. It’s basically humanity saying, “Forget you, nature, I’m going to figure out a way to fly.” I love that spirit and have tried using it as a way of driving me to do the things I love. I currently have the image at the top of this post as my desktop wallpaper because it makes me think, “If this dude can do something crazy like that, I can write a few pages today.” Sure, it’s a little cheesy, but it’s better than one of those “Hang in there” posters with a cat, right?

Yesterday I was looking on my TV’s guide channel, looking for something to watch when I saw a familiar event that made me smile: The X-Games. Of course, I had to tune in. If you’re unfamiliar, the X-Games is essentially the Olympics of what used to be called extreme sports. We’re talking skateboarding, BMX bike riding, motocross and formerly rollerblading. Seventeen years ago, I was 11 and somewhat obsessed with extreme sports. Airborne was–and still is–one of my favorite movies. I was always impressed with how people could do such amazing tricks on bikes, boards and blades. So, when I first heard about the X-Games, I was stoked to use the parlance of the day.

As taken as I was with the thrilling exploits, I never really tried them myself for one simple reason: my desire to not get physically hurt outweighs pretty much any other one in my head. I’m not a thrill seeker or much of a risk taker. I still kinda sorta tried to be extreme in my own way, though. I got a pair of rollerblades that had a space for rail grinds. I rarely left the ground, though I still have those skates. I also owned a BMX bike which I saved up for. I think it was a Diamondback. It was important for me to get one with a Gyro (a piece that allowed you to spin the body of the bike around the handle area without twisting up your brake lines) and also some pegs. I was a little more fearless when it came to the bike. I’d ride through the woods near my house and even hit a few jumps. I was also pretty adept at wheelies for prolonged periods of time, but without access to any really courses or whatever, my interest soon moved to driving a car and the bike has sat in my parents’ shed ever since (actually, they might have given it away to someone now that I think about it). I would actually consider picking the bike back up, but don’t really live in an area conducive to such things.

See, that was always one of the problems I had with the extreme sports. I wanted to experiment (or thought I did) but didn’t really have the freedom or the access to test myself. A lot of that might have been self imposed. I also was scared of the law. In high school I hung out with a dude who was really into skateboarding. He’d tell me all kinds of stories about going downtown and finding places to skate. It sounded amazing, but not something that I felt I could or really wanted to do.

Speaking of skating, it never seemed like an option for one simple reason: I can’t make the damn board go. I’ve got pretty good balance and all that, but I’ve just absolutely never been able to get my coordination down to stand on a skateboard and push myself forward. It’s ridiculous. I don’t get it.

I think my personal inability (and fear) is what really attracted me to the X-Games in the first place. Dudes flying through the air doing all these insane tricks and seemingly having a great time with it. That’s where it’s at. I have a lot of the same admiration watching it today, 17 years later (yes, that makes me feel OOOOOOLD). My older, possibly keener eye also notices just how amazing some of these tricks are. I’m watching the skateboarding vert ramp heats right now and am just amazed at the skill level involved (it was the same way with the street course yesterday). The ability to rocket yourself up and down a cert ramp while also rolling on a board while also keeping track of where you’re taking off and landing while also doing tricks that sometimes involve spinning the board with a flick of your toe and catching it with your hand while not breaking your neck is AMAZING. Even if you’re not into the sport, you’ve at least got to give it to these guys for being dedicated, putting their bodies on the line and recreating some seriously intricate tricks.

Because I’ve never done any of this stuff myself and I haven’t really read up on it since I was in high school–and that was mostly BMX stuff when figuring out which bike to get–I don’t really have much of a gauge for what’s impressive and what’s not. I’ve watched a few of these heats and every time I’m just like “Holy crap, he did that and didn’t die, give him a million points!” But that’s not really how it goes. That’s okay though, it’s fun to watch. Now, when are they bringing back the rollerblading competitions? Maybe I can dust the ol’ blades off…