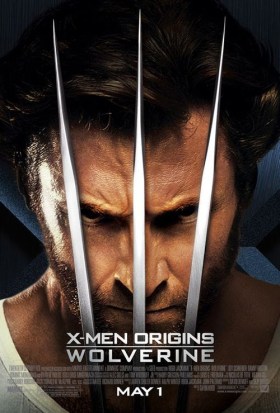 I was not excited about watching X-Men Origins: Wolverine. Like with many comic book movies that came out between 2005 and 2009, I was pretty burned out on them by the time they debuted thanks to working at Wizard. In the research department, we’d struggle to find headshots of actors that most people hadn’t heard of, usually for free or low cost. Not an easy task, especially when they wanted to run different ones each issue. The reason I wasn’t rushing out to see the flick is because I didn’t hear good things. People seemed to generally dislike the movie. After putting off X-Men 3 and not liking that flick, I figured my days of watching X-Men movies were over for a bit.

Then folks started liking First Class (which I still haven’t seen) and I’ve gotten over most of my image-finding issues by now, so I not only added the movie to our queue, but bumped it up to the top. The missus wanted to check it out, so it took a bit for both of us to find time to sit down and watch it, but once we did, I actually liked it.

I’ve got questions about how everything fits together. Is the girl who turns into diamonds in this movie supposed to be the same as Emma Frost in First Class? Why did they bother including Cyclops? Exactly how many powers did Gambit have? Who are all these characters Wolverine’s fighting alongside? But even with questions like that, I still had fun with the flick. There’s a good deal of action, fun use of powers and an intriguing enough story, though one that would be just as at home in a Jean Claude Van Damme movie as anything else. I especially liked the early scenes with Agent Zero and Deadpool, those were pretty well put together and made me wish the movie was just about those guys running around kicking ass.

Even with my limited X-Men knowledge, I still couldn’t turn off that part of my brain that wonders who’s who, how they fit in to the grander universe and how the movie version differs from the comic version. It’s annoying. I wish I could just flip a switch and not spend so much time trying to figure out which mutant Dominic Monaghan or what role John Wraith played in the comics. To be fair, my wife was wondering about these things as well, so it wasn’t like I was the only one. I had to keep telling her I had no idea what was going on, which I kind of enjoyed.

The movie might get overly dramatic at times, but that’s part of the Wolverine game. I did like how they wound up erasing his memory so that the first three movies would make a little bit more sense and I thought it was clever how they got around the problem of having Cyclops there and even what happened to Stryker at the end. I want to believe it fits in well with the established movies, but I haven’t seen them recently enough to really judge the continuity and like I said, I haven’t seen First Class, though I am excited to. X2 is still my favorite of the bunch and sits up there pretty high on the list of my all time favorite comic book movies. Wolverine doesn’t come close to it, but it’s a fun continuation of the world set up by Bryan Singer.

A lot of people have said that the video game version of X-Men Origins Wolverine is far better than the movie. I have no idea if that’s the case or not because I haven’t seen the flick, but I think it might have raised by expectations a little higher than they should have been. This is one that I waited on at Game Stop, waiting for it to get down to a pretty cheap price. I was jazzed when it finally got down there and I started playing it a while back. It didn’t disappoint as it kicked off and I learned the various controls and eared more and more special moves. Being Wolverine and tearing through dozens of jungle mutants or high tech mercenaries is a ridiculous amount of fun in the beginning, but it wears a little thin after a while. But, what wears thinner faster has to be the boss battles that take place in the jungle levels, most of which involve a giant monster of some kind trying to smash you and you waiting for just the right moment to lunge (a great function of the game) and attack the back of his head. It was alright the first time, but man, that shiz got old QUICK and it happens over and over and over again.

I can’t speak to the story behind the game, which I’m guessing follows the movie at least to some extent as I wound up fighting Blob, Gambit and Deadpool towards the end. As usual, I ignored most of the story aspects of the game and listened to podcasts while playing the game (I love multitasking my entertainment whenever possible), but it seemed really repetitive as it bounced from jungle to inside levels where you first fight soldiers and then robots. There are some geek moments like where you fight a Sentinel, but 75% of the game felt like it was all the same stuff on a loop. I did like one of the levels towards the end where you’re chasing Gambit around a building site and have to jump around and fight all the different bad guys from the previous levels who are also trying to kill each other.

So, I enjoyed the game for the most part, but I walked away with a somewhat negative feeling for two reasons. The first is a practical one, I couldn’t beat the damn thing. The last boss you have to beat is the weird version of Deadpool from the movie who can apparently teleport, snikt swords from his forearms and shoot lasers from his eyes. You’re stuck fighting him up on a big circular loop thing. Just when you’re about to kill him, according to his health meter, he ‘ports away and does a huge blast that takes the floor right out from under you. If you can’t jump away in time–which happens because the game glitches and slows down for some damn reason–you die and have to continue from the very beginning. It’s not just frustrating, but infuriating. I tried ten times and just freaking quit. I didn’t feel too bad about it because, hell, I got the last guy, that’s close to winning right?

My second problem with the game is a little more philosophical, I guess. In the game you’re freaking Wolverine, yet there are a lot of things that get in your way and inhibit you. You can’t interact with the environment as much as you probably should be able to. Your claws don’t do nearly the amount of damage they should. Your special moves don’t do nearly enough damage. I had a similar problem with Marvel Ultimate Alliance 2. I don’t want to start off as a schlubby version of a superhero, I want TO BE A FREAKING SUPERHERO! I’m cool with getting more used to the powers and learning how to do more things with them, but I should have the full extent of that character’s abilities, which means my indestructible claws that can cut through anything should let me cut through anything, even if it is a soldier with body armor. I know what you’re thinking, “But then you’d just coast through the levels.” Nay, I say! Send thirty bad guys after me all guns blazing and I’d still have to do my damnedest to stay alive while they’re attacking.

So, in the end, the game’s not bad, but it’s not really much of a Wolverine game. Heck, it doesn’t even have ninjas! But, I had enough fun playing it. I actually started playing the Red Faction game for 360 which is kind of funny because in THAT game you can destroy all kinds of stuff with a freaking sledgehammer. They could have changed a few things and dropped Wolverine into that game and I’d be having a blasty blast. Makes me wish I knew how to mod a game.