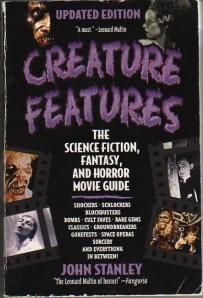 Since I’m cutting it close to the midnight marker tonight and I don’t think I’ll have time to get full reviews of either Student Bodies or the first season of Dexter, which I finished today, I’m gonna have to finally talk about about my old reliable book Creature Features. I’ve mentioned the book probably a dozen or so times on the blog, but haven’t really gotten into the nitty gritty details about it. After I had really gotten into horror movies, I was desperately looking for some kind list of what I should and shouldn’t watch. I printed out a few lists from various websites, but it wasn’t until 2000 when I came across the updated version of John Stanley’s Creature Features that I had my new bible.

The book was probably out of date well before I ever bought it, but who cares? As I mentioned when it came to rock and roll, it already felt like I was way behind on everything horror even by the time I started watching, so it was all catch-up time. Instead of becoming my guide to “should I or shouldn’t I watch this?” Creature Features has become equal parts checklist (I put a dot or an X next to every entry, dots mean I’ve watched most of the movie and Xs mean I tried and just couldn’t get through it) and guide to my horror memory. It’s hard to keep track of all the horror movies I’ve seen, especially considering my crappy memory, so keeping Creature Features around with its myriad of pencil dots and Xs take the place of my dying brain cells.

Even though the book is almost 10 years old at this point and Stanley has stated on his website that he won’t be updating it, it’s still my horror bible. I check it and read the entry for every horror movie I watch and will even watch an older horror movie over a newer one if I know I can cross it off in my book. I’m just a little weird that way I guess. I’ve even taken to writing the names of horror movies I’ve seen that aren’t in the book on the front and now back covers for completest sake. I’m sure I’ve missed a ton, but I feel like I need to keep track somewhere (this blog is now the spot I guess).

I believe the book is still available on Amazon and in some bookstores and I highly recommend it even though, like I said, it’s missing the last 9 years of horror movies. It’s just good stuff.