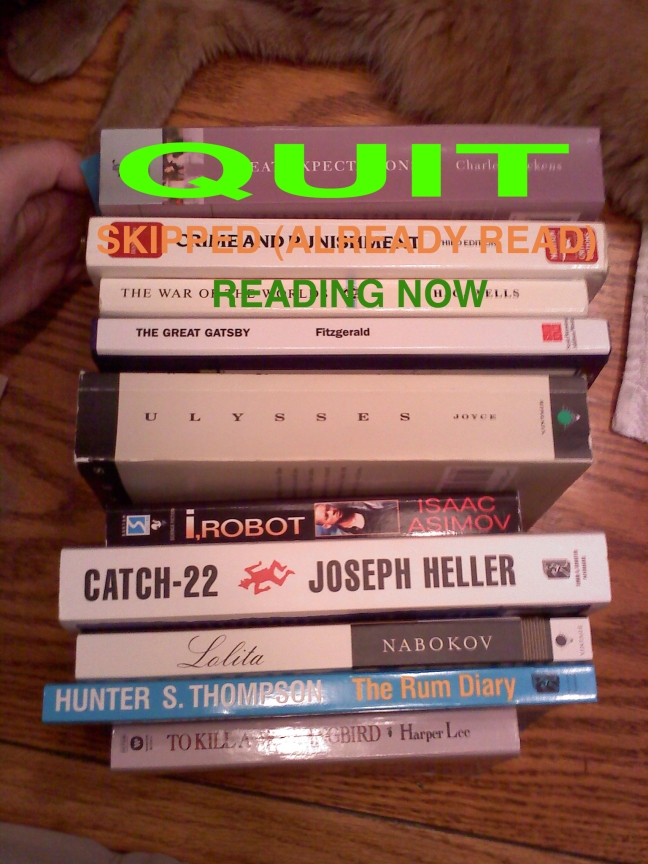 Just about 2 months ago to the day, I wrote a post about my Ambitious Summer Reading List consisting entirely of classic works of literature. I started off with Charles Dickens’ Great Expectations. Soon after I posted about how much I was enjoying the book and how I could relate to Pip wanting to become something bigger and better than what his life seemed destined for. I was practically gushing (and I hate that word, unless it’s referring to water).

So what the hell happened? Why have there been no more posts on the subject? Well, it’s because the book gets really boring and Pip becomes a total douche in the second part. As Pip’s leaving his home town he’s scared and excited and it’s just like going off to college, but then, once he’s living the life, he’s just an asshole who doesn’t want to be related to his family any more. It’s really hard pushing your way through Pip’s more pretentious remembrances to try and move on, especially when you don’t care anymore. Pip’s basically that guy who went away to college and came back on Christmas break thinking he was better and smarter than everyone else. He’s also probably wearing a scarf and one of those page boy hats even inside.

I tried over and over to get back into the book, but the straw that broke the camel’s back is reading an entire chapter about some guy he used to know performing in an opera. WHO GIVES A SHIT?! I’m not sure if this should fall on Dickens (was he getting paid by the word?) or Pip. I understand that opera is the kind of thing that Pip–being a douche–would think is very important to explain to his audience, but it’s not. It’s boring. Unless it comes back into play later on, I have no idea, because I quit. I’m a quitting quitter who quits. I didn’t want my lack of interest in this book to derail my entire summer reading project (which is looking to be a year-long ride), so I decided to put it aside and more on to something else.

Next on the pile was Crime And Punishment which I’ve read once and half-read a second time and is a very long and dense book. It’s one of my all time favorites, but I decided to hold off on rereading that one for now and jumped into H.G. Wells’ War Of The Worlds which I pruchased way back after my dad introduced me to the radio play. Being a Wellsian Victorian science-fiction piece, it’s really dense and my 10-year-old self didn’t get it and just didn’t care, so I moved on. I still have the bookmark from the now-closed Thackery’s which was an awesome independent book store in the same strip mall that Barry’s (my former bagel employers) was in. I started it last night and, yes, it’s dense, but I’m enjoying it. It’s a pretty short book, which is another reason I jumped to it. I figured that if I finished this one it would propell me into the next book, which is Ulysses, possibly the most daunting book of all time. I’m planning on doing a Book vs. Movie vs. Comic review that compares Wells’ book to the Steve Spielberg movie (which I haven’t seen) and the second League Of Extraordinary Gentlemen Volume in which our heroes fight this same Martian invasion. Stay tuned!