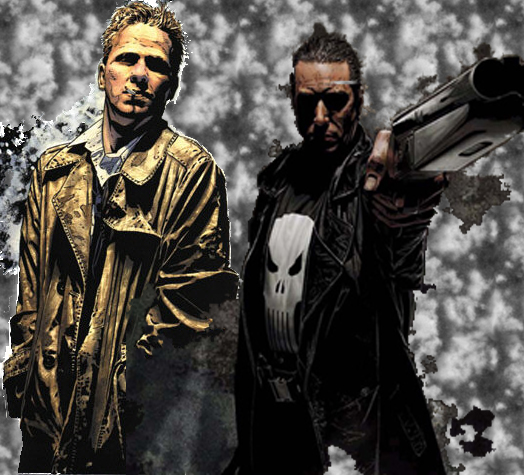 Originally, I was going to pair up John Constantine with Wolverine because they’re both characters with mysterious pasts who seem to constantly run into people they’ve had dealings with that readers have never been introduced to before. But, while looking for art by Tim Bradstreet of Wolverine, I saw all the Punisher artwork and the incredibly obvious smashed itself into my head: Constantine should team up with Punisher with art by Bradstreet or Steve Dillon and written by Garth Ennis (late 90s version if possible).

Here’s how I’d write the thing, in case anyone was curious. Punisher’s hunting down some mobsters in London and soon finds himself way in over his head because it turns out they’re mixed up with some magic. Luckily for him, Constantine’s been hunting this monster down and while he doesn’t stop the demon, he does scare it away in time to save Punisher’s life. From there, the pair team up to take on the monsters both human and otherworldly with lots and lots of bullets, blood and swearing along the way. I envision a scene between Frank and John where they’re exchanging their favorite curse words, possibly while fighting a monster. No, it’s not the most original story in the world, but it sure would be fun, wouldn’t it? A mix of great action and fantasy would be rad.

What I like about both characters is that neither of them could be considered good men, yet they do what can be considered good: removing evil from the earth. They’ve both done terrible, awful, horrible things, but they’ve done it with the supposed intent of helping their fellow men (the good ones at least). I think they’d pair well together once they saw that. Neither would be 100% comfortable because they’re dealing with the kinds of elements they don’t usually interact with.

If only Marvel and DC could stop their nonsense and get some fun crossovers going. I’m sure they’re a logistical nightmare, but I’m also pretty damn sure they would sell like crazy.