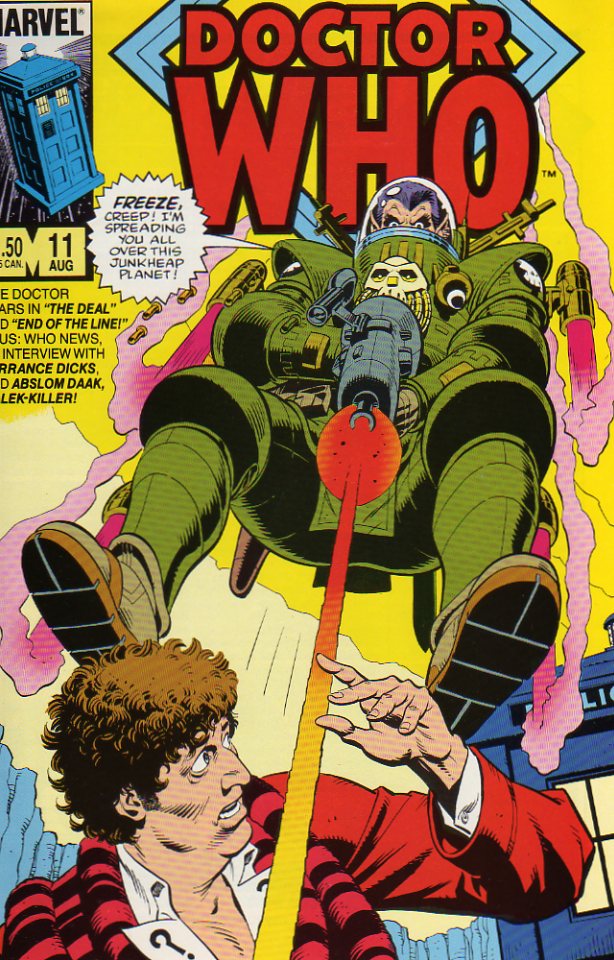 I was thrilled to discover a bunch of Marvel’s Doctor Who comics in The Box last time I went to the storage unit. There are probably 6 or 7 issue in total. It turns out that Dave Gibbons did a lot of the interiors which has been pretty cool to look at. I took most of the pile into another room to read through them and was surprised to see the cover to #11 lying on the floor next to my spot on the couch when I went back into the living room. “Hey, that guy looks familiar” I said to myself and then went for my treasured copy of DC Universe: The Stories Of Alan Moore and sure enough, this Doctor Who character–referred to only as Corp and Corporal–looks an awful lot like Bolphunga from Moore and Gibbons’ Green Lantern #188 back up classic “Mogo Doesn’t Socialize.”

Pretty cool, no? Now, I don’t mean this to be a “look at what this yahoo did!” kind of a thing. I just thought it was interesting and figured I’d share it with the world. Here’s the chronology as far as I can tell. To American audiences it might have seemed like Gibbons was borrowing from himself in a relatively short period of time as the GL issue dropped in May 1985 and the Doctor Who comic came out in August of that same year. But that’s not the case. See, Gibbons’ story was originally printed in Britain’s Doctor Who Magazine which came out in 1981. Still, as far as I can tell, Gibbons did draw the US cover pretty close to the time he drew “Mogo Doesn’t Socialize.”

Both characters enter their respective stories in somewhat similar spaceships and sport full body armor with skulls on the front chest area. They’re also both pretty big badasses, though Corporal probably more so because he doesn’t run away at the end of his story (instead he dies). They’ve also both got pinkish skin and like weapons though Bolphunga mostly wields his megaphone and sword instead of a gun like Corp.

Anyway, there you have it. Does anyone know if Gibbons has ever commented on this? I assume it’s been spotted by other folks, but I couldn’t find anything in a Google search.