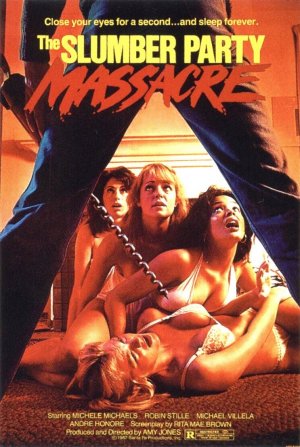 I haven’t been as excited about a lower level slasher box set like the Slumber Party Massacre Collection from Shout Factory since earlier this decade when I heard about the upcoming Sleepaway Camp set, which I bought so fast I got the blood Red Cross version before it got yanked for legal reasons.

It’s funny because at the local video store where I really cut my teeth on horror, the SLC movies were the shelf above the SPM flicks. With covers like you see to your left and a suggestive title, 16 and 17 year old me was all over the first two SPM movies after getting over the initial embarrassment of renting them. I watched the first two (can’t remember if Family Video had the third one at the time) and considered the second movie one of the worst I’d ever seen. As very long time readers might remember, I reviewed SPM 2 two years ago when talking about the then-most recent Manly Movie Night. So, this review will cover the first and third movies in these ultra-weird series as well as the commentary for the second flick. Let’s jump in.

I think watching the first movie again was the first time since that initial viewing, but I still remembered a lot of the bits: the cat scare, the scene in the gym, the creepy neighbor, the garment bag gag (freaking genius) and the killer’s Canadian tuxedo outfit. You can check out the NSFW trailer here.

The story follows a group of girls trying to have a sleepover which keeps getting interrupted by boys and an escaped maniac picking people off one by one with a drill (mostly). The movie gets a bad rap for being sexist or whatever, but it was written and directed by a woman, plus the young ladies in this movie fair far better than the boys. The movie’s also a lot of fun, well acted (none of these kids make me want to punch them in the face), suspenseful, funny and with its fair share of gory kills. Oh, I forgot to mention, the new girl in school lives next door to the party house and she spends a lot of time with her younger sister who seems like a tomboy at first, but turns out to be a Playgirl enjoying character with plenty of good lines. The sisterly relationship was fantastic.

Word has it that the movie was written as a satire but filmed straight which might explain a few scenes like why the girls are reading the newspaper during a sleepover and why one of them not only eats a slice of pizza that the dead pizza boy brought into the house (by falling forward) but also left the box on his chest. These bits really cracked me up as did the one with the girl in the fridge. My only real problem with the movie comes at the end when the Final Girl brandishes what looks like a safari sword that’s not just sharp, but sharp enough to cut through bone AND metal. But hey, whatever, after being pleasantly surprised at how much I enjoyed the movie (and not just for the T&A) a few question marks didn’t bother me too much. 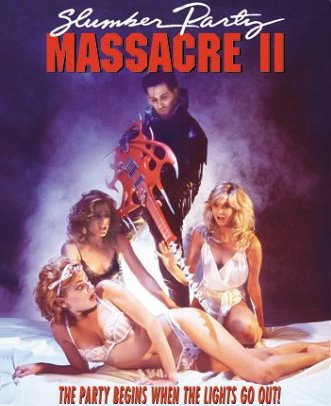 The second SPM might be one of the weirdest, out of nowhere sequels I’ve ever seen that actually has legit ties back to the original (Silent Night, Deadly Night 2 is pretty far up on that list too). See, the younger of the two neighbor girls is now a teenager who is played by the lovely Crystal Bernard as opposed to the girl in the first one who looked like Richie Cunningham’s sister Joanie. Anyway, she’s having some crazy dreams but doesn’t let that stop her from going on a vacation with her friends to a condo where their all girl rock band can practice. The dreams get worse and right after getting in bed with a guy, the new driller killer pops out of her head and starts killing people with that bitchin’ BC Rich drill guitar. The killer comes off as if Freddy Krueger just got back from the Rock and Roll Hall of Fame, speaking almost entirely in rock quotes, wearing leather and even doing a little dance number. It’s this level of ridiculousness that made me think this movie was one of the worst I’d ever seen. Mind you, I hadn’t seen a lot of movies back then, and definitely not Troll 2. The movie got lots of groans at Manly Movie Night, but I actually really enjoyed watching it while listening to the commentary (each movie in this set has a commentary by the way).

The commentary has the director, one of the slumber partiers and a few people who worked behind the scenes. There’s a lot of calling out where things were shot and talk of how they didn’t have permits to shoot a lot of things, but you also hear how some of the special effects worked and, most importantly, more of an explanation of the story. The filmmakers explained that the trauma that Bernard’s character suffered when she was younger were wreaking havoc on her psyche now, creating this weird character who didn’t want her hooking up with some guy. Once the sex stuff actually comes into the play, bam, it’s out there in reality. I’m not saying it’s this amazing piece of psychologically profound, but hearing where the creators were coming from was definitely interesting and shed new light on the proceedings, making me want to give it another view at some point in the future.

The third installment in the series left me pretty bored and annoyed though. First off, the group of characters this time around just don’t seem fun or interesting. They’re kind of vapid assholes with bad actors portraying them, which doesn’t help matters. The other problem is that, while the movie doesn’t have any direct connection to the first two that I noticed, it does borrow/steal a lot of the elements: the killer kills with a drill (though not all the time), a garment bag is utilized, there’s an unnecessary and awkward dance scene (both more awkward and unnecessary than the one in 2) and my least favorite horror trope, jerky cops who think the kids are lying. Hell, there’s even a closet scene that can’t help but be compared to the classic one in the original Halloween. Number one rule for horror movies: don’t steal the most iconic scenes in the best horror movies of all time.

Anyway, there’s an overly complicated origin story behind the killer who was seemingly molested by his cop uncle which drove him to meet up with the girl having the party and kill everyone inside. He starts screaming in a high pitched voice and being more annoying than scary. Just. Plain. Boring. In addition to being filled with slap-worthy characters, scenes from other movies and an awful killer, the plot is foreshadowed really heavy handedly. You’ve got one girl telling a guy about the swordfish in the basement. He gets REALLY excited and asks her to show it to him. I was immediately questioning why this dork was so excited about seeing a fish. Turns out it’s in the basement which lead to a kiss, but more “importantly” the girl explaining that there’s all kinds of scuba equipment in the house like a harpoon (GUESS WHAT COMES INTO PLAY LATER!!!). Ugh, it was so forced and awful.

Hmm, positive thoughts, positive thoughts? Oh, I didn’t see the killer’s identity coming, though it was pretty clear that it wasn’t the two “obvious” creeps (one of whom looks a lot like Kurt Cobain). I was also surprised to see so many girls make it to the last few minutes of the movie. Aside from that, though, the third SPM movie follows the strong tradition of 90s entries in franchises completely sucking. The only reason I’d watch this again was with some friends and beer or to watch it with the commentary on. Overall, the set is definitely worth it!