Today’s movies have the thinnest of connections: two of the lead actors are named Vincent. Aside from that and the fact that they might both be listed under the horror section is about it, but I wanted to watch the original Fly and then the newer ones within a limited time frame and this seemed like the best way to do it.

I decided to give Camp Fear a shot because I just did a post on Topless Robot about camps you don’t want to send your kids to, plus, it turned out that I had watched a portion of it, so it seemed like I was already ahead of the curve. Well, I didn’t remember anything from my first viewing of the movie (I’m guessing I was playing Netflix Roulette one night while a little tipsy) and restarted it. Man, this one is a stinker, though it starts off with what seems like some promise if you’re a fan of nubile young women walking around topless as we start off in a sorority house filled with unabashed young women waiting in line for the shower. From there it goes downhill. The setup for the movie is that a group of college women is going to the woods with their hot young professor and his girlfriend to look for fossils (he’s an anthropology professor). While there, they discover a monster in the woods who wants to kill them. Okay, cool, right? Nope. After the opening scene we’re forced to sit through the prof’s lecture. After that? The girls meet up with the prof and his girlfriend at a club where the band cancels and one of the girls gets up and sings a song she wrote with accompaniment from the juke box. Huh? The next day, they somehow all get into a car (one girl without her knowing) and find themselves at a gas station complete with old man owner, wino and a group of bikers who show up and take the form of the human villains in the movie.

Eventually the get to the camp site and everyone splits up, which makes the hot blonde girl an easy target for the monster running around (we’re supposed to think it’s this Native American dude we saw earlier). Turns out, the monster is actually a druid who somehow survived all these years in the woods. I think there’s also a lake monster of some kind? I’ll be honest, after 30 minutes of no horror and very little after that, I was pretty bored by this movie. I recommend completely avoiding it as it has no redeeming qualities. Everything about it looks fake and bad (except for the druid monster and the weird cavewoman clothes the blonde wears which looked surprisingly good). The supposed sorority house looks just like a regular house with way too many chicks living in it, the school a strip mall and there isn’t even a freaking camp in this thing! False advertising! I guess if you’re looking for some skin, watch the first 10 or so minutes and then move on to something that doesn’t waste all your time. 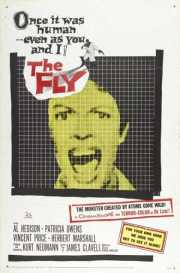 Something like the original version of The Fly. I went into this movie having seen the original on TV and remembering chunks of the plot but without being an expert. I also knew that Vincent Price was in it, which got me excited, but it turns out he doesn’t play much of a role in the film. Going in, I figured it would be about a scientist who develops some kind of technology that he tests on himself, gets mixed up with a fly and then moves on from there, but the interesting thing about this flick is that it starts at the end, with the scientist dead and his wife claiming to be the murderer. For the first 20 minutes or so it’s a bit of a mystery movie, with the audience trying to figure out 1) why this guy died under a massive press and 2) why his wife is freaking out about flies. Because I figured the plot would be linear, I assumed the transformation would be the result of Price’s actions (he plays the scientist’s brother), so I wasn’t looking for clues as to what was going on with the mystery. It took me a little longer than I’d like to admit to catch on to what was really happening: the scientist was actually part fly after the accident and the fly was part scientist flying around.

As it turns out, we’re shown exactly what went on thanks to an extended flashback with the wife explaining what happened to Price and another man. We see the scientist do his experiment and later wearing a bag over his head and accidentally revealing his creepy bug claw communicating with his wife.

Aside from trying to figure out how the elements I already knew would play out in this completely different film, I was also surprised at how good the scientist’s giant bug head looked once it was finally revealed. You always worry with these older films that the effects will look crummy, but I dug it. I also dug the psychological aspect of the movie when it comes to the wife. She explains exactly what happened, but people think she’s crazy, though Price gets convinced. See, there’s no proof because the press she used on the scientist was specifically used to crush his bug parts into non existence. Advised to find the fly, Price tries only to not hear the fly’s calls of “Help me, help meeeee.” Though Price doesn’t have a lot to do until the end of the film, he’s excellent as always. His enthusiasm for helping the wife is infectious.

I did have a few problems. Creepy as the final spiderweb scene is, it doesn’t look great nowadays, but I give them credit for trying to do what sounds like an impossible feat back then: putting a human looking head on a tiny fly body. The finish of that scene really takes away from the brief look at effects that don’t hold up so well. My bigger problem with the movie is the set-up of the story. I’m not quite sure what the point of doing things out of chronological order is aside from the ever so brief mystery element that winds up not really mattering. I’ll have a much better ability to compare the structure of this film to its latter day follow-up tomorrow, but I think I like the structure of the newer one better.

Anyway, overall, the original Fly was a lot of fun to watch. I can say without a doubt that these double feature Halloween Scenes have introduced me to some great older movies I might not have watched otherwise, so that’s always a plus. I am looking forward to taking a break come next month, though I do have a less ambitious plan for then that I’m keeping to myself for now.