Big ups to my boy Agent M for finding and linking to Dan McDaid‘s Dr. Doom vs. Doctor Who artwork. It’s glorious!

I have a longstanding love of Nerf and this N-Strike Stampede ECS-50 which I saw over on Entertainment Earth blew me away. It’s so wonderfully complicated!

Pop Candy‘s Whitney Matheson talked to the lovely Christina Hendricks at a party hosted by Johnny Walker. She drinks her whiskey on the rocks. Oh goodness. Can she get any better?

What a strange Amalgam mixing Luke Cage and Metamorpho, but I kind of love it. 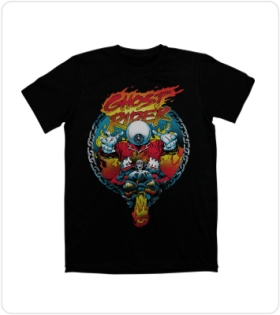 This Mighty Fine Ghost Rider T-shirt is giving me 80s/90s T-shirt flashbacks in a good way. 26 bucks for a shirt’s kinda crazy though. (via Shirtoid)