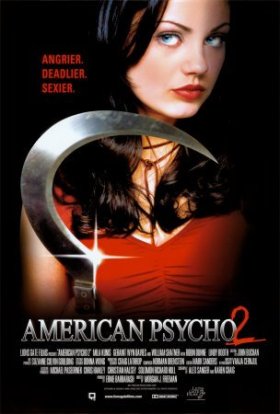 I thought about several different openings for this post. First, I wanted to say how I had failed in my quest to watch a horror movie every day of October because I didn’t watch anything yesterday. Then, I thought about opening with my thoughts on the original American Psycho. I liked the movie, but I didn’t become obsessed with it like so many others I know and have talked to. I also haven’t read the book, though I hope to eventually. Lastly, I thought about starting off with the most annoying plot hole/failure, but I think I’ll get to that.

The idea behind American Psycho II: All American Girl is that Mila Kunis’ babysitter was about to be killed by Patrick Bateman when the kid got free and murdered him. From there she wanted to be a killer killer, kind of like Cassie Hack from Hack/Slash. Cut to Mila in current times where she’s going to school and taking classes from William Shatner who has a coveted TA spot that seemingly leads directly to a place at FBI school. To get there, she winds up killing her fellow competitors and things seemingly go downhill from there. I think in this case, the connection to the original movie was cleverly done, probably did a lot more harm to the movie than just having it called something completely different and not mentioning Bateman. That movie’s fans are intense, so a straight-to-DVD sequel with the girl from That 70s Show and Captain Kirk probably wasn’t going to do a lot for them. Those two names were enough to get a horror geek like me interested, but the alienation factor was probably pretty huge.

One of the film’s problems is that Kunis’ voiceover and character are a bit much. Part of the original’s charm is that Christian Bale as Bateman was equal parts fascinating and charming in a weird way that you just had to see what he’d do next. Kunis has some of that, but she comes off as a little silly. She does a good job with the material, but it’s so super focused and cut and dry that it probably wouldn’t survive a lot of psychological scrutiny.

But, this is a horror movie right? Yes. Sort of. Kunis is definitely a killer, but the flick is pretty light on gore, which is another disappointment. I didn’t expect a splatterfest, but a little extra would have been nice. As it is, there’s a lot of kills happening off screen. Speaking of the kills, they’re related to the film’s biggest lapse in logic. Not the actual kills themselves, but the fact that no one on a college campus seems to notice that people are missing. Anyone who’s been to college knows that it’s like one big huge pulsing series of connections between people. Someone not showing up where they’re supposed to be raises questions and possibly suspicions among friends, classmates, hallmates and study buddies. This movie asks you to believe that someone hanged themselves and no one noticed for a couple days (also, apparently, that no one in this school has roommates, which is nonsense). Same goes for another person who got iced even earlier in the movie and didn’t seem to raise any suspicion.

At the end of the day, American Psycho 2 is a pretty goofy movie that winds up having a somewhat clever plan. But that makes it an interesting mystery, not really a great horror movie, even though she’s clearly off her rocker. There are interesting elements in there to be sure and maybe a few things I didn’t catch up on the first time around, but there’s also hundreds of better horror flicks out there to watch. Hopefully, I’ll be watching one of those soon!