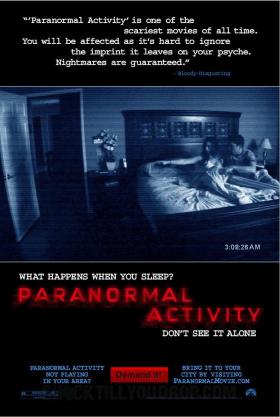 Sometimes you watch a movie that everyone was talking about a few years ago and don’t understand what all the hype was about. I didn’t have that feeling after watching Paranormal Activity for the first time today, but I do wish I had seen it sooner, mostly because I saw so much footage thanks to clips online (I didn’t seek them out, but there were a few on the Totally Rad Show, a podcast I watch) and trailers. Having seen so much, I went in with a pretty good idea of what I was going to get: a lot of “found footage” with increasingly creepy things happening to a pair of people who get increasingly worried. Bad stuff happens every now and then and then something most likely bad happens at the end.

And, for the most part, that’s pretty much how this movie and it’s sequel work. But, I do understand why it was such a hit. Aside from coming out of nowhere–much like Blair Witch, which I also haven’t seen and which also used the found footage idea–and early theater goers not knowing what to expect, I get how scary this movie could be in theaters. It’s dark, you’re not distracted by anything, you’re staring at the screen, searching for something creepy and then BAM, something creepy happens. Watching it on a bright day while also doing work isn’t the best way to view this movie, though it is how I did it.

I think watching the movie outside of the way it was intended to be seen definitely hindered the overall experience, but it also allowed me to analyze a few aspects I probably wouldn’t have otherwise. Not being so wrapped up in the scariness of the whole thing, I kept thinking to myself how much easier it was for them to pull of the bedroom effects thanks to the basically black-and-white nature of those scenes. I also noticed that many of the scares were pretty telegraphed. Without any traditional editing or score, you’re basically looking at a room and if there’s something out of place or moveable in that room, it’s probably going to move. There were times that those expectations were trumped, like in the Ouija board scene, but overall, it was a little obvious what was going to happen.

Except in the end, which I think I had spoiled for me somewhere along the line, though I can’t remember where, when or how. I SPOILER knew that one of theme was going to die and had it in my head it would be the guy. I honestly didn’t care by the end because Micah had been pretty dickish throughout most of the movie and that’s what happens to the guy who doesn’t believe in ghosts in the haunted house movie. Even so, I thought the movie was enjoyable and would be much better at night. I have my problems with haunted house, ghost and found footage movies (which I’ll get to at the end of this post), but I liked this one well enough. 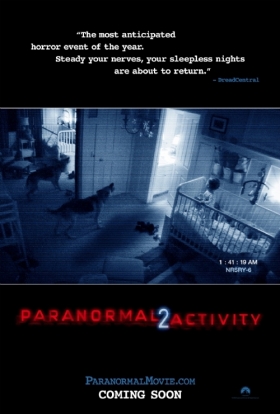 After the way Paranormal Activity ended, I was mostly just curious to see how the sequel carried on the story. When I saw that it was not only on Netflix Instant along with the original, but also only 98 minutes or so, I decided to give it a whirl. And you know what? It got to me more than the original. I know  lot of people thought this movie was unnecessary and I’m sure I’d be in the same boat had I been an early viewer of the first, but I wasn’t and this movie had something the other didn’t. Two things actually. A dog and a baby. Sure, maybe these were obvious additions and easy elements to include to immediately gain more of a sense of dread, but it worked on me. I think a big part of that has to do with the fact that we have our own baby now.

The story’s pretty much the same this time around. This one’s set shortly before the events of the first one and focuses on a family living in a house. The family consists of a mother, father, daughter, new baby and dog, so there’s more people to worry about as well. They get security cameras installed in every room, which explains the footage, but the daughter also has a fondness for filming her exploits, which fills in some of the security cam blank spots. The story is the same idea with a ghost or demon or some such causing increasing amounts of trouble with the victims learning more and more as they go and some bad things happening to them. We do get something of an explanation as to where this trouble started and the end even ties back into the first movie showing a few more details, which I liked, so all in all I thought it was a pretty good effort all around.

I did have similar problems as I did with the first one where I kept picking out the thing in the shot that would move or whathaveyou. This movie didn’t go in for that as much, so I spent a lot of time staring intently at the background while other stuff was happening in the frame. It also gets really, really repetitive at times, because the footage constantly cycles through the same shots, though it stops when something interesting is happening. This didn’t make for the most pleasant viewing experience. Even with all that, the ending is pretty darn intense.

As I mentioned above, I have problems with ghost, haunted house and found footage movies, most of which I’ve talked about in other posts on this blog. My thing with haunted house movies is that, if they don’t take place over a fairly short period of time, I don’t understand why people don’t just leave. This is explained in the first movie by Katie’s belief that the ghost will follow her and in the second by the father’s disbelief at what’s happening. Fair enough. On a deeper level, ghost movies get to me because there’s no logical way that humans would know how to handle disembodied spirits. I know there’s all these legends about ghosts and what not, but what would they really be based on? How do you know they work? How do you know that the one spell you’re trying is something useful? There’s just too many question marks there and no real way to know the rules. When it comes to found footage, I’ve said this before, but who exactly is supposed to be watching this stuff? If real people had taken real footage of all this and SPOILER really died, there’s no way it would be in a theater. You’ve also got to wonder who’s doing all the fast forwarding and cutting from minute to minute while in a conversation. The latter happened a lot in the second movie, which was kind of odd considering the lack of editing overall. Why not just show the whole conversation instead of skipping around? Is it supposed to put me off balance? It doesn’t, it makes me wonder why you’re cutting things, which takes me out of the story.

Even with those problems and per-conceived notions going in, I think these movies handled them well enough that I didn’t walk away feeling like I wasted my time. The viewing experience wasn’t bad by any means, but it also wasn’t as thrilling as it could have been. I like how the story of the second film kind of wraps around the first, though it’s a little odd that the sister from 2 isn’t really discussed in 1, even though they’re both having ghost problems (unless maybe I didn’t catch that part, which is entirely possible). A lot of times with prequels you run into this problem where it tries to explain way too much of what happens in the first. There was some of that in this movie, but it was more of a logical presentation instead of a “we have to show all these iconic elements, just earlier” that you get a lot of. I’m curious to see the 3rd installment eventually. Without spoiling anything, does anyone know if there’s a modern-day tag at all?