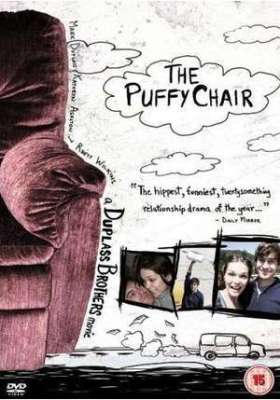 After watching and really enjoying Mark Duplass in The League, I did a little reading here and there online and decided to give some of the movies he’s made with his brother Jay a look. I’d heard of the Duplass Brothers and the movies that they made together, most of which have been added to the mumblecore sub sub subgenre of film which, as far as I can tell, describes inexpensively made films starring dudes in their 20s trying to deal with life as an adult.

And, as you might expect, that’s what The Puffy Chair is about. Mark plays Josh who’s been dating Emily (Katie Aselton, who is also on The League) for a while. He has plans to pick up a chair much like the one his dad used to have as a birthday gift, but a buddy cancels, so Emily goes with him. They also wind up picking up Josh’s hippy dippy brother Rhett who goes along on the trip. But, the movie’s not really about that, the trip and the chair are really just opportunities that lead the characters to question the status quo of their lives.

The heart of the story really revolves around Josh’s inability to grow up and become a mature guy. It’s the kind of thing that a lot of low budget movies like this deal with because it’s the kind of things people who would write and make movies tend to devote mountains of thought to. At one point while watching the movie I thought, “I’ve seen this movie before, why am I watching it again?” But then I realized that it’s more about the creator’s personal spin on that story that interests me. I can’t say that about every kind of movie (I’m not really into boxing or shark movies after seeing Rocky and Jaws), but this is a kind of film I can get behind.

There’s one moment that really spoke to me and is probably the most revealing scene in the film for the characters. Rhett has met a girl and they want to get married, so Josh performs an impromptu ceremony at the woman’s house that night. The vows he makes up are incredibly telling. One set of vows involves not judging the guy or asking him to change with the ones for the woman ask her not to freak out too much when things eventually fall apart. But, in my experience, life is all about changing and growing. Too many people think they’re perfect just the way they are and have no room for improvement, but we all do. There are plenty of things we all need to work on to help ourselves grow and develop over our lifetimes. It’s never too late. I’m not sure if that message is really relayed in the rest of the film–I’m leaning towards yes–but that was what I got out of that scene and the whole flick overall.

I’m definitely intrigued by the Duplass Brothers’ filmography now, most of which I believe is on Netflix Instant. I very much like the idea of a pair of guys just getting their shit together and making a movie. It’s not the most spectacular looking film of all time, but it exists. That’s more than I can say. This makes me want to write more!