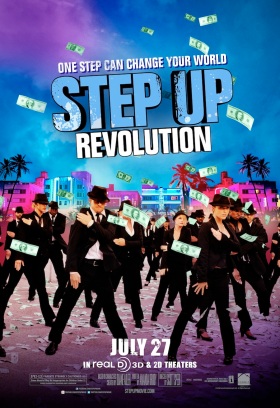 I love a good dance movie and as far as I’m concerned Step Up Revolution is a pretty great one. Don’t get me wrong, the story is all kinds of silly, boring and trope-filled, but the dancing in this movie is BONKERS. I actually considered doing a kind of dueling review thing where I wrote positively about the film in one font and negatively in another, but that sounded like a lot of work, so I’m just going to address the points as I go.

The plot of the movie revolves around a Miami dance crew called The Mob who plan elaborate flash mob dance routines which they also record in an attempt to win a contest on YouTube. At least at first. As the story progresses, a Big Mean Businessman wants to buy up their neighborhood and tear it down to build a hotel. As it also happens, the main guy from the dance crew has just fallen for BMB’s daughter WHO CAN ALSO DANCE AND JOINS THEIR CREW!!! If you’ve seen more than a dozen movies in your time, I bet you can pretty much figure out the plot of this movie. Main guy hides girl’s identity, but when his friends find out they get MAD. Basically, people in this movie are incredibly one-sided, flat and don’t do anything that normal, multifaceted people do.

There’s also all kinds of practical problems with the reality of the movie itself. How do they get such awesome costumes in such huge numbers? How do they record dance numbers that take place in several rooms at the same time? How do you get the timing down of an escalator dance number without access to one? Why does no one ever try to interfere with their performances?

But, those are all logic questions and who really cares, right? Dance movies are a lot like action movies in that you’re really just watching for one kind of scene and the rest is padding. In either case, as long as I get a killer dance movie/fight scene every 10 minutes or so, I’m a happy camper. I didn’t count or anything, but I’d say that SUR comes pretty close to that number. And these numbers are insanely awesome. I should mentioned I watched the movie on Blu-ray at home and it was a wonderful experience. The movie’s as ridiculous as it is gorgeous.

It kicks off with an epic one with The Mob stopping traffic on a Miami street and doing an extended number. There’s another where they’re all dressed in suits at a big office building and another smaller one in a fancy restaurant. I’m also pretty partial to the one at the art studio and, of course, the finale is insanity topped on insanity featuring some of the cast members from the previous Step Up installments like the ridiculously talented Adam Sevani from the first one. The only one that didn’t quite work for me was the one towards the end aimed at the BMB that went so over the edge you expected everyone participating to get arrested or shot.

Again, even though that particular scene didn’t make much sense, it was still quite visually pleasing. And that’s what this movie is all about: being a visual treat. I’d go so far as to say this movie is the reason we have Blu-ray, to show off spectacularly shot, colorful scenes with attractive people doing amazing things. But, it’s not like I’d tell everyone to go out and see Step Up Revolution. If you can’t stand these kinds of movies, stay away because it’s as much of “that kind of movie” as you can get. But, if you’re like me and get a kick out of such things, do yourself a favor and watch this one.