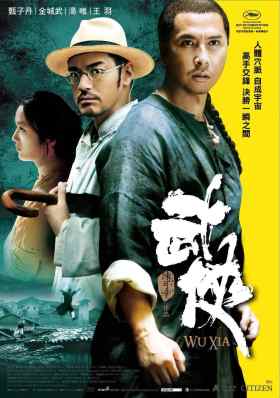 Left to my own devices, I probably wouldn’t have ever watched Dragon (Wu Xia in the native Chinese) and that would have been a shame. I tend not to like period piece martial arts films and I generally shy away from foreign films that only offer subtitled viewing experiences instead of dubbed ones (for reasons I wrote about here). So, how did I end up watching it? Well, I was sent a PR email asking if I’d be interested in checking out the recently release Bluray and figured I’d give it a shot because I’m familiar with star Donnie Yen and love martial arts films.

I can’t tell you how glad I am that I did so. This movie was a revelation. It mixes so many different elements that it not only captivated me throughout but also kept me from doing just about anything else while it was on (a rare feat when it comes to my movie viewing habits these days). The movie felt like something that would result from a weird genetic experiment involving Darren Aronofsky, Brian De Palma, Ang Lee and David Lynch, but also something wholly unique to director Peter Chan.

The actual story revolves around a man named Liu Jin-xi (Yen) fighting off a pair of thugs who were trying to extort protection money from a butcher in a small Chinese village in 1917. In the skirmish, which looks innocent enough, Jin-xi accidentally kills one of the men. The attack brings in the regional police force including a unique inspector named Xu Bai-jiu (Takeshi Kaneshiro) who believes there’s something fishy about this story, that a common man would not know the very specific places on an enemy’s body to hit in order to subdue and kill them. Basically, he thinks he’s dealing with a person with a much different past than he’s letting on, which proves to be the case.

So, not only do you have some fantastic action scenes, but there’s also a solid dramatic mystery going on as well and those two elements combine to form a fantastically original movie. For his part, Bai-jiu not only has forensic skills on his side, but also knows the ways of chi, how it can flow and how it can be manipulated, a talent he puts to use on himself and when looking at others. There are some fantastic scenes where he’s explaining what he thinks happened in the opening fight scene where he’s actually standing there watching even though he wasn’t actually present, it’s like something out of that show Cold Case or how Willem Dafoe sees things in Boondock Saints, but instead of taking place during a simple moment, this is during a wildly complicated and slick fight scene. Here’s a clip:

The movie initially won me over by way of a very simple, very normal conversation between Yen’s character, his wife and their children in the opening of the movie. This just felt like such a real and genuine moment without all the pomp you tend to see in these kinds of things and just got into real family life. Not long after that you get a hilariously awkward fight scene that proves to be much more as the movie rolls on. These unique and different aspects — not the kinds of things you expect from a Hong Kong action flick — got me in. From there I was seated in, buckled and ready to go on a ride that goes from that to wild police investigation, then swerves into an identity mystery before hitting some recurring horror elements, existential craziness (real Lynchian stuff) and back to some killer fight scenes before a final conflict that had me flinching, worried and nervous throughout the entire thing.

Basically, Dragon sucked me in by showing me a family man trying to do what’s right, revealing that he might not be as simple a character as I originally suspected, pitting him against several foes, having him deal with that past and eventually face off against his own father for the protection of his family. I can get behind that and I highly recommend you guys do the same.