It’s been a crazy-long time since I’ve talked about TV here on UM, but that doesn’t mean we’re not watching. It’s an interesting season because there are a good deal of shows I’m really into, but also a lot of slots in the schedule that are left open. For what it’s worth, we’re still in the dark ages when it comes to cable and don’t have DVR, so all of our viewings are done the old fashion way, “live.”

I wasn’t sure what to think about the entire last season of How I Met Your Mother all taking place over the weekend of Barney and Robin’s wedding and yet it’s been pretty great so far. This really feels like a well constructed series finale that not only tells its own story, but also wraps up dangling plot threads and brings old characters back in for a sendoff. I also liked how they were able to fit in a “scary” Halloween episode within their format, which they could have easily skipped right over. Well done! For what it’s worth, I’m excited about How I Met Your Dad, the upcoming spinoff that’s not really a spinoff. HIMYM is such a well constructed, well acted show that I’ve got faith in them to do the same again.

2 Broke Girls is the kind of show that I don’t mind missing every now and then, but keep coming back to it. My wife doesn’t like how over-the-top the characters get, but I go back and forth between thinking it’s trying too hard and laughing my fool head off. This season, they’re doing a lot of interesting things with the season’s arc. They added the store in the back of the diner and a new waiter character and just recently enrolled both Max and Caroline at the pastry school, so we’ll see how that goes.

My wife got me into Sleepy Hollow, but I’ve missed so many key episodes that I’m not really sure what’s going on. I’ve seen it’s very popular, so I’m hoping that when the full season is over, it’ll get up on Netflix pretty quickly so I can catch up. The combination of quality creators, a fun cast and an interesting premise are adding up to something I think I’ll like. The only question mark in the mix here is whether Fox will unceremoniously cancel it or not. I’m still feeling burned by Alcatraz, you guys.

If my wife is in the other room or Sleepy Hollow isn’t on for whatever reason, I’ll click on over to Discovery and watch my favorite mechanics work on some cool old cars on Fast N’ Loud. I’ve actually stopped watching a lot of reality shows I used to be into, but this one still fits into the sub category of “people who are good at their jobs, doing their jobs well,” which I enjoy.  This season feels a bit more TV-y with the addition of Richard’s restaurant, but what are you gonna do? 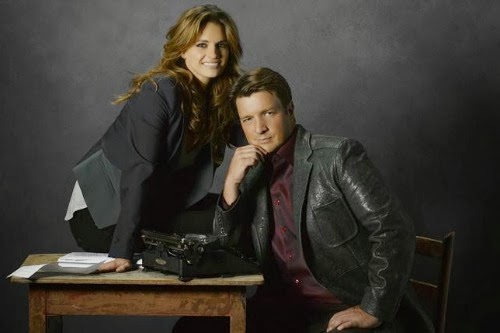 My wife is the Castle fan in our house. I don’t dislike the show, but I also don’t get excited about new episodes and will often just read right through the episode. I was pretty disappointed with the beginning of the season where Kate was working for the FBI. It could have been a cool new direction for the show, but I never once felt like they were really trying to sell that idea and kept waiting for something to happen to get her back to NYC. It didn’t take long and we’re back there now. There is an interesting overarching plot going on right now that’s interesting, but I’m still not super absorbed.

Guys, I really wanted to like S.H.I.E.L.D., but it just wound up being way too boring and rote for me. I watched the first four episodes or so and every single one of them felt like a spy movie I’d already seen. I was mostly disappointed that the episodes I did watch had almost no actual comic book references. I’ll talk about Arrow in a future post, but I love how they work those things in without getting too inside baseball.

One of the big reasons we stopped watching S.H.I.E.L.D. is because we liked Fox’s comedy line-up at the same time consisting of Dads and Brooklyn Nine-Nine. The cast of Dads got me excited about this show right away. You have Seth Green who I’ve been a fan of since Airborne, Giovanni Ribisi who I’ve dug since Suburbia, Martin Mull who was on Roseanne and Peter Riegert from Animal House. I love all those things and all those people, but I don’t know if I love the show. It’s kind of the nerdy, dude-based 2 Broke Girls, which is fun, but not necessarily transcendent. Still, I’ve enjoyed every episode I’ve seen. I do have two complaints. First, why don’t we ever see Ribisi and Vanessa Lachey’s kids? Two, the weight of a comic book longbox was not accurately conveyed on last night’s episode. Come on guys!

When I first heard that SNL favorite Andy Samberg was moving on to a cop show, I was intrigued. He’s definitely one of the more absurd comedy guys in the mainstream, so I kind of expected that from the series, but was surprised and impressed with the fact that Brooklyn Nine-Nine is a far more downplayed, reality-based show than I expected and it definitely benefits from that. I was also surprised that he’s really a great cop. I appreciate that they went a bit against type, but still have really great over the top characters played by Terry Crews, Joe Lo Truglio and Stephanie Beatriz and Joel McKinnon Miller. Meanwhile, you’ve also got the wonderful Andre Braugher who helps keep things grounded. It’s a great mix that works well and sets up some great comedy. I think this might be my favorite new show of the season.

We’re still big fans of both New Girl and The Mindy Project. I just love these characters and have such a great time hanging out with them every week. It seemed like both shows kind of wrote themselves into corners early on with New Girl having Schmidt declare war on Nick and Jess and Mindy getting engaged. I’m still not sure how well those things were handled but I am glad that they seem to have been dealt with. I do know that I like seeing Happy Endings alums on both shows with Damon Wayans Jr. on Girl and Adam Pally on Mindy.