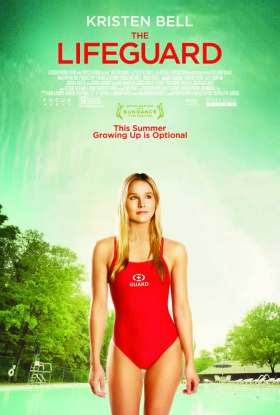 I’d like to tell you that I wasn’t drawn to The Lifeguard because of the obvious reason: the shot of star Kristen Bell sporting a Baywatch-esque red bathing suit on the cover/poster. But, to be honest it was. Not so much because of the image’s intended sex appeal, but because it featured an actress I’m fairly familiar with doing what seemed like an indie movie. That tends to imply a more serious or personal story because why else would a somewhat big deal actress get involved?

As it turns out the movie, written and directed by Liz W. Garcia, stars Bell as Leigh, a 29 year old working as a reporter in New York City who gets fed up with her gig and heads back home to a small, yet beautiful town in Connecticut. While there she moves back in with her parents, reunites with her high school pals Todd (Martin Starr) and Mel (Mamie Gummer), takes a job as a condo lifeguard and meets some high school skaters who want nothing more to do with school.

At this point it seemed like somewhat standard 30-something drama. It’s the kind of thing any of us who follow our passions think about: is it better back home? In Leigh’s case, she figured the answer was yes and went back, but things get way more complicated than you might have thought after she starts hooking up with one of the high school guys, Little Jason (David Lambert). It’s a crazy, passionate, dangerous, morally complicated relationship that seems to be the exact right thing for both of them at that moment.

But, nothing that glitters is gold, of course and things don’t stay so sunny. Things happens between friends, people lie about what’s going on and desperation takes over for more than one character. It’s the kind of film that has a few moments that seem like they have to happen and others that genuinely surprised me, but you knew from the beginning that these two people couldn’t stay together.

I really enjoyed this movie, as much as something so sad can be enjoyed, but like I said, I think that Leigh and Little Jason gave each other what they needed when they needed it even if it wasn’t the most legal thing in the world. Both Bell and Lambert give incredibly strong, powerful performances and they have a kind of animal magnetism that makes them an obvious couple. In fact, I thought everyone in this movie really brought their A games and delivered killer performances.

The more I watch movies and think about stories, the more I realize that I enjoy ones that focus on relationships that society might deem inappropriate. I don’t necessarily mean sexual relationships, but combinations that might seem odd to outsiders. Even if Leigh and Little Jason weren’t hooking up, their groups hanging out with one another, drinking and smoking weed in the forrest would be considered wrong or weird by many people. I like seeing those kinds of relationships on film. There’s actually a bit more of that in the next movie as well! 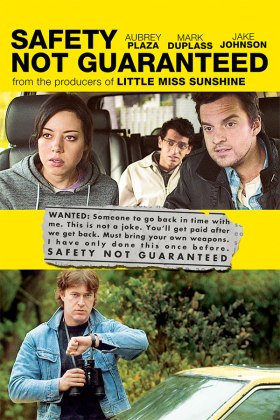 I’ve been hearing bits and pieces about Colin Trevorrow’s Safety Not Guaranteed. It’s about a guy named Kenneth (Mark Duplass) who places an add in the paper asking for someone to go back in time with him. Jeff (Jake Johnson), a reporter for a nearby magazine pitches the idea for a story and his editor sends him off with a pair of interns, Darius (Aubrey Plaza) and Arnau (Karan Soni). Darius winds up talking to Kenneth and getting drawn into his wildly intense plan to go back in time to see an old girlfriend.

Things get intense for all the characters as the film progresses. Turns out Jeff just wanted to do this story because it’s close to an old flame of his he wants to rekindle things with. Meanwhile, Darius gets really involved with Kenneth to the point where she helps him steal for the mission. Finally, Arnau, the shy bookworm type, has some new life experiences with Jeff after Jeff’s plan doesn’t quite go the way he wanted.

The big question that courses through the entire film is whether Kenneth is a mad genius or just crazy. Darius runs the gamut, going from skeptic to believer and then confused after talking to some agents who really are following him. Even so, up to the very end, it still feels like there might be the possibility of time travel and that makes for a really intense, complicated story.

The Derek Connolly script laid some awesome groundwork while Trevorrow’s directing added greatness to the proceedings, but the performances by everyone involved — including a small part by Kristen Bell as it turns out — were just fantastic. Plaza and Duplass both play against the roles you know from Parks & Rec and The League respectively, both coming off as very complicated, emotional and ultimately likable characters trying to change their lives albeit in a way that doesn’t seem to make much sense as far as science goes. I love Johnson on New Girl and while Jeff shares a few traits with Nick, this part is also a departure for him. Even though all three leads get to explore more emotional depths than their TV characters, they also feel familiar in a way that pleased me as a fan of those originals hows.

There were a few interesting similarities between these two films. Tone-wise, they’re both pretty serious with funny moments throughout. They’re about people trying to figure out what they’re doing with their lives. Like I talked about with The Lifeguard, this movie also features two characters you wouldn’t normally find hanging out together. Finally, they  both take place in pretty gorgeous locales which makes for some awesome scenery to pan across. All of those elements reminded me of another recent indie favorite, True Adolescents which I’d love to watch again, but isn’t on Netflix Instant anymore.