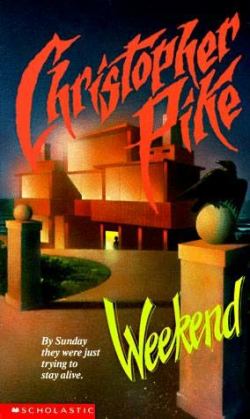 Over the past few months I’ve been doing a lot of thinking about my real entrance into horror. For years I said it came around the age of 14 or 15 and our Family Video membership, but that was when I got into horror movies. Years before that I found myself seduced by the mind-numbingly spooky drawings and tales in Scary Stories To Tell In The Dark which eventually lead to novels by the likes of Christopher Pike and R.L. Stine. I don’t remember exactly how that transition was made or who facilitated it, but I do distinctly remember talking to my friend John’s older sister Sharon about Pike books.

Curious to see how some of those formative books held up, I figured out a way to get paid to read the Scary Stories books (link to come when it goes live), but also wanted to dive back in to the world of Pike’s books, starting with Weekend from 1986 (I had no idea it was that “old” when I read it probably 10 years later). My memories from early adolescence are far from clear, but it seems like this might have been one of my early entrants into his oeuvre.

From what I remember, Weekend is a pretty representative offering from the author. There’s a deadly mystery revolving around a bunch of high school students with hints at supernatural elements in the works and nods to other horror genres with an ultimately happy ending. In this case, a group of friends heads to the Mexican mansion of two adoptive sisters Robin and Lena. They expect to be joined by their fellow classmates for a big party later in the weekend, but no one else shows up, which is just as well because they’re plagued by snakes, explosions, weird ravens, snakes and at least one traitor in their midst. Why would anyone go to all that trouble for this particular group of kids? Well, someone made Robin drink poison at a party and someone else wants to figure out who!

Much to my surprise I actually remembered the big twist at the end of this book, but I kind of think it would have been obvious to me even if I hadn’t. It’s not that it’s dumb or obvious, just that you go into a young adult book like this with a certain set of expectations and those get met pretty consistently. 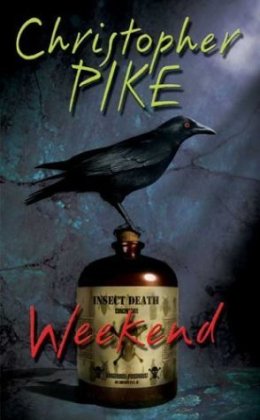 Still, I enjoyed taking this little trip back in time, though I didn’t find it that dated. The relationships feel true and honest and if you changed a few pop culture references and added in a line about them not getting any cell phone reception, this could easily translate into a modern young adult thriller. Or, better yet, a kind of anthology series based on Pike’s books on a channel like The CW or MTV.

I was also surprised to discover that this was Pike’s second novel after Slumber Party which I also remember reading. Sure there’s plenty of teen melodrama and an extended metaphor that can come off as a little clunky, but this is a strong second effort for an author working in this particular genre.

While these early books remained more grounded in reality, he eventually dove headfirst into supernatural elements and even sci-fi later on down the line, all of which I ate up with a spoon. Actually, I enjoyed going back and checking out this scary story from my past that I’m seriously thinking of turning the whole idea into a podcast where a guest and I read or watch something that spooked one of us when we were kids and revisiting them now. I’m short on time these days, but hope to get the ball rolling on that pretty soon!