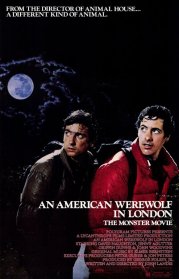 As I mentioned on Twitter last week, I’m embarrassed to say I’ve never seen John Landis’ An American Werewolf In London before. I mean, it’s considered one of the best werewolf AND horror comedies around which immediately makes it a must-see movie, even if I’m not a big fan of that particular monster. But it gets worse because I not only saw the Paris-set sequel from the 90s, but also own the soundtrack. As if that wasn’t bad enough, I actually interviewed Landis in person at one of the first New York Comic Cons (more on that in a future post this month).

I’m currently working on a list of the best classic horror films to stream on Netflix and Amazon Prime for CBR and spoiler, AWIL made the list, so I figured I’d finally watch the whole movie before turning the thing in.

The worry with finally getting around to watching a beloved film is that you might have already experienced all the good parts between talking to other horror fans, listening to podcasts and watching those “best scare scenes ever” type things that Bravo used to do. Well, I’m happy to say that, aside from the actual transformation scene and the parts with dead Jack hanging around, most of the film was a complete and delightful surprise (which shouldn’t have been much of a surprise given Landis’ other films like Blues Brothers, Animal House and the like).

You probably already saw this classic, but if not, it starts with American pals David (David Naughton) and Jack (Griffin Dunne) wander the British countryside. While walking, the come across a pub called The Slaughtered Lamb. Made to feel less than welcome, they head out, fail to heed advice about staying on the road and both get attacked by a werewolf before the townsfolk show up in time to blast the beast. It’s too late for Jack, but David heals in a London hospital where he meets Nurse Alex Price (Jenny Agutter). She takes him home after he’s discharged and they start a romantic relationship.

Were this a romantic comedy, that’s where it would end, but the whole time David spends healing in the hospital, he has horrible dreams about running through the world, Nazi monsters attacking his family and his increasingly dead pal Jack appearing only to tell him to kill himself because he’s a werewolf now. That goes out the window when he realizes all the crazy talk was legit, but he can’t even get arrested after confessing to a bobby that he killed people.

What struck me about the film is not just how funny it is, but how much I liked these characters. David and Jack feel like people I’ve known all my life. Heck, even after Jack dies and starts appearing in various states of decay, he’s one of the more interesting characters in the film.

I also liked how little of the film I actually knew. I’d seen up to the hospital a time or two, but never the wild dreams and definitely not his later wolf attacks.  And even though I’ve seen the transformation scenes before, they look even more amazing in context. I was also pleasantly surprised to see a classic Landis scene with an obscene number of car crashes and accompanying violence.

There’s also a surprisingly hopeless and dark quality to the film. Every time Jack pops up, he’s telling David to kill himself. The general werewolf theme of “there’s a monster inside of me I can’t control” persists, but there’s also this idea that it doesn’t really matter because you have to die to stop the curse and the visions of the dead. This film gets into the whole “am I really a werewolf” thing that I don’t always like, but I enjoy David so much by that point, that it doesn’t bother me. By saving his transformation for the end of the film, it makes more sense to me and keeps me engaged because I get to like him up until then and feel bad after he figures out what really needs to happen to him. Even assuming the ending was coming, it was still a surprise which is not something I can say about other nearly 20 year old horror films that everyone loves.