It sure is a great time to be a fan of 80s and 90s pop culture. Not only did we get to enjoy all that great stuff as kids, but we’re also seeing fellow fans create works based around many of the artifacts of our youths. The film Beyond The Gates, written by Jackson Stewart and Steve Scarlata with the former directing, fits very much into that category and I had a great time watching it on Netflix.

I first heard about this movie on the Shock Waves podcast and got pretty excited because it’s a film that revolves around a haunted VHS board game. Now, I never played these things as a kid, but I knew of them and was instantly curious about an idea that sounds like it should have been made back when those games were popular! I assumed it would be set in the 80s or 90s, but that wasn’t actually the case.

Instead, after seeing the Hardesty family open their video store in the 90s, we jump ahead to the current day as brothers Gordon (Graham Skipper) and John (Chase Williamson) meet at the video store to shut it down after their dad disappeared under mysterious circumstances.

John had stayed in town and hadn’t done much with his life, while Gordon moved away and got a job, a mortgage and a girlfriend named Margot (Brea Grant). As they boxed up the store, old, bad feelings came back and the guys got into it a few times, but both became super interested when Gordon found the key to the office, which their dad always kept locked.

In that room they found the tape for the VHS game Beyond The Gates in a player and wondered why their dad had been looking at it, so they took it back to his house and popped it in the player. By that time Margot had come to visit and they all got swept up in an intense version of the game — hosted by Barbara Crampton’s Evelyn — that lead to theft, accidental murder and a bizarre encounter in the basement.

For me this was a creepy story that was kind of tangentially nostalgic — the video store brought back more memories than the game itself — but it really hinged on the relationship between John and Gordon. Thanks to great performances by Williamson (who was also awesome in John Dies At The End) and Skipper, I came for the wannabe nostalgia, but stayed for their off kilter dynamic that felt super true and honest (again, tangentially because I don’t have siblings). 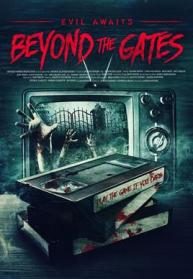 I also found myself very intrigued by the dad. They mention more than once that he had a tendency to go missing for months at a time, so this most recent disappearance might not have actually meant he was dead. Also, in the opening flashback, he’s got this worried look on his face like he knows that this place will be his downfall. He might not be on the screen all that long, but he’s definitely the driving force in this story and a clear one in his sons’ lives. I guess that’s the kind of idea that sits with me these days.