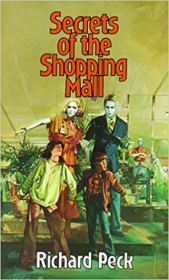 Several months back one new podcast I’ve been listening to — How Did This Get Played — lead me to another new one: Teen Creeps! Hosts Kelly Nugent and Lindsay Katai spotlight young adult scare fair from the 70s, 80s and 90severy week, often with a guest. This instantly perked my ears because I actually had a similar idea for a podcast a while back. In fact, I may have even dabbled with calling it Won’t Somebody PLEASE Think Of The Children which I eventually turned into a not-so-reoccurring feature here on the ol’ blog.

I read a few Goosebumps in my youth, but was far more drawn to R.L. Stine’s Fear Street books, but even more so to Christopher Pike’s offerings. I can’t say how many I read or how far I got into the genre, but it’s been a lot of fun listening to Katai and Nugent explore that territory on the podcast. At some point in the back catalog — I’ve been going through every episode from the first one — someone mentioned a book called Secrets Of The Shopping Mall by Richard Peck, noting that it was about kids in a mall at night and something creepy living in there too. I immediately requested a copy from the library and read it in about three sittings after Thanksgiving!

Boy, this book — published in 1979 — started off with a BANG. We’re introduced to Teresa, an 8th grader who lives and goes to school in a rough part of town. She lives with her aunt, who’s never around, and doesn’t have any friends because she went to so many schools before this one. With no friends, she just tries to keep her head down and make it through the day. Then she meets a kid named Barnie who skipped a grade in the middle of the year and became an instant target for the King Kobra gang at their school. One day, he gets shoved in a locker at the end of the day and Teresa sneaks back in to get him out and a friendship is born!

Not having much else to do, the pair wandered around, came across a crumbling abandoned building and had to hide out there to avoid both the Kobras and the nearby television cameras covering a group of protestors demanding the dilapidated building be torn down. Once the latter disperse, the former begin wandering around. Teresa and Barnie would have done their best to avoid them until the Kobra’s leader decided to do something mean to a cat. Barnie wouldn’t stand for that, took drastic measures and the pair then decided that they needed to get out of town. With very little money, they bought bus tickets and traveled to Paradise Park, a shopping mall!

Teresa and Barnie managed to find a place to hide and spend their first night in a huge department store in the mall. With the first night under their belts, they begin to plan out how they intend to make ends meet when they discover that there’s an entire group of teens living in the mall with their own society and rules, which they have apparently broken!

Crazier yet? There’s another group of feral kids who live in the parking lot — called Mouth-Breathers — who are in constant conflict with those inside because they want to live that life! Even though they’re put on trial and found guilty, Teresa and Barnie make their presence felt when the Mouth-Breathers launch an attack one night! Will that save their skin or cause even more trouble with their new roommates?! Read the book and find out!!!

Or read this paragraph which contains SPOILERS. I have to admit, I was confused by the other kids living in the store. I think that, when the book was mentioned on Teen Creeps, they mentioned that it might be about mannequins coming to life. And there is some of that at play here, but I think they’re also just kids wandering around the mall, looking nonchalant and sometimes posing like mannequins if the workers started looking too closely. Really, at the end of the day, I wish Peck would have more firmly established the deal with these kids and what they were. Of course, it’s also possible I’m just bringing too many of my own theories to the table. Maybe it’s as simple as they’re runaways, but I got wrapped up in my own theories. 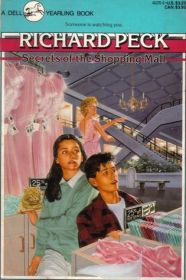 Even with that question mark, though, I found Secrets Of The Shopping Mall to be a compelling, quick read that captured a rough time for kids living in (I assume) New York City. It also managed to keep my jaw on the floor between Teresa and Barnie’s decisions and the other events beyond their control. It’s still surprising once they get to thee mall, but I thought the first third of this book was about as close to perfect as it could get. If you can find a copy, give this one a read!