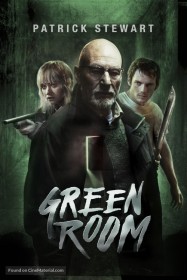 I’d gotten a copy of Jeremy Saulnier’s Green Room when it was released on Blu, but wound up not having a place to cover it. I also felt strange about it after the passing of Anton Yelchin, an actor whose work I’ve really grown to appreciate over the years. I also knew this was one of the more intense films of the year and wasn’t sure if I had it in me. Well, when I was alone, I felt like challenging myself and finally put it in. END_OF_DOCUMENT_TOKEN_TO_BE_REPLACED 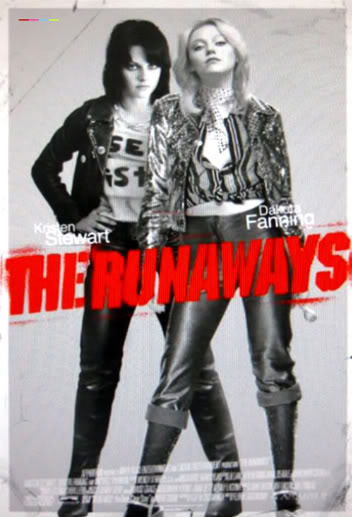 It’s nowhere near official, but according to my gut and this weird needle test the missus did at the Halloween party we attended, we’re having a girl. I’ll be honest, that’s a little terrifying, but that’s my problem, not that kid’s. Anyway, if nothing else, watching The Runaways made me want to make sure that my daughter can chase her dream and not have some asshole tell her that girls don’t play electric guitar.

So, The Runaways is kind of the story of the 70s all-girl rock band of the same name, but it’s really more about Joan Jett (Kristen Stewart) and Cherie Currie (Dakota Fanning) and their relationships with each other, booze and how that lead to the rise and fall of a rad band. The rest of the band doesn’t really have much of an impact on the movie, with the next most important person as far as the film’s concerned being manager/producer Kim Fowley who kind of brought the girls together and told them to think like dudes when playing (at least as far as the flick’s concerned, I’m sure it was a lot more complex in real life, but I’m not reviewing real life). You see Joan and Cherie living their respective crappy lives, eventually meeting up, taking the world by storm and then eventually breaking up thanks to drugs and, though it’s never said on screen, I would imagine the inability of such a young girl (Cherie was 15 when she started with the band) to process all the craziness that was going on in her life. Overall, it’s your basic biopic with rises and falls and all that. It’s a little boring in the middle, doesn’t always show important moments or even mention them (the girls head to Japan for a tour, but I don’t believe we’ve heard anything about them recording an album yet) and it is definitely weird watching Fanning strut around in her underwear. Aside from that, though, I think all the actors involved did a great job, though it’s a crime to hire Alia Shawkat if you’re basically going to have her play the same role Ethan Embry did in That Thing You Do. No more silent bass players!

I didn’t know a lot about The Runways or Joan Jett going into the movie, but I’d been excited about it for a while. I first heard the band on the Dazed and Confused soundtrack and read up on them from there. I was shocked to discover Joan Jett and Lita Ford had been in the same band together. Eventually, I picked up a used Runaways compilation CD at my beloved Boogie Records that is pretty great, but that’s really the extent of my knowledge of them. I’m gonna have to learn more about these and other lady rockers to make sure my potential daughter has some good role models to look up to (good in the sense of being badass chicks, not all the drugs and whatnot). 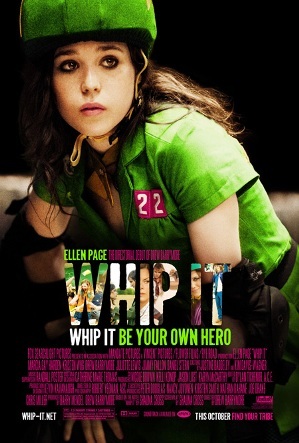 Whip It’s one of those movies that seemed pretty interesting when I first heard about it (Drew Barrymore directing a roller derby movie starring Ellen Page and Kristen Wiig? sold), didn’t see it in the theaters and then took forever to actually see because it seems to be one of those flicks everyone wants to watch from Netflix so it takes forever to get. A friend of ours was waiting for a long time too. We both had the movie on the top of our queues. Last week I stopped in at Blockbuster to take advantage of their five for $25 deal and picked up My Bloody Valentine 3D (without glasses, so I ordered them), Punisher Wars Zone, (500) Days Of Summer, National Treasure 2 and Whip It. Just because it would be easier to spend the four bucks and see the damn thing.

In the end it wasn’t really worth the wait. I mean, it’s an alright movie, that does have an uplifting message at the end, but it’s pretty damn formulaic. Our heroine, Ellen Page, lies about her age to try out for the Austin roller derby teams. She makes it, her friend helps her with her lies, she meets a boy, she’s really good at roller derby and, as you would expect, everything comes crashing down on her and it looks like she won’t be able to play in the big game because, you guessed it, the beauty pageant she’s supposed to be in is the same day! Ugh. I could have outlined the movie ahead of time and had a drink every time I was right. If that were the case, I don’t think I’d be able to type right now.

It’s by no means a bad movie even though the plot is very been-there-done-that if you’ve been watching movies for a while. Barrymore does a serviceable job directing though the movie could have used some better editing. In one sequence, for example, the girls (Page and Arrested Development’s Alia Shawkat) are at a party, they’re both flirting with boys, one throws up and the next thing you know they’re in a bed together in a room alone. Is it at one of their houses? Is it the house the party was in? What is happening?

From what I’ve seen in the rad documentary Hell On Wheels (which I could have sworn I wrote about on here, but must have instead explained it in great detail to someone, probably the missus) which is about the real deal Austin roller derby women who helped kick this trend back into gear, the action and the game seem pretty legit, though I’m sure there’s stuff in there that upsets the roller derby aficionados (like when us geeks watch the X-Men movies and yell at the screen for the little things).

So, no, it’s not the most original movie in the world, but I would recommend it to anyone interested in roller derby (after watching Hell On Wheels, it is on Netflix Instant last I checked), roller derby fans, people who haven’t seen too many teen movies and every teenage girl ever. Too long has this kind of movie been the territory of men (I love how proud the dad is that his girl can knock some bitches out, just as proud as the neighbor with the football kids). I’d make this mandatory viewing for girls and will show it to mine if I ever have any on Holovision or whatever the hell we’ll be watching movies on in THE FUTURE (gotta say it like an old timey cartoon or it just doesn’t work). Also, bonus points for the Star Wars names that got snuck in like Jabba The Slutt and Princess Slayah. Well played. 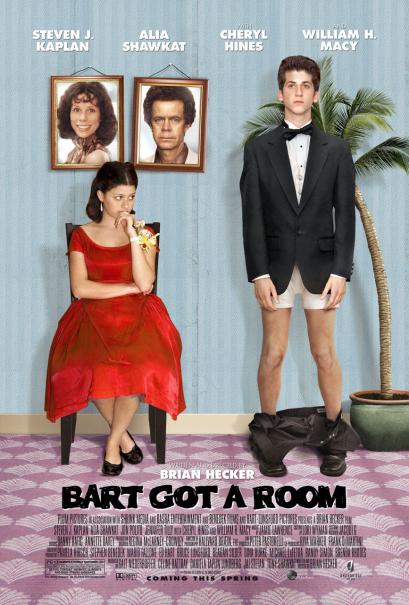 Bart Got A Room might not be a highly original movie, but I had a good time watching it. It’s about this kid Danny who’s kind of a geek trying to get a date for the prom. He’s got a crush on this hot sophomore he drives to school, plus his best friend since they were kids played by Alia Shawkat, asks him in a really nice letter. But, he wants it to be romantic, so he gets a room just in case, especially because this big goober kid, Bart, even got a room. Things go from bad to worse, Danny tries and fails with a series of girls and then, in the end, wants to surprise Shawkat by picking her up (she was going to go alone), but his buddy asked her because his girlfriend can’t go. It’s a big mess, even though his dad (William H. Macy) and mom (Cheryl Hines) try and help as best they can.

It’s not a teen classic by any means, but the performances are all stellar. The setting is interesting, I think it’s Florida. He’s surrounded by sun, palm trees, lizards, old people and cranes (both real and artistic representations) which makes it a lot more interesting visually. Plus, the end probably isn’t what you would have expected, though it reminded me of what happened to a friend of mine on his 21st birthday. I do have a problem with the logic behind the last quarter or so of the movie. Why wouldn’t he just tell Shawkat that he wanted to go with her? Also, why wouldn’t his friend have told him earlier that his girlfriend couldn’t go and that he asked Shawkat? Also, why would the dad leave a date with Jennifer Tilly who wants to have sex with him for any reason? That’s just crazy. I just read that writer/director Brian Hecker has co-written a movie about the founder of Atari, so that should be fun (hopefully).