I’d gotten a copy of Jeremy Saulnier’s Green Room when it was released on Blu, but wound up not having a place to cover it. I also felt strange about it after the passing of Anton Yelchin, an actor whose work I’ve really grown to appreciate over the years. I also knew this was one of the more intense films of the year and wasn’t sure if I had it in me. Well, when I was alone, I felt like challenging myself and finally put it in.

If you’re like me and put this film off, it’s about a hardcore band — Yelchin, Alia Shawcat, Callum Turner and Joe Cole — that finds themselves playing a neo Nazi club as a make-good for a previously botched gig. After their set, which actively poked the crowd, they were just about to get out of there when one of the characters went back for a phone charger and saw a dead body. The rest of the band soon finds itself locked in the green room along with the corpse, a huge bouncer and a few other folks including soon-to-be-ally Amber (Imogen Poots). From there, it’s a matter of survival as the club’s owner (Patrick Stewart) tries to clean up the incident through his right hand man Gabe (Macon Blair) and the bandmates continually try to get out.

Across the board, the performances in this film are stellar. You can practically smell the kids’ sweat as they try to figure out how to free themselves as well as their desperation and what it makes them do. I also think that the set designer/scout should get huge props. The title room is small and cramped and strange, but holds more than a few secrets. The club itself becomes a weapon, not just for our heroes, but also Stewart’s forces. Thanks to all of those claustrophobic elements, when the action moves outside, it’s almost too much to take in.

I’m so glad I finally sat down and watched this film. It’s as intense as intense gets, perfectly crafted and stunning at times, but also put me on edge to the point where I didn’t even think about looking at my phone. Riding that wave, I figured I’d move on to Saulnier’s previous film Blue Ruin. 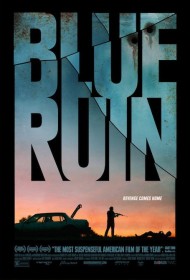 And boy, did it continue the mood and tone of Green Room. Blue Ruin follows Dwight (Macon Blair) as he decides to kill the man who murdered his parents and just got released from jail. It doesn’t end there, though, as this wannabe assassin accidentally drags his sister into the trouble and puts a target on himself for the dead man’s entire family.

I’ve seen a million revenge films, but never one quite like this. To my mind it captured the intense reality of what it would be like if a regular guy tried to take justice in his own hands, but without getting even close to the borders of a comedy. This is a serious movie with Dwight taking these things seriously and doing a surprisingly good job of keeping it together as he moves closer and closer to the second word in the title.

When I was in college, I took a class called Public Life and Private Lives with an amazing professor named James Biehl. We read Thomas Mann’s Death In Venice and discussed how, given the character’s actions and thoughts, he had to die. I started getting that vibe during this story. I won’t tell you if I was right or not, but given that he completely gave himself over to his vengeance, it seemed like a good guess.

I watched Saulnier’s first movie Murder Party about seven years ago (!) and I just keep being more and more impressed by the films he chooses to write and direct. His ability to capture and convey dread with glints of hope continues to impress and I can’t wait to see Hold The Dark, which debuts next year.