It’s vampire week here on UnitedMonkee! Let’s kick things off with one of their all-time biggest enemies, Buffy The Vampire Slayer! Like most of the internet, I loved the series (yes, even the first season). Even so, when Dark Horse first announced they were continuing the show’s adventures with Season 8, I was a bit skeptical, even though series creator Joss Whedon was acting as executive producer of the whole thing. See, back in the day, I bought a ton of Buffy comics from Dark Horse until I realized that they were just kind of filling in holes and playing with the mostly un-chronicled summers. Later on I picked up the Buffy Omnibus volumes and read in the intro that that was part of the whole deal because they didn’t want the comics to step on the toes of the show. As a reader, though, I got a bit bored reading about Season Three characters when Season Four was in full swing, but that’s old water under an old, far more crankier bridge.

The timing thing was obviously no longer an issue with the show being off the air. And, adding to the “good” column, Whedon would have an unlimited budget to work with and some of the best names in comics, TV and film like Brian K. Vaughan, Brad Meltzer, Georges Jeanty, Drew Goddard, Jane Espenson and Karl Moline.

Really, there was no chance I wasn’t going to start reading this book because I was working at Wizard at the time and free comics were everywhere. Like my fellow Buffy fans in the office, we got to reading and really enjoyed it. I might have been a little taken aback by the whole idea of this army of Slayers working around the world S.H.I.E.L.D.-style, but once I got used to it, I was all in. END_OF_DOCUMENT_TOKEN_TO_BE_REPLACED

CRIMINAL VOL. 3: THE DEAD AND THE DYING (Icon/Marvel)
Written by Ed Brubaker, drawn by Sean Phillips
Collects Criminal Vol. 2 #1-3
I’ve read Criminal here and there. I know there was a push at some point during the first volume to try and convince people to read the book in single issue form instead of waiting for the trade. I’m a big fan of the monthly comic book format, but I’ll be honest, I think most of Ed Brubaker’s comics work better in trade form, and usually reading several trades in a fairly short time period. You don’t have to do that with Criminal because it works in an arc system that doesn’t really crossover (maybe a few names here and there, I really can’t remember names from the first volume or if I even read the second volume).With that in mind, a Brubaker trade is usually something I really look forward to because it’s been so many months since I last read one. Unfortunately, this book was a pretty big disappointment. In the three issues, you see a heist from three different perspectives, the problem though is that, by the last issue I knew all the important parts of the story and didn’t really care about how crappy of a life the girl in the story had. I’ve read enough crime and mystery fiction to get where it was going from page one.

I will say that Phillips’ art is top notch as always. He really sets the mood and tone of the stories with details that go unnoticed at first. Plus, I liked the first issue, which followed a black boxer as he tried to set his life straight even though his former friend and current white gang leader started causing all kinds of trouble. Even that, though, felt familiar. Not like it was swiped from somewhere, but like I’d seen it or it’s parts elsewhere. If you haven’t seen or read a lot of crime or mystery movies, books or comics, I recommend checking this out. If that’s not the case, go check out the first volume of Criminal or, better yet, Brubaker and Phillips’ Sleeper for WildStorm. That’s one of the best mystery/crime/espionage/superhero comics of all time.

BUFFY THE VAMPIRE SLAYER VOL. 4: TIME OF YOUR LIFE (Dark Horse)
Written by Joss Whedon and Jeph Loeb, drawn by Karl Moline and Georges Jeanty
Collects Buffy #16-20
I’ve gone back and forth between not really caring about the Buffy comics and loving them. In the beginning, the whole story seemed a little off, but then the missus and I rewatched the whole series and I like where Whedon and Co. took the story with there being tons of slayers and Buffy being in control of all of them. And, for the most part, I’ve been pretty impressed with how well all the different writers have been at nailing that tricky Whedon-esque dialogue. Every time I pick up one of these comics, it can hear the actors and actresses’ voices easily tossing off the verbal calisthenics. My big problem has been the art. It’s not bad, but I’m often left scratching my head when a supposedly big reveal happens. “Who the hell is that?” I’ll often ask myself.

With this fourth volume of the Season 8 comics, that’s not too much of a problem as Buffy’s transported to the future where she teams up with and faces off against the future slayer Fray who starred in her own Dark Horse mini back in 2001. I will say that Whedon’s future dialogue is a bit too much at times, but all the other future stuff is pretty rad and the story fits well into current continuity while also wrapping up the Fray-verse. There’s also a big villain is interesting to see, but I think, with the end of the book, that won’t be a problem anymore. The trade also includes the one-off Jeph Loeb issue which finds current Buffy in the world of the animated series universe that never was. I actually ignored this issue the first time around because I don’t really care for Loeb’s writing generally and it seemed like a throwaway, but this time it was probably my favorite of the bunch because it put Buffy back in the early seasons of the show, but with her current thoughts, so it was kind of cool to see where she had come from and how much she’s made it through and changed (and not changed). It’s a funny little issue that’s definitely worth checking out. 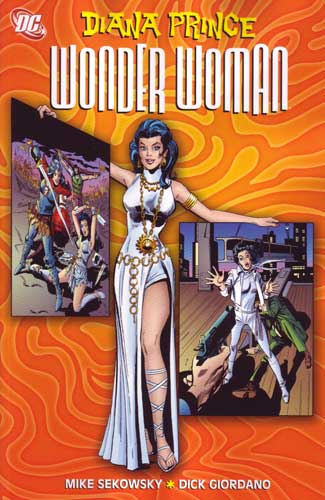 DIANA PRINCE WONDER WOMAN VOL. 3 (DC)
Written & drawn by Mike Sekowsky, with Denny O’Neil and Dick Dillin
Collects Wonder Woman Vol. I #190-198 and World’s Finest #204
I’ve talked about how much I love these early 70s depowered Wonder Woman volumes here and here and that continues on with this collection. I’m blown away every issue by Sekowsky who writes and draws all of the Wonder Woman issues in this issue (O’Neil and Dillin did the World’s Finest issue). These comics are filled with the elements that I love about Roger Corman movies: crazy fights, weirdly fantastic battles and mysterious houses filled with potential murderers. I think it’s awesome that DC let Wonder Woman get played with in such a way that basically made her the hero of a different kind of genre movie every single month. I would imagine all of this was because of lagging sales, but I don’t really care, I’m just glad they happened. I will say that #194 falls short as it’s basically a Prince and the Pauper/Dave riff with Diana turning out to look just like the princess of the country. She even takes the princesses  place when she gets captured. It’s pretty by the book and not all that interesting, but it’s but one stumbling block in an overall solid collection.

One interesting thing about this collection is that it actually leaves out a big chunk of #191 is missing. Right in the middle of an epic medieval-like war in an alternate dimension, Diana sits down to tell her new friend how she came to be de-powered, but you flip the page and it says “Later.” I thought that might be how the original comic was written until that issue ended after a total of only 5 story pages. I guess it’s kind of cool that they didn’t bother with a huge recap of something in the first volume of this series as I probably would have just grazed it anyone. On the other hand, I did have to go back to the original volume and give it a flip through as it’s been quite a while since I’ve read it.

In addition to the huge amounts of enjoyment I got from reading this story, it also pushed me towards digging into the history of comics a little more. I looked up Sekowsky on Wikipedia and found some really interesting stuff about him and a fellow creator. That got me thinking about a potential story set in the days of comics past. That got me reading Comic Book Artist #9, a TwoMorrow’s mag I ordered a while back and never got around to reading. The issue focuses on Charlton Comics which is freaking fascinating. It’s packed with history and interviews that have given me even MORE ideas. It also introduced me to how amazing Dick Giordano was as an editor from the accounts of his former Charlton co-workers. There’s a 31 page interview in the issue that I was saving for last. The next day Giordano passed away. Weird timing right? Of course, as I was finishing this Wonder Woman trade, I realized I had actually seen some of Giordano’s work as an inker and cover artist. It makes me wonder if he edited this book as well, considering it’s so interesting and eclectic and clearly focuses on the writer/artist’s strengths (a hallmark of Giordano’s editing style from what I’ve read). It makes me wish there was some kind of intro in these books. Hopefully someone’s working on a big book about Giordano like that Kirby book I want to pick up.