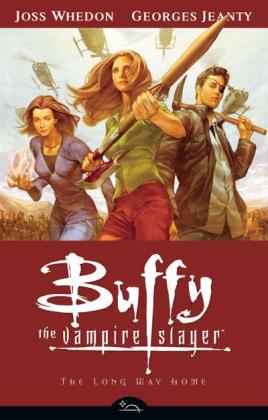 It’s vampire week here on UnitedMonkee! Let’s kick things off with one of their all-time biggest enemies, Buffy The Vampire Slayer! Like most of the internet, I loved the series (yes, even the first season). Even so, when Dark Horse first announced they were continuing the show’s adventures with Season 8, I was a bit skeptical, even though series creator Joss Whedon was acting as executive producer of the whole thing. See, back in the day, I bought a ton of Buffy comics from Dark Horse until I realized that they were just kind of filling in holes and playing with the mostly un-chronicled summers. Later on I picked up the Buffy Omnibus volumes and read in the intro that that was part of the whole deal because they didn’t want the comics to step on the toes of the show. As a reader, though, I got a bit bored reading about Season Three characters when Season Four was in full swing, but that’s old water under an old, far more crankier bridge.

The timing thing was obviously no longer an issue with the show being off the air. And, adding to the “good” column, Whedon would have an unlimited budget to work with and some of the best names in comics, TV and film like Brian K. Vaughan, Brad Meltzer, Georges Jeanty, Drew Goddard, Jane Espenson and Karl Moline.

Really, there was no chance I wasn’t going to start reading this book because I was working at Wizard at the time and free comics were everywhere. Like my fellow Buffy fans in the office, we got to reading and really enjoyed it. I might have been a little taken aback by the whole idea of this army of Slayers working around the world S.H.I.E.L.D.-style, but once I got used to it, I was all in.

And then I got laid off and was no longer in. Recently, I discovered that my library has a metric ton of Buffy trades in the system, so I figured it was time for a good, old fashioned re-read/read-through of the whole volume. I’ve got the first five trades and Fray in my own collection and the library easily supplied me with the other three. As it happens, these books inspired my focus on vampires this week along with my recent completion of Stephen King’s ‘Salem’s Lot.

I had a ridiculously good time reading these comics again and for the first time. I remembered a few of the beats here and there, but overall it was a really fun book that did feel like a Whedon-run season with an Avengers-sized budget. Between Dawn going through the Thricewise curses, the secret agent Slayers, the jaunts through time and space and the myriad of crazy enemies thrown at them, this was the perfect way to get this character into comics again.

All of that is great, but the comic also continued the wonderful and complicated and weird and dark relationships that were forged in the show. Buffy, Willow and Xander are still there center stage, but they’ve all been through and done so much that their relationships have grown and morphed and changed into these new things. With each character that comes back into the book, all of those emotional mountains continue building up and getting compounded to the point where some things (and people) will never be the same. They all also sound exactly how I remember them in my head (though having actual voices to mentally read the dialog helps). There were a couple times where the non-show writers might have gone a bit overboard with the BuffySpeak, but overall I thought the tone was super-consistent across the board.

While all that’s going on, you’ve got the growing mystery of who Twilight is and what his group means for Buffy and the Slayers. I don’t think I got up to that reveal the first time around, but heard who it was. The idea didn’t thrill me until I actually read the story and found out what the deal was. There’s a lot of metaphysical and supernatural explanation for what all that meant for reality and other realities and the Slayers and magic.

I will say this, and this gets into ending SUPER SPOILER TERRITORY for this paragraph, so consider yourself warned. As much as I enjoyed the high-flying, blockbuster theatrics of this series, I’m equally as excited to see how the more street-level focus of Season 9 plays out. This is the same way I feel about great television. Even when a whole lot of bonkers insanity goes on and characters die (I didn’t even realize Giles got aced right away, but once I did, it took me a while to be okay), but it was all handled so well that you can’t wait to see what happens next.

Okay, no more spoilers, I did have a few teeny tiny problems with the story. The first comes from the fact that we’re dealing with characters from a TV show that ended 15 years ago. My memory kind of stinks, so I’ve forgotten some healthy portions of the show which means that some of the reveals and the surprises went over my head. Eventually, the writers did a good job of catching me up, but there were a few times I knew I was supposed to be shocked by a reveal and it just didn’t happen. When the skinless dude showed up early on I was like…”Who is that again?” And the actual name wasn’t dropped until later, so it was a bit of a head-scratcher. Sometimes the writers seemed to rely too much on the art for those moments as well. This isn’t an insult to any Jeanty or Moline or anyone else who worked on the book, but my brain doesn’t always process real faces into art very well, so even some of the surprises with faces flew over my head for a bit. A simple text or dialog box would have been a nice crutch for some of us. 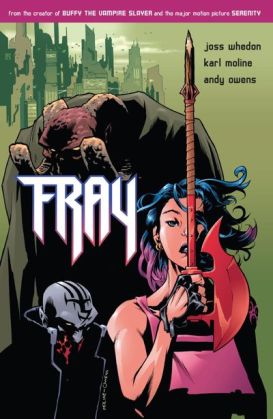 I not only highly recommend these eight volumes for any fans of Buffy that might not have made the leap to comics, but also Whedon’s Fray. Whedon wrote that back in the early 2000s with Moline drawing. It’s a future-set tale that reintroduces a new Slayer who also happens to be a thief. She appears in the fourth volume of Season 8, so I actually read it between three and four and thought it really helped flesh out the whole story.

So, I’m on to Season 9. I’ve got the first two volumes of Buffy and Angel & Faith, so I’m good to go there. I also decided to go back and read Angel: After The Fall, which was another Whedon-produced comic set at IDW written by Brian Lynch. I’ve got six of those books waiting from the library also, so I better get to reading!