Back when I worked at Wizard, I found a batch of Black Bull trades that were up for grabs. If you’re unfamiliar, that was the short-lived comic company created by the higher ups at Wizard. I haven’t read anything but the two Just A Pilgrim books, so I can’t speak to the overall quality of the line, but I liked these Garth Ennis and Carlos Ezquerra stories! END_OF_DOCUMENT_TOKEN_TO_BE_REPLACED

Garth Ennis is one of those comic creators who has earned a life-time pass as far as I’m concerned. His work on Preacher (my reviews of which you can read here, here and here) resulted in one of my favorite works of fiction ever. I’ve read plenty of his other stuff from the myriad of World War II-inspired tales to things like Punisher: Welcome Back Frank and The Authority: Kev. While most of those other books don’t match Preacher (probably because that book now stands on such a pedestal in my mind) they’re all enjoyable.

When I saw a copy of his Bloody Mary trade on a fellow Sequential Swapper’s page, I was quick to try and get my hands on it. We were able to work something out and I eventually got to reading it fairly recently. Packed with the usual Ennis dark humor and bloody violence, the two miniseries’ featured in the collection follow the adventures of a super soldier by the name of Bloody Mary who fights on the side of the US and Britain in their longrunning war with Europe in the year 2012. As you might expect from a Garth Ennis comic, neither side is particularly angelic and just about everyone has severe emotional and psychological problems, but that doesn’t stop them from having a sense of humor about all the terrible things going on around them.

Both stories — which were published in the mid-90s by DC’s short-lived sci-fi tinged imprint Helix — work really well in their allotted four issue stories which can be a nice change if you’re used to huge, overarching comic stories. It’s nice to see a writer and artist get in there, do their thing and walk away with four rad issues of art and story. Speaking of which, Carlos Ezquerra is pretty much the perfect artist for this book. He’d done plenty of dystopian war torn futures from his days working on 2000 AD. In fact, I’d say that, even though Mary herself is American and Ennis is Irish, the look and feel of Bloody Mary reminds me of what few British comics I’ve read and seen from the lates 70s/early 80s, but in a way that doesn’t feel old or tired. I’m not sure if this was their first pairing, but Ennis and Ezquerra would go on to work together plenty of times and now I kind of want to back and read some of those WWII stories. 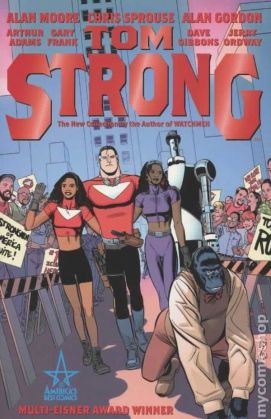 By the time Alan Moore launched America’s Best Comics through WildStorm  back in 1999 I’d probably read Watchmen, but it was still a little over my head. So, I wasn’t as crazy excited about ABC as I should have been. I’ve written extensively about League of Extraordinary Gentlemen here and here as well as Top 10, but the two glaring omissions in my ABC reading have been Tom Strong and Promethea. I’ve attempted to read both of these books at different times in my comic reading career and even have the very first issue of Tom Strong signed by Chris Sprouse (as well as a sketch of Tom that Sprouse very nicely did for me around the time of the book’s launch). And yet, neither clicked for whatever reasons.

Well, recently, again while perusing Sequential Swap, I saw the first volume of Tom Strong up for trade and decided to give it a read. Man am I glad I did. If you’re unfamiliar with the concept, Tom Strong is a kind of Doc Savage type character whose scientist dad decided to move to an island in 1899 when Strong’s mom was still pregnant with him. Tom was born into a pressurized containment unit where he was taught by his parents and their robot Pneuman but never had skin to skin interaction with them until the day an earthquake hit, his parents were killed and Tom emerged to be raised by the island’s natives, a group who had mastered their own sciences. Tom strong eventually married their princess Dhalua, became a renowned adventurer and had a daughter named Tesla.

Much like Bloody Mary, I enjoyed how these issues mostly did their own thing while also adding to the growing mythology of Tom Strong. And that’s really the beauty of this particular Alan Moore comic book, you get the feeling that this entire world exists in his head and he’s giving you exactly what details you require when you need them to not only keep you invested in the story, but also to show you how deep that well goes. Each issue is basically a self-contained story that also includes a back-up story, usually informing the formerl. I loved the storytelling on display which could be enjoyed both for the adventure itself, but also as a way of watching a writer convey story and worldbuilding to the reader without ever getting heavy-handed or boring.

Speaking of never boring, the art in this book is masterful. Sprouse’s style is absolutely perfect for the big, bold heroics that go along with the core of Tom Strong as a character and a comic book. His lines are so clean and clear that you always know exactly what’s going on which is even more impressive when you think about how dense Moore’s scripts can be. Adding to the visual fun is a host of beloved artists who offered their talents to the back ups. Art Adams and Gary Frank are two of my absolute favorites so seeing them do some stories was great. You also get to see Jerry Ordway and Dave Gibbons do their thing.

The crazy thing about this book is that it kind of felt like Alan Moore was using some of his crazy snake god magic on me through its pages as a way of inspiring creativity. There was something about the time and place and experience of reading this book that I’ve never experience before. As I read each issue, I was further driven to sit down and write my own stuff. I was literally reading the issue while also thinking about my own story which seemed to be growing at a much more rapid pace than usual and then putting the book down, flipping my laptop open and typing ideas like a madman. I don’t know if I was just inspired by the creativity on the page or what, but it was a really great experience.

KEEP OR DUMP: As you might already be able to tell by the reviews, I’ll be keeping both of these books in my collection because I enjoyed the reading experiences so much. When it comes to Bloody Mary, I’m sure I’ll want to return to this book both to experience this story again and also to  get a quick dose of Ennis that doesn’t involve reading a much larger run on a series like Preacher, Hitman or Punisher. Regarding Tom Strong, I’m keeping it and also doing my best to track down the other trades even though I know Moore doesn’t write the last two or three. I look forward to acquiring them and eventually reading the whole run altogether.