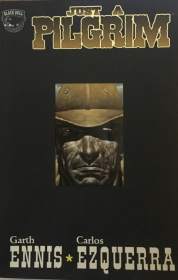 Back when I worked at Wizard, I found a batch of Black Bull trades that were up for grabs. If you’re unfamiliar, that was the short-lived comic company created by the higher ups at Wizard. I haven’t read anything but the two Just A Pilgrim books, so I can’t speak to the overall quality of the line, but I liked these Garth Ennis and Carlos Ezquerra stories!

These stories take place on an Earth where the sun went crazy and burned off most of the water (and people) on the planet. Those who lived, struggled to survive and find water, though some, like the Bible-loving Pilgrim seem to thrive. He wanders from place to place at the behest of his God, trying to save all the people he can from human villains and radiation-spawned monsters alike.

Just A Pilgrim feels like very much a part of the Ennis cloth. It’s got some very Preacher-y moments, but doesn’t go so far as The Boys. I’m not overly familiar with Ezquerra’s work, but it felt like he was channeling Steve Dillon who the world recently lost. The facial acting in these issues is on point, but then you get to see Ezquerra really get to have fun with the monsters and villains in the book.

Like I said, I’ve got the original Black Bull trades, but you can also buy The Complete Just A Pilgrim which Dynamite published not too long ago. I’d say if you like the western flavor of Preacher but are interested in an even more single-minded lead in a sci-fi setting, then you’ll be down for this one. 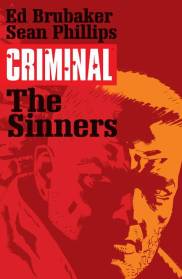 From there, I moved on to the fifth volume of Ed Brubaker and Sean Phillips’ Criminal which I got for five bucks at a comic shop because there was a small cut on the cover. I’ve been a fan of Bru’s since I first read Sleeper and only became more of one with his awesome Captain America run. Now I’m trying to go back and read his creator-owned stuff like Incognito, Fatale and Criminal.

I was concerned that I might not be able to enjoy the fifth volume of a book I haven’t read the beginnings of, but also knew that, while Criminal features recurring characters, each arc is standalone. Luckily, I found that to be the case in The Sinners, a story about an AWOL soldier trying to pay off his dead brother’s mob debt. His boss tasks him with figuring out who’s killing seemingly untouchable crooks all over town and the answer is pretty depressing any way you look at it.

Brubaker and Phillips work so damn well together, it’s almost not fair to any other creative teams around. The writer tailors stories to the artists’ strengths and their styles gel perfectly. If you’re looking from crime comics, this is the series to read. 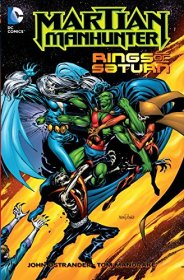 About a quarter of my To Read box consists of later volume trades. Sometimes in my travels I’ll get my hands on book number two in a series and see if I can find one either at a show, online or at the library. Well, I’ve had Martian Manhunter Volume 2: Rings Of Saturn for a while now and figured I should test the waters to see if I should still wait on that first book.

When I started reading comics, I just jumped in and did my best to figure out what was going on, as going back to the beginning of the volume or story wasn’t usually an option. I hoped that I’d be able to figure out what was up with these Martian Manhunter issues — #1 million, #10-17 to be exact — but have to say, it was rough.

Apparently a whole lot went on in the first 9 issues of this series that explained some deep history about Martians or whatnot that I failed to fully glean from the later installments. That’s not a dig against the stories written by John Ostrander and mostly drawn by Tom Mandrake, but just a note that this particular series definitely benefits from jumping on at the very beginning.