As I mentioned yesterday, I got to an early start when it came to watching horror movies this fall. So, I’ve got a lot to talk about! First, if you haven’t already, check out a pair of lists I wrote for CBR. One’s about movies and shows to follow Stranger Things up with while the other focused on the best classic horror movies to stream on Netflix and Amazon Prime!

END_OF_DOCUMENT_TOKEN_TO_BE_REPLACED 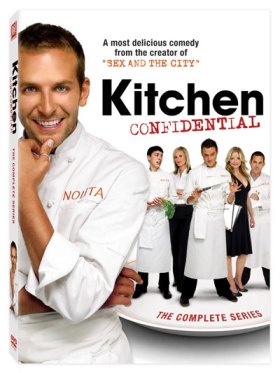 Back in 2005, I had no idea who Anthony Bourdain was, so he wasn’t the draw for me when it came to watching Fox’s Kitchen Confidential. It was all about the cast for me. I had seen Bradley Cooper in Wedding Crashers, one of my all time favorite movies. Sure he played a heel, but you could tell there was a ton of charisma under that douchey role. In addition to Cooper, the show also featured Nicholas Brendon, better known as Xander from Buffy (another favorite series) and John Frances Daley who I first dug in the amazing Freaks & Geeks and later in Waiting… where he played pretty much the same part (kitchen newbie). The cast also included John Cho who I probably wasn’t familiar with yet, Frank Langella (yeah, Skeletor), the lovely Jamie King and Sam Pancake who played Barry Zuckerkorn’s assistant on Arrested Development (another favorite). That’s a lot of goodness all in one package.

After getting really into Bourdain’s show No Reservations and remembering liking the few episodes I saw, I suggested to the missus that we watch the show. It was only two discs through traditional Netflix, but we still burned through them pretty quickly. The title of the show is based on Bourdain’s 2000 memoir and Cooper’s character share’s the famous chef’s name. The plot of the show revolves around Cooper’s washed up rock star chef getting another shot at running a restaurant thanks to Langella’s good faith. Cooper then puts together a team that includes Brendon, Cho and a few others. The key, though, is that Cooper needs to do everything on the up and up because he sees this as his last chance at this kind of opportunity.

Another aspect of the show I really enjoyed aside from the performances and comedy, of which there’s a great deal, was it’s various philosophical points about food and cooking. Cooper’s voiceover often reminded me of those scenes in Ratatouille where Remy describes how two different foods taste together. There’s lots of insight from the point of view of cook which I find really interesting. I’m not sure if these things are taken straight from the book (I’ve got my eye out for a copy) or if they were written for the show, but I liked the insight. As my role in our kitchen has gotten more prominent, I find myself drawn towards the world of cooking and restaurants a lot more than ever before, so a kind of insider look at the biz was a lot of fun for me.

We really enjoyed watching the series’ 13 episodes and I highly recommend checking it out. By combining a few well worn elements like a workplace drama and a guy looking to make up for past indiscretions, Kitchen Confidential wound up being something unique and fun. I’m pretty surprised the show didn’t do well, but considering Fox’s past with shows like Firefly and Arrested Development, it should come as no surprise that something with so much potential got the axe so early.

Much like spying Lost cast members, I love seeing folks from the Halloween movies (well, the ones I’ve seen and liked at least) in other flicks. I’ve recently had the pleasure and surprise of seeing Danielle Harris and Donald Pleasence in various flicks I didn’t even know they were in.

Danielle Harris popped up as a kid in two flicks about dads she doesn’t really like who get into some crazy situations. First up, I watched a movie called Back to Back (1996) starring her and Michael Rooker (who I’ve only seen in Mallrats, he looks kinda funny with hair). Oh, Bobcat Goldthwait is in it too and is super annoying, but don’t worry, he gets blown up pretty good.

Back to Back is not a good movie. It’s not altogether bad, it’s just kind of unremarkable. Rooker and Harris get kidnapped by this guy who has a score to settle with someone for some reason, so he escapes from a police station and blah blah blah. I guarantee you’ve seen this kind of movie before done better. But, if you’re like me and you’re looking for something to watch on Netflix Instant, you can probably do worse.

Harris also appeared as the angry daughter in The Last Boy Scout (1991). I’ll be honest, I wasn’t all that interested in the movie and still haven’t finished it from early last week (I had pretty bad luck picking movies as I’m sure I’ll get to in further detail in upcoming posts). I’m sure there’s some good stuff in there, I just need to finish it out. Thanks to this commute, though, it’ll be rough. Anyone want to give me one of those plug-in internet things? I’d greatly appreciate it and even plug the heck outta you, for what it’s worth.

On the Donald Pleasence front, I peeped him in two movies as well, first up the Sean Connery James Bond film You Only Live Twice (1967). In it, Pleasence plays Blofeld, the big villain for the early Bond flicks. Pleasence was the first guy to play Blofeld in person (you saw him petting his cat a lot and feeding fish before this) and boy does he look crazy nutso, but in a good way. It’s pretty clear that Donnie here was the inspiration for Dr. Evil in Austin Powers (down to the suit and even some of the mannerisms).

Pleasence also appeared in the 1979 version of Dracula starring Skeletor-Nixon himself Frank Langella as Drac. I read about the movie on Horror Movie A Day and thought it sounded pretty good. I was bored to tears for most of it, but Pleasence played a mental institute-running Dr. Jack Seward. He didn’t do much but be a dad for the parts I saw (this was another movie I couldn’t get through, even being a captive audience on a train. Ah well, you can’t go wrong with crazy Pleasance, though he still, in my opinion, never topped the upper echelon’s of crazy-old-guy he reached in Halloween 6.