As you can tell, I haven’t been blogging much lately. My days are filled with work, kids and house stuff, so I don’t have as much time to sit back down behind the computer and write out my thoughts on important things like movies and comics, but I’ve been lucky enough to see and read a lot of cool stuff lately and want to remember that.

So, let’s start with the trio of Dwayne Johnson movies I’ve seen recently. A few weeks back, unbeknownst to us we had a free trial of HBO. For a night, I thought we’d had the thing since we moved in six months ago and I’d just missed it, but the disappearance of the channels the next day revealed the truth. Still, I was able to take advantage and watch Justin Lin’s Furious 6.

I’m actually not very up on the Fast & Furious movies. I saw the first in the theaters way back in 2001, but I preferred the previous year’s Gone In 60 Seconds. Since then this series produced a few sequels that kept the motor running until it really kicked into gear in the past few installments. In a lot of ways, these movies have taken on a kind of comic book nature. The last three films have drawn from the previous ones as far as characters go and also, as Paul Scheer said on the episode of How Did This Get Made dedicated to the movie, they’re basically superheroes at this point who can’t die (or mostly can’t die). END_OF_DOCUMENT_TOKEN_TO_BE_REPLACED 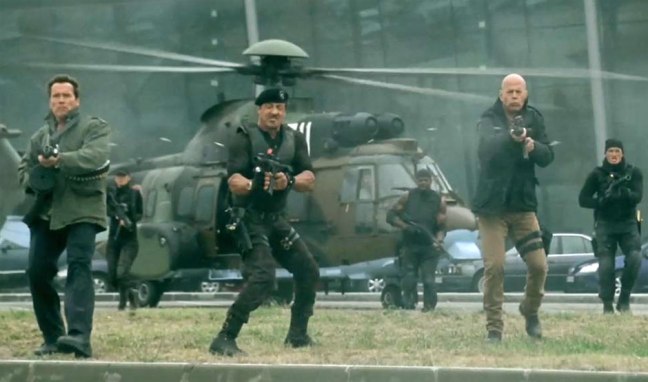 We’re probably not going to get into too much comic book movie news here on Explosions Are Rad because they’re covered really well on other sites, but it’s pretty cool that an action-packed flick like The Wolverine took the box office and made $86 million worldwide according to Variety.

We’re also not looking to delve too much into horror movie news for similar reasons, but Syfy’s Sharknado had enough (terrible) action scenes and explosions to qualify for a quick bullet point. TheWrap reported that the film will hit Regal, UA and Edwards Cinemas for a Friday, Aug. 2 midnight showing. It will be interesting to see if the so-bad-it’s-good phenomenon will transfer over to make actual money after being offered so often for free.

The Mary Sue recently posted an interesting story about a new Pakistani animated series called Burka Avenger that stars a female superhero who spends her days as a teacher. It definitely sounds like kid stuff, but the concept of a strong woman using her brains to fight crime is aces in our book.

Collider did an interview with Jon M. Chu about this week’s G.I. Joe: Retaliation DVD and Blu-ray release and also talked a bit about the third film which he’s signed up for. Briefly, he said that Dwayne Johnson and Bruce Willis are returning, they’re looking for a writer now and also to “double down on the adventure part of the movie” while also looking to possibly bring in more Joes.

Speaking of Dwayne Johnson, the man known as The Rock, Tweeted out an image from the set of Brett Ratner’s Hercules with the message: “Let it be to death or victory” THANK U my ‘Thracian soldiers’. Intensity & energy.”

There’s a flick in the works called Black Friday that revolves around a man trying to get his wife back after she’s kidnapped inside a giant mall. He’s got to perform crazy tasks to get her back. Sounds silly, but I spent enough time in the Palisades Mall to give this a look on Netflix. John Sullivan wrote a script that Darin Beckstead’s attached to helm. (via Deadlline)

World War Z fans can look forward to checking out the big budget zombie flick starring Brad Pitt in IMAX 3D for a week kicking off on Aug. 2. (via Deadline)