As you can tell, I haven’t been blogging much lately. My days are filled with work, kids and house stuff, so I don’t have as much time to sit back down behind the computer and write out my thoughts on important things like movies and comics, but I’ve been lucky enough to see and read a lot of cool stuff lately and want to remember that.

So, let’s start with the trio of Dwayne Johnson movies I’ve seen recently. A few weeks back, unbeknownst to us we had a free trial of HBO. For a night, I thought we’d had the thing since we moved in six months ago and I’d just missed it, but the disappearance of the channels the next day revealed the truth. Still, I was able to take advantage and watch Justin Lin’s Furious 6.

I’m actually not very up on the Fast & Furious movies. I saw the first in the theaters way back in 2001, but I preferred the previous year’s Gone In 60 Seconds. Since then this series produced a few sequels that kept the motor running until it really kicked into gear in the past few installments. In a lot of ways, these movies have taken on a kind of comic book nature. The last three films have drawn from the previous ones as far as characters go and also, as Paul Scheer said on the episode of How Did This Get Made dedicated to the movie, they’re basically superheroes at this point who can’t die (or mostly can’t die).

I still haven’t seen Fast 5, but that didn’t inhibit my enjoyment of Furious 6. We start off with the gang enjoying the spoils of a hest in the previous film until Johnson’s Hobbs shows up and gets the team back together to save the presumed dead Letty (Michelle Rodriguez) who died in yet another movie I’m pretty sure I haven’t seen. See, Letty’s family and family is CLEARLY the most important thing in this movie because it’s said roughly a billion times.

From there you get amazing set piece and fist fight after amazing set piece and fist fight. This movie goes to 11 and then just keeps going which adds an insane energy to it that sweeps you up and distracts you from sillier plot points like Brian’s seemingly pointless trip to an American prison. You know what that doesn’t matter? BECAUSE THEY FIGHT A PLAN WITH CARS AND GRAPPLING HOOKS AT THE END OF THE MOVIE! Oh, and on the plane? Dwayne Johnson fights a man that makes him look small. Think about that, it’s crazy in all the best ways.

It’s impossible to talk about these movies without talking about Paul Walker’s untimely death. Celebrity passings don’t usually get to me too much because I don’t actually know them. I feel for their families, but I don’t usually feel it too much myself. With Walker’s though, it did hit me, probably because he was so young, I enjoy his work and it was all such an unforeseen accident. Because of that, I’ve put off watching a lot of these movies lately, but I looked at this as kind of celebrating the man’s work in my own way. He was a part of something that still gives millions of people joy and that’s a pretty amazing legacy to leave behind.

Given that last paragraph, I’m going to skip over any kind of smooth or clever transition and just let you know that I watched Dwayne Johnson in another film, also on cable (Epix this time, which we always get and tends to have a few interesting choices). I was stoked when I first heard he was going to play the lead role in Hercules because, let’s face it, he’s perfect for the role.

In this version by Brett Ratner, which is based on a comic that even I never read, Hercules is a mercenary who travels the land with his crew, taking on jobs that usually involve killing other people who want to take over their employer’s property, goods and people. However, even though he is human, his storytelling companion boosts Herc’s rep by telling tales filled with mythic monsters and god-given labors.

In reality, Hercules finds himself helping a king whose intentions are not to save his people but to subjugate another’s. As you might expect, this does not sit well with him or his posse, so they wage a battle they’re not sure they can win.

This movie’s packed with the kind of awesomeness you’d expect from those involved. There are huge battle scenes that don’t look overly CGIed (which is a problem when that method is used for just about everyone but Peter Jackson). Sure, there’s some of that in there, but it didn’t have the video game-y feel that you see a lot these days. There’s an interesting mix of fighting styles in the film, too. Hercules wades right in with his massive club while Atalanta (Ingrid Bolsø Berdal) takes on the bad guys with a mix of martial arts and archery. You’ve also got the madman, the knife thrower and Ian McShane’s gadget user.

There’s also a solid amount of emotional weight and drama behind Hercules and his actions all of which comes out towards the end when he’s seemingly chained and captured. Johnson said that he was chained up for real and blacked out after every take which added to the overall intensity which comes through in the finished product. 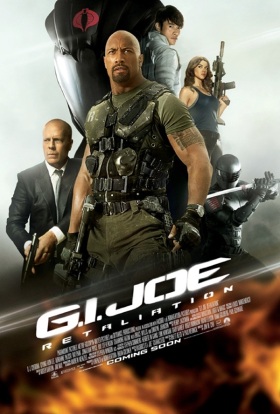 Which brings me to G.I. Joe: Retaliation, a movie I’ve seen twice now and could have sworn I already blogged about. Like the Fast & Furious movies, this is an example of what Johnson calls Franchise Viagra: bring him in and get a boost! Ain’t that the truth.

When I watched Rise of Cobra and wrote about it here on UM, I said I kind of liked it, but with each repeat viewing, that idea gets eroded a bit more. I just don’t care anymore about that movie and now I don’t have to because a far superior (and still somewhat silly) G.I. Joe movie exists thanks to Jon M. Chu. How does this movie handle that? Ignoring the first, bringing in The Rock and Bruce Willis, killing one of the few holdover characters and putting the Joes up against an over-the-top threat in the form of a villain posing as the President.

I liked how the script got flipped this time around. Instead of having access to all kinds of amazing tech, weapons and vehicles, this small group of Joes has to hide out in an old YMCA, use some tech (where’d they get that lipstick DNA analyzer, by the way?) and utilize their skills to retake the White House and stop a mega weapon from killing way more people.

Like I mentioned, there are silly elements here like the fake Secret Service guys wearing Cobra pins, the faux prez calling his new organization COBRA on TV and any number of other things, but like with Furious 6, I was already in it. I liked what was happening, I chucked at more than a few things and just had a great time. That’s what these movies are there for, to be enjoyed and boy do I.

I realized after writing all three of these movies up that they share something in common aside from the fact that they’re all action flicks starring one of the genre’s most charismatic stars. They’re also all awesome movies to catch on a lazy Saturday or Sunday. I mentioned Gone In 60 Seconds above, which is one of the best of the bunch, so are the National Treasure movies, the Ocean’s movies and the Step Ups. You don’t really need to remember every part of the plots, you can come in and out as needed and you’re definitely going to have fun. That’s a huge plus for a movie in my book.

But what do all three of these movies show about Dwayne Johnson as an action star. First off, he’s just all-around awesome. The dude is huge, does his fight choreography well and somehow doesn’t look like he’ll win each fight just by showing up and flexing (I’d tap out right there). But he also gets to some great emotional moments throughout these films and also shows off his funnier side, which was on full display back when he hosted SNL for the first time and won me over as a fan then. This dude’s got it all and brings it every time he shows up on screen.