Hi there cats and kittens, this week’s episode of The High Five podcast gets hep with a quintet of musicals from the 1980s that have roots going back to the 1950s! We have Happy Days and Grease to thank for these, plus the eventual power that kids who grew up in that older decade had in the latter one! This one was a real wild trip, but I had a gas putting it together!

Oh and if you want to list to the Spotify playlist I put together based on some of these films’ soundtracks, check it out!

Here’s a few cool pieces of Little Shop Of Horrors art too!

A while back I asked some of my pals what books I should check out to learn more about New York’s punk scene in the 70s. I don’t remember what nudged me to ask the question, but the resounding response was, “Read Please Kill Me!” I think I had a gift certificate to Barnes and Noble, so I picked it up. That was quite a while ago now that I think about it. Anyway, it was sitting in my to-read pile for however long and then I set up this current Ambitious Reading List and decided that it would make a great caboose to this reading experience.

Please Kill Me was written by Legs McNeil and Gillian McCain in 1996, but the version of the book I has is from 2006 and includes a few extra odds and ends. The book is an oral history much like Live from New York and Whores where large blocks of quotes from the interviewees propel the story along. The beauty of PKM is the width and depth of that McNeil and McCain were able to go to get these quotes. This book starts off back with Andy Warhol and his factory as kind of the primordial soup that punk rock grew out of (once scene spawned another in a sense) through the Doors and the Stooges into the classic bands like the Ramones, New York Dolls and even a little, tiny bit into the British scene. The authors interviewed everyone from scenesters and photographers to surviving members from all the most important bands and many who are no longer with us at this point.

To paraphrase an MTV show’s intro, I thought I knew about punk, but I had no idea. I’ve said before that I wasn’t a rage-filled kid. I think I had a very practical viewpoint on the world which helped me avoid a lot of the disillusionment in the real world that fueled a lot of punk rock kids. I was into then-modern punk/pop punk but when I started getting into original punk it was after reading articles in Guitar World and watching Syd and Nancy in high school. It was almost more academic than anything. I think I started off with that Ramones anthology from Rhino that covers most of their history. I also picked up the Sex Pistols’ Nevermind the Bollocks (I liked that they only had one real record but had no idea how common that was for these legendary punk bands). My buddy Jimmy also hipped me to the MC5 as this protopunk band that was from not too far from where we lived in Toledo, so I got Kick Out The Jams and loved it.

So, I knew some stuff. I knew some of the bands, but my knowledge wasn’t deep. I heard about the Dolls, the Dictators, the Dead Boys and lots of others, but just never got around to checking them out. I also knew the scene was pretty messy, but you really don’t get the feel for how messy until you read these peoples’ experiences. Man, it was nuts. Everyone was drinking, doing drugs, whoring themselves out, having sex with anything that moves, stealing, using, abusing, the whole lot.

The interesting thing about delving into any scene like this is discovering the small ins and outs of it. I was surprised to discover that there were only about 100 people in total living this life. It was quiet for a long time and then when it started getting popular, that was kind of the end of it, which stands to reason. Reading survivors recount some of the amazing and terrible things they’ve done to one another is a pretty singular experience.

I will say that reading this book changed how I listen to the Ramones a bit. I mean, I knew they came from the same scene as everyone else, but I think the somewhat gimmicky nature of the band and the decades between their debut and when I actually listened to them made them almost cartoonish. An amazing band with crazy-catchy songs, but still one that practically wore a uniform, changed their last names to Ramones and appeared in Rock and Roll High School. Finding out that they were drug fueled hopheads and prostitutes who actually went through shock therapy changes how you listen to songs like “53rd and Third” (which I clearly never paid too much attention to lyrics-wise), “Gimme Gimme Shock Treatment” and “Now I Wanna Sniff Some Glue.” I’m not saying I’m disgusted or will never listen to the Ramones the same way again, it just changes how I listen to them…for the time being until my crappy memory glosses over those details with something from a movie or comic.

My one complaint about Please Kill Me comes from a lack of context and full storytelling that happens throughout the book. In Live From New York, there are these short paragraphs in the beginning of a chapter that explain some details not covered in the interviews. In this book, you’re just kind of thrown in and have to figure out what’s going on. Since I was fairly uneducated on this section of rock and roll history, that got kind of confusing. There’s also some bands that get kind of glossed over or mentioned, but never much detail is given. Like, I know Debbie Harry and Blondie was part of that scene even if they were dubbed New Wave, but the band is only mentioned circuitously. Maybe that’s because they’re not the focus or maybe it’s because certain members wouldn’t allow themselves to be interviewed, but I thought it was a little strange how one of the biggest acts to come out of that area was more or less a foot note. There is a handy section in the back that explains who people are, but a few who were interviewed were omitted back there and that can be frustrating when you’re trying to remember so many names and add some context where there might not be some. 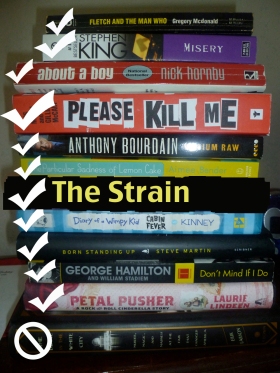 But aside from that, I really enjoyed this book. It’s definitely not for everyone, but I’m guessing if you’re already into punk rock, the tales you’ll read about in this book won’t be too surprising. Actually, if you’re not surprised by at least something in here, well, you’re a different person than I and that’s cool.

And with that, this Ambitious Reading List comes to an end many months after the summer. I really like this format because it takes a very large pile of books I have in my to-read pile (now a purple bin in our storage unit, actually), condences them down to a varied dozen and makes me focus on them. Overall, I’d say this group was greatly eclectic and very interesting. I might have quit on one book and replaced one with The Strain, but overall, I had a great time and have not only arranged my next ARL, but even finished the first book already!

We all knew a girl who was REALLY into Tank Girl, didn’t we?  For a lot of people my age who would have been teenagers when the flick came out, Lori Petty as Tank Girl completely exemplified the kind of outside the norm, Gen X, alternative thought process that appealed to the kids who were more concerned with which new bands were rad instead of which new brands to wear.

It’s kind of interesting because the character of Tank Girl is basically the female version of the slick friend who appears in tons of 80s movies. You know, the guy who tries really hard to get his geeky friend to ask a girl out (think Styles from Teen Wolf). But instead of trying to help a pal out, she’s trying to break out of prison and destroy a mega corporation in a post-apocalyptic future where it hasn’t rained in over a decade.

So, how did this quirky 90s subcultural flick based on a comic book I’ve never read hold up? Pretty great, actually. Like Batman and Robin this is a big, goofy  movie with all kinds of craziness (kangaroo mutants played by Ice-T, tanks all over the place, a villainous Water & Power organization). It’s bright and it’s loud and it’s odd and that’s what makes it great. I can’t see a major studio getting behind a movie like this and am surprised MGM did the same in 1995, to be honest. Heck, there’s a Cole Porter song and dance number in the middle of a brothel in the movie!

I think the cast is great and everyone really jumps into these roles that could have been done with too much tongue in too much cheek, but instead Petty, Naomi Watts, Ice-T, Maclom McDowell and the rest really have fun with it and give it their kinetic all.

Personally, I don’t have a connection to this movie. I think I rented it once from Family Video back in my ongoing rental spree, but didn’t remember much about it. I’ve liked Petty ever since I saw A League Of Their Own and think it’s a ton of fun and a great movie to check out. Also, as I tweeted while watching, Kat Dennings’ character on 2 Broke Girls sounds like she lifted her entire speech pattern after Petty’s. Give it a listen and then compare. Funny stuff.

I actually had a pretty good time compiling last year’s list of my favorite albums of the year and figured now’s as good a time as any to get around to this year’s. The funny thing about this year is that, while I probably acquired more CDs than I have in quite a while thanks to flea markets, garage sales and sales, I didn’t actually buy a lot of new music. New to me of course, but not new new. So, with that in mind, I’ll probably do another post about my favorite new-to-me discs of the year next week. Anyway, my favorite records of the year are a mix of smokey rockers, soul sisters, pop rock stalwarts, metal dudes, collaborators, introspective song writers and more. Hit the jump for the full list! END_OF_DOCUMENT_TOKEN_TO_BE_REPLACED