Avengers Arena was one of those books that I heard about because it raised the ire of the internet (or at least the part where people who can’t accept that comic characters are pretend) because it killed off some beloved younger characters from the Marvel U. When I saw all three volumes available on the library system, I requested all three and dove right in.

The idea here is that the book, written by Dennis Hopeless and mostly drawn by Kev Walker, revolves around a mysteriously powered-up Arcade brings 16 young heroes to Murder World and tells them they have 30 days before they can leave. At that point, only one can exit, so they should probably kill each other. As it happens, this is something that a great deal of the characters from Avengers Academy, Runaways and other books don’t have a big problem with the idea. END_OF_DOCUMENT_TOKEN_TO_BE_REPLACED

Sometimes I grab a series of trades the purposefully have a connection while other times I just grab whatever looks interesting out of my boxes. In the case of this week’s post, I did the latter, but realized that I had a nice connection in that both the second Exiles book and Matt Kindt’s Revolver feature characters dealing with the differences in the realities they experience! Want to know more? Hit the jump! END_OF_DOCUMENT_TOKEN_TO_BE_REPLACED

Thunderbolts is one of those teams that I’ve been familiar with since its inception, but never read regularly, popping in here and there when particular arcs interested me. The basic idea since the post-Onslaught inception of the team has been “villains playing hero” in various capacities. Lately, that’s translated into criminals at a maximum security supervillain prison being allowed out to fight crimes. Run by Norman Osborn for his own nefarious reasons, the project is now run by the former U.S. Agent and Luke Cage with an eye towards actual reform. The team consists of OG T-Bolts Fixer, Songbird and Mach Mach V (now legit heroes) as well as Juggernaut, Moonstone, Ghost, Crossbones and Man-Thing. When I first heard about this series and the line-up I remember having big, huge question marks about those last two, but they’re explained very well in the series.

The adventures include some post-Siege clean-up that also serves as an introduction for a new Troll character who will, I assume, eventually become a larger part of the book as well as exploring a cave with some Terrigen crystals that also happen to be making some bonkers monsters. These larger adventures plus a few tests for the new T-Bolts and a prison riot offer plenty of room for the team members to show why they’re useful, what problems they  might present and the potential for this group.

While I can get a little tired of the A-list team books that get mired in whatever huge overarching stories Marvel or DC is working on at the time, I’ve found that I really like these lower level ones that not only have room to do their own thing, but also pull some of the less-used characters from a particular universe and do some really fun stuff with them. In the case of Thunderbolts, it helps that I’m not a hard core Marvel fan because I don’t have nearly 50 years of Juggernaut stories in my head. I’ve got a basic knowledge of all these characters and can enjoy these new stories without constantly comparing them to the old ones. One of Parker’s strengths has always been creating that balance between appealing to new and old readers alike and he does that all over the place here. He excels at looking around the sandbox, seeing what toys the other kids aren’t playing with and creating some really fun, excited stories with what he’s got.

I’d hoped to get my hands on the trade between Cage and Violent Reject in order to read all three back to back to back, but it wasn’t in the cards, so I just went on and checked out the latter after reading the former. Between a recap on the first page and Parker’s writing, I didn’t feel too behind and was able to catch right up. I had a feeling that would be the case after reading so much of his Hulk material out of order.

Anyway, I realized with this trade that Thunderbolts actually feels like an old school Marvel book where you’re not reading these big arcs necessarily, but instead one or two issue adventures that flow really well into one another. Don’t get me wrong, there are definitely overarching plot lines being fleshed out, but those aren’t the sole focus of the stories. There’s no “writing for the trade” here.

This collection sees the team going up against some of the giant monsters that Parker first wrote about in Red Hulk: Scorched Earth, but you definitely don’t need to read both books to get the gist (which is basically, giant monsters are about to attack Japan, go stop them). The team now includes Hyperion who may or may not be evil (which gets answered decisevely soon enough). After that, Man-Thing disappears to fight creatures from another dimension, Cage and Dr. Strange team up to find Satana and the team gets sent to a mystical castle filled with Nazi zombies. Oh and a B team of T-Bolts gets put into motion back at the prison. Like I said before, lots of stuff goes on with tons of action, but you never lose sight of the characters themselves in these adventures, which is, I’m realizing, a Parker hallmark.

Artwise, I don’t think I’ve read a Kev Walker or Declan Shalvey comic before this, but I am definitely a fan of their work now. They both have kind of offbeat styles that I like, imagine more superhero-y Hellboy or B.P.R.D. type artists. While they look somewhat similar — you don’t get thrown out of the story with the change in styles as much as some other books — they both bring their own talents to the table and each have a knack for handling human characters next to monstrous ones and large moments with the small.

KEEP OR DUMP: I’m definitely keeping these books and looking for the rest of Parker’s trades. I hear they get into some time travel stuff, the B-team gets to take center stage and then the whole thing turns into Dark Avengers. As with most of Jeff Parker’s Marvel work, I’m in it now. 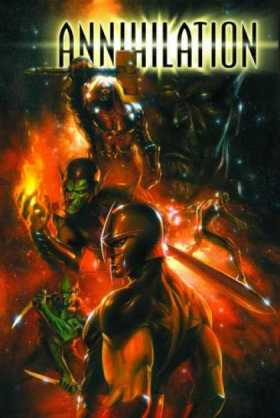 ANNIHILATION BOOK ONE (Marvel)
Written by Keith Giffen, Dan Abnett & Andy Lanning, drawn by Mitch Breitweiser, Scot Kolins, Ariel Olivetti & Kev Walker
Collects Drax The Destroyer #1-4, Annihilation: Prologue & Annihilation: Nova #1-4
Back in my days at Wizard, I wound up being the go-to guy for Annihilation interviews. I had just read Infinity Gauntlet for the first time and was pretty high on the idea of Marvel’s space characters getting a jump start. With very few exceptions, I had very little experience with these characters, so it was kind of fun to just be thrown into the middle of all this craziness and see where it went. When these issues were coming out, I had trouble not comparing the Annihilation set-up with that of DC’s Infinite Crisis. Both had four four-issue minis leading up to a main series. At the time it felt like Marvel did the whole thing better because their minis lead into the main series better. I can’t say I necessarily feel the same way now, but at least we didn’t have to get four one-shots to actually cap those stories. But, as usual, I’m getting a little ahead of myself. END_OF_DOCUMENT_TOKEN_TO_BE_REPLACED