Sometimes I grab a series of trades the purposefully have a connection while other times I just grab whatever looks interesting out of my boxes. In the case of this week’s post, I did the latter, but realized that I had a nice connection in that both the second Exiles book and Matt Kindt’s Revolver feature characters dealing with the differences in the realities they experience! Want to know more? Hit the jump! 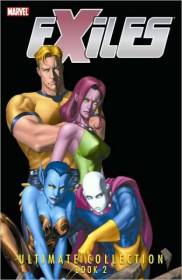 After the insanity of the first 19 issues (which I read a few years ago after getting a pile of the Ultimate Collection trades at an NYCC for $5 each), the dimension hopping crew consisting of Mimic, Blink, Morph, Sasquatch, Nocture and Sunfire continue saving realities in the hope of eventually setting their right and returning home.

This volume deals with worlds over run by Warlocks (the mutant, not the male witches), ruled by evil Tony Stark (very Trump-like, I must say), protected by the Heroes For Hire on a global scale and infested with vampires thanks to Captain America. The usual fun-with-alternate-realities ideas are there, but this groups travels start to take their toll, especially later in the volume when each of them got bounced to different places for different amounts of time. Some reunited with lost loves while others battled alien monsters for years. In other words, this volume also deals more with this group and their history because it’s had time to develop over the book’s three years in existence.

Chuck Austen took over for Exiles #26-30. His story feels a little off compared to what I was used to from Winick, so I’m curious to see how he does as the main writer moving into the next volume. I know people don’t really enjoy his X-work, but then again, it’s a lot different writing your own book than trying to fit in on someone else’s run. Mega kudos to the increasingly large Exiles art team. Calafiore is and always will be a favorite of mine, but Henry and Walker also came in to lend their unique styles to arcs that played really well to their individual strengths. 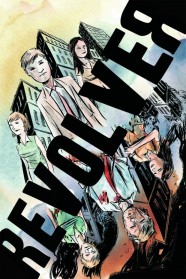 It took me way too long to get around to reading Matt Kindt’s wonderful 2010 graphic novel Revolver from Vertigo. I’ve had this OGN in my To Read box for a while which is crazy considering I loved Super Spy and the Pistolwhip stuff I’ve read.

Revolver focuses on a guy named Sam who finds himself living in two worlds. One is super mundane and boring. He’s got a job at a newspaper he thinks he’s better than and a boss who knows he’s full of it, plus a girlfriend seemingly obsessed with furniture and not much else. In the other, terrorists have nuked half the country and he’s part of a roving band of reporters trying to spread whatever news they can dig up. When he falls asleep in one reality, he wakes up in the other.

This is an interesting take on this kind of story because Sam comes to think of one reality almost like a video game, something that he can play in, but it doesn’t REALLY matter because it’s just a dream, right? That is, until he realizes someone else might be doing the same thing!

This isn’t the easiest book in the world to read, but that’s a good thing. Like a movie that would bounce back and forth between realities, there are certain cues that tell us which world we’re dealing with. One has a blue tint while the other features a grayish one. There might even be a slight difference in the font colors, but it might also be an optical illusion, I really can’t tell. Kindt also includes various physical and environmental cues that clue you in on which reality you’re dealing with. It took me a while to pick up on some, but once I did, the whole thing made a lot more sense. Much like a quality movie of this ilk, I’ll be keeping this volume for future reads.