Good golly, has it really been NINE months since I posted about a John Carpenter movie? Well, after checking out 1980’s The Fog last fall, I actually watched the next two films in relatively quick succession (for me at least). But, I never got around to writing about those films: Escape From New York and The Thing. I wanted to get back on this train, so I watched Escape again and here we go.

The first thing that struck me about this film is the scope. All of Carpenter’s movies revolve around strange things happening in the real world (masked killers, ghost pirates, stalkers and voodoo gangs) which create these smaller, twisted realities. But, with Escape, he’s creating a whole world. The Big Apple has been abandoned, the island has been walled off and turned into a prison. On top of all that set dressing we also have characters who all feel like they’re as lived in and sometimes legendary as possible.

And a lot of that comes from Kurt Russell’s portrayal of Snake Plissken. The man doesn’t say much, looks cool and is known by EVERYBODY (even if he’s shorten than expected). He’s also got a deep history hinted at but never fully delved into. This is a nice trick that’s played in comics when it comes to characters like Punisher, Wolverine and John Constantine where we’re impressed (and possibly scared) by them because just about everyone else is. Russell fills the role with his own presence and created an iconic character who continues to inspire comic books and toys to this day. 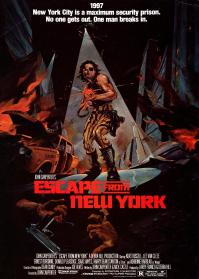 Adding to that, you’ve also got the denizens of New York, one of the strangest groups of people this side of Thunderdome. Creeps, weirdoes, evil geniuses, murderers and Cabbie? Seriously, why is Ernest Borgnine in this place?! He seems so nice (except for when he ditches everyone). Questions like that might not come the first time you watch the film, but pop up the more times you check it out which broadens the world.

On the surface, it might seem like Escape is an outlier in Carpenter’s filmography because there aren’t any supernatural forces at work, but if you look a little deeper you’ve got the clear influence of westerns (lone gunman with a reputation entering a place and getting the job done), the concept of being trapped by something nefarious and Carpenter’s growing cast of actors who appeared in several of his movies like Russell, then-wife Adrienne Barbeau and Halloween‘s Donal Pleasence as the president (who gives a great latter day Loomis performance here).

As much as I like this movie, I have a weird relationship with it. As it turns out, I think I actually watched the sequel Escape From LA first back in high school, so there are huge portions of that movie that live in my brain because that was back when I could absorb the most information. Because of that, I kept wondering when the map seller would show up or when the basketball scene would happen. The other problem is that I seem to fall asleep during this movie more than any other. I don’t know what it is, maybe the music or the subdued performances from many of the cast members. More likely, it’s the fact that I can barely stay up past 11:30 these days. Whatever the case, I’ve started this film more times than I’ve finished it and yet I still love the opening 20 minutes which sets everything up so well. I’d love to see this one on the big screen to really feel the full force of this huge, sprawling and yet subtle at times world that Carpenter crafted.

You might be expecting me to move on to The Thing next, but that won’t be the case. Much like with Halloween, I love that horror classic a lot and, as I mentioned above, watched it not too long ago. I find its best to not overdo it when it comes to favorite horror movies because they can lose some of their power if you’re TOO familiar with them. I think it’s also safe to say that I don’t have much in the way of unique thoughts on the masterpiece of stranded, paranoid beauty he created there (plus I wrote about it a bit back in 2011). That means I’ll be moving on to Christine in the near future!

Hope everyone had a great Christmas, Hanukkah, etc.

I’ve got to be honest, the last thing I saw Chuck Norris in was a series Karate Kommandoes clips I was watching on YouTube a few months ago. Before that it would be Dodge Ball (great cameo), then Walker Texas Ranger episodes and before that, Sidekicks. So, I don’t really have a lot of experience with his more action-oriented flicks. I’ve got to say, I’m none too impressed with my double feature of The Octagon and Code of Silence. So, here goes

Let me start by telling you all that it took me FOUR DAYS TO WATCH THIS MOVIE. Which is to say that it’s not the most thrilling of films. It’s also close to incoherent as you’re never really sure who Chuck’s character really is. He seems to be a law enforcement agent of some kind, but, as far as I can remember, it’s never directly stated what kind. From there we get all kinds of ninja attacks (did American audiences not know what ninjas were pre-1980?) that look close to slow motion and Chuck talking to himself in this weird, annoying echoy internal monologue.

This really is a lame movie. Please don’t watch it unless you’re in a room full of your friends with a few dozen beers each. In that case, it would be a grand viewing experience, otherwise, it might take you four days to watch it. That’s about 20 minutes a night I’ll never get back, sigh…

Luckily, Code of Silence was much better, though not really all that good in and of itself. It’s good in the sense that it’s a crazy, 80s action movie with a remote control tank of sorts as back up! The basic idea is that Chuck’s a good cop who doesn’t like how all the other cops are covering for this old cop who shot a kid in cold blood. His friend’s kid also gets kidnapped, so Chuck’s going after her, but he can’t get any help from his fellow officers. So, he’s got to go after the bad guys on his own (with the aforementioned tank-thing). There’s a pretty cool scene where Chuck holds his own in a bar full of attackers until a dude throws a pool ball at the back of his head. There’s not much past that as far as the martial arts go, but the last scene with Chuck and the tank going after the bad guys is classic 80s action (what more would you expect from the guy who directed Above the Law, Under Siege and The Fugitive). COS is way better than Octagon, though it’s nowhere near the martial arts extravaganza I was hoping for. Also, in the plus column is that Dennis Farina co-stars as a wounded cop (love that guy).

Well, there’s not much else to say about these movies. Neither is awesome, even by action movie standards. I was pretty shocked by how slow the fight scenes in Octagon felt. I mean, I didn’t expect him to be kneeing people in the face Tony Jaa-style, but even the penultimate fight between him and the masked ninja felt more like a fight from Double Dragon for the NES than one featuring Bruce Lee’s sparring partner. Well, at least I didn’t buy these movies and I can always watch Chuch fight Bruce Lee in Enter the Dragon (it’s Way of the Dragon) yeah, that’s what I meant (then why did you say Enter the Dragon?).