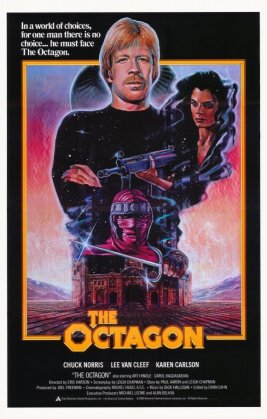 Hope everyone had a great Christmas, Hanukkah, etc.

I’ve got to be honest, the last thing I saw Chuck Norris in was a series Karate Kommandoes clips I was watching on YouTube a few months ago. Before that it would be Dodge Ball (great cameo), then Walker Texas Ranger episodes and before that, Sidekicks. So, I don’t really have a lot of experience with his more action-oriented flicks. I’ve got to say, I’m none too impressed with my double feature of The Octagon and Code of Silence. So, here goes

Let me start by telling you all that it took me FOUR DAYS TO WATCH THIS MOVIE. Which is to say that it’s not the most thrilling of films. It’s also close to incoherent as you’re never really sure who Chuck’s character really is. He seems to be a law enforcement agent of some kind, but, as far as I can remember, it’s never directly stated what kind. From there we get all kinds of ninja attacks (did American audiences not know what ninjas were pre-1980?) that look close to slow motion and Chuck talking to himself in this weird, annoying echoy internal monologue.

This really is a lame movie. Please don’t watch it unless you’re in a room full of your friends with a few dozen beers each. In that case, it would be a grand viewing experience, otherwise, it might take you four days to watch it. That’s about 20 minutes a night I’ll never get back, sigh…

Luckily, Code of Silence was much better, though not really all that good in and of itself. It’s good in the sense that it’s a crazy, 80s action movie with a remote control tank of sorts as back up! The basic idea is that Chuck’s a good cop who doesn’t like how all the other cops are covering for this old cop who shot a kid in cold blood. His friend’s kid also gets kidnapped, so Chuck’s going after her, but he can’t get any help from his fellow officers. So, he’s got to go after the bad guys on his own (with the aforementioned tank-thing). There’s a pretty cool scene where Chuck holds his own in a bar full of attackers until a dude throws a pool ball at the back of his head. There’s not much past that as far as the martial arts go, but the last scene with Chuck and the tank going after the bad guys is classic 80s action (what more would you expect from the guy who directed Above the Law, Under Siege and The Fugitive). COS is way better than Octagon, though it’s nowhere near the martial arts extravaganza I was hoping for. Also, in the plus column is that Dennis Farina co-stars as a wounded cop (love that guy).

Well, there’s not much else to say about these movies. Neither is awesome, even by action movie standards. I was pretty shocked by how slow the fight scenes in Octagon felt. I mean, I didn’t expect him to be kneeing people in the face Tony Jaa-style, but even the penultimate fight between him and the masked ninja felt more like a fight from Double Dragon for the NES than one featuring Bruce Lee’s sparring partner. Well, at least I didn’t buy these movies and I can always watch Chuch fight Bruce Lee in Enter the Dragon (it’s Way of the Dragon) yeah, that’s what I meant (then why did you say Enter the Dragon?).