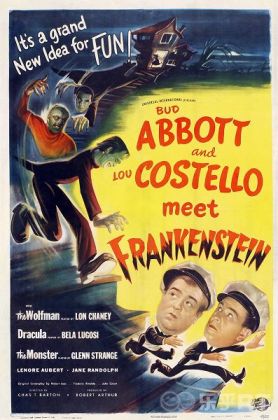 I was looking at the calendar last week and realized that there wouldn’t be another Friday the 13th until November. I celebrated last month’s by watching Funhouse and The Shortcut, but wanted to go all out for this one. So, here are a review I’ve been thinking about for a few weeks along with a few new ones! END_OF_DOCUMENT_TOKEN_TO_BE_REPLACED

Much like Dracula, I thought I knew the story behind Phantom Of The Opera from seeing it done many other times in many other forms: disfigured guy loves woman singing in opera, does some nasty stuff to get her the lead, wears funny half-mask, chandalier falls, yadda yadda yadda. As a nice surprise, while all of those things did happen, there was also a lot more going on in this mostly silent film starring Lon Chaney.

First of all, there’s a bigness to this movie as a whole that I wasn’t expecting. The opera set looks gigantic and seems to have a thousand people on it at all times. As the poster here boasts “a cast of 5000 others” it definitely feels like that between the performers, the back stage people and the ubiquitous mob of people going after the Phantom.

On a similar note, there’s a lot going on under this opera house. I thought he was just hanging out in a room somewhere, but there are actually caverns that were torture chambers. This is a nice way of getting to one of my favorite aspects of this movie: the Phantom is basically a death-trap supervillain from a comic book. The girl doesn’t really want to be with him so what does he do? He puts her lover and his cop friend first into a room that generates intense heat and then another that can either drawn them or blow them (and the opera house) to smithereens thanks to barrels and barrels of gunpowder.

The version of the movie that’s on Netflix Instant is a little odd, though I’m not sure if other versions differ. This one has music and even some opera singing on the soundtrack which is all well and good, but there is some really funky stuff going on with the color. Of course, being from 1925, the original film is black and white, but every scene is also tinted with yellow, green, blue or red (I think that’s all, though there might be more). This is kind of neat, but I think it takes away from the starkness of black and white that would have served the film better. Also, it’s very distracting when cutting between two different scenes and the color compeltely changes. There’s also a whole portion that suddenly turns into actual color. Not sure what that was about, but I wonder if a fully black and white version exists out there, I’d like to see that if so.

I’d also like to see more Lon Chaney movies. I must admit that I didn’t really realize that Lon Chaney and Lon Chaney Jr. were two different people. As I’ve said, my experience with these older horror movies is pretty limited, but I’d really like to learn more about both men. Let me know in the comments if you know of any good books or documentaries about them.

I can’t say I was scared by this movie, but I still really enjoyed it. The actual reveal of the Phantom’s true face has been spoiled for me for years, but the way it was done had kind of a derp feel to it. It did become scarier as the movie went on, especially when he’s hanging out on top of the roof of the opera house. Even without being scary (my 17 month old didn’t even flinch when they revealed his true face, though it might have been because I laughed) this is still the kind of movie that has a lot of coolness going for it.