I was looking at the calendar last week and realized that there wouldn’t be another Friday the 13th until November. I celebrated last month’s by watching Funhouse and The Shortcut, but wanted to go all out for this one. So, here are a review I’ve been thinking about for a few weeks along with a few new ones!

I’m woefully unfamiliar with Abbott and Costello movies. Much like The Jack Benny Program, I listened to their Old Time Radio show a lot as a kid, but didn’t get into their films. So, when I saw a DVD set at my local library last week that featured Abbott And Costello Meet Frankenstein from 1948, I snatched it right up.

I actually watched this one with my daughter last weekend, but I don’t think she paid too much attention. Still, I had a great time with it. I mean, what’s not to like, especially for someone who enjoys these actors/characters and the Universal Monsters? In addition to Frankenstein — played by Glenn Strange this time around — the movie also includes Lon Chaney’s Wolfman and Bela Lugosi’s Dracula. While not considered part of the Universal Monsters cannon, it’s still fun to see these characters all together and the gags that ensue. That one with Costello sitting on Frankenstein is my personal favorite! 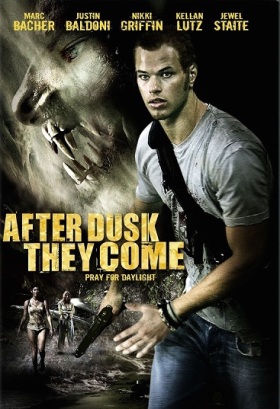 Unfortunately, not all of the scare fare I’ve watched recently has been so entertaining. I’ve had a review copy of After Dusk They Come sitting around for a few years. I thought it started off well with a scene set in the 1920s on a strange island playing home to strange, murderous creatures. Cut to the present and a quintet of people including Kellan Lutz and Firefly‘s Jewel Staite wind up marooned on the same island. It doesn’t take long for them to start getting picked off and the creatures to make themselves known again.

Here’s a fun fact about this movie that was made in 2009, but not release until 2012: the producers hated the results, so they made it again as The Lost Tribe. Now, I haven’t seen that movie, but I have seen the box and the first thing that comes to mind is, “Wow, you guys are really trying to rip-off Predator, huh?” Well, that’s the case with this movie too. I LOVE Predator, so everything from the jumping-unseen-through-the-trees scenes to the sound effects to the smell-covering stuff stuck in my craw. It’s basically like the filmmakers thought, “What if Predator was on an island, there were more of them and they killed a bunch of a-holes without guns? Oh, also, let’s throw in some The Descent for good measure.”

I was also really confused by these creatures. Why couldn’t they see Staite? Why did they seem invisible earlier on? Why did they look like humanoid cats? On one hand, I wanted to know the answers to those questions but on the other, I pretty much didn’t care and wanted it to end.

While I had a strong desire to see Abbott & Costello, these other movies were attempts at clearing out a little space. I have a lot of stuff that I haven’t gotten to over the years and I’m in a cleaning-out mode. That’s why I finally watched Dusk and why I turned my attention to a Roger Corman’s Cult Classics Double Feature offering, Up From The Depths. After Dusk, my expectations were super low. I also assumed I’d seen both of these movies before, but am not so sure now. Anyway, I put Depths on while finishing up my work for the day and actually found myself really enjoying it.

Just from looking at the poster, I assumed this would be a hardcore Jaws ripoff, but like Piranha, it’s more of a thematic cousin than a malformed twin (I’m looking at you Dusk)! In this case, a Hawaiian resort is terrorized by a giant fish-monster-thing. While the tropes are there — someone not wanting to cause a stir for financial reasons, grizzled sailors and a plan to blow up the monster — this movie takes enough detours and includes a fair amount of humor to the point where it feels like its own thing.

Like Jaws, this film plays up the mystery of the attacking creature by using POV shots and then spurting blood in the water to great effect. I watched the making-of doc on the DVD and, also like Jaws, this was a product of problems with the monster they created. The more I write about it and think about it, I can see more and more Jaws comparisons and yet they still don’t bother me too much because the characters and setting were different enough to keep me interested.

This might sound hypocritical considering what I just wrote about Dusk, but I guess it’s a pretty fine line between appreciating an homage or crying “Ripoff!” at the screen. Did I mention that I’m way more scared of underwater stuff than just about anything on the planet aside from straight razors? There are a ton of those scenes in this movie, which not only gave me the willies, but also add another layer of separation between it and the source material. I don’t think I’d say they one-upped Jaws in that department, but they tried to and that counts for a lot in my book.