I’ve said it before and I’ll say it again, but M.A.S.K. may have been the perfect 80s toy line. Shrink down G.I. Joes and put them inside Transformers? Yeah, I’m on board that idea all day long. It’s been a while since I shined the spotlight on these rad 80s ads, but I was dazzled by the use of actual race cars in this one to sell toys! Back at my folks’ place, I have two duffle bags filled with these vehicles and after watching this spot, I want to dig them out! This reminds me that I should watch the animated series on DVD and also catch up on the IDW comic. I’m missing out on so much M.A.S.K. goodness!

Here’s a look at some of the MASK toys I mentioned in my post about the new DVDs from Shout Factory yesterday. Of the toys seen above, I had Switchblade, Thunder Hawk and Gator. A neighbor-friend had the Boulder Hill Playset and I was very jealous. Still am. Gator came with a metal depth charge thing that fit in the back and you could launch out that looked like a tiny barrel or a shiny piece of gnocchi. My dog Rusty ate it for some reason, but she pooped it out and I got it back. I know, gross right? Scanned from the first issue of the 1985 Punisher miniseries. 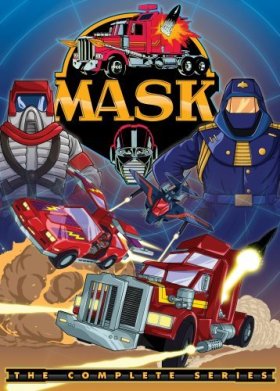 As a kid, I was absolutely taken with MASK. Not only did it have colorful heroes each with their own super-powered helmet, but also a series of vehicles that all looked normal before turning into far more deadly modes of transportation. What’s not to like? I loved the cartoon and went nuts for the toys. I was recently checking out a website (can’t remember the link) with a list of the different toys and vehicles only to discover that I had roughly half of the output from Kenner. I remember staging hugely complex battles between good guys and bad all over my living room, even posting one hologram version of a character up on a lamp, only to discover he had completely melted! Oops.

If you’re unfamiliar with the concept, MASK is a team of good guys run by Matt Trakker. Their main enemies come in the form of a terrorist organization called VENOM run by Miles Mayhem. While Miles seems to have a pretty stock group of goons to choose from, Scott hand picks operatives depending on their skill set. Everyone on both sides has a mask/helmet that has a unique ability AND a transforming vehicle.

When I got to college and later started working for Wizard, I noticed that MASK was one of the huge blank spots when it came to cartoon DVDs. Transformers, G.I. Joe and Thundercats were all available in one clunky form or another (and in far, far better sets today thanks to Shout Factory), but you had to go with bootlegs or old VHS tapes if you wanted to view the war between MASK and VENOM.

Until today that is! Thanks to the valiant efforts of Shout Factory, the company that has routinely put out stellar collections of classic animation for fans. I haven’t had a chance to go through the pair of behind the scenes features on the DVD yet, but I did get through the first two discs. The episodes look great! The menus are fun and detailed, with nods to the show, but without getting in the way of your viewing experience (like, say, those awful Buffy menus that take forever in their efforts to show off how “cool” menus can be). The overall presentation is also pretty darn good. I’ve got a basic DVD player and a high def TV, but the images all looked very crisp and sharp (as crisp and sharp as the original animation would allow). As always, Shout did an awesome job.

The real question is how the show holds up. I can’t tell you how many times I’ve gone back to beloved shows from my childhood only to cringe at a ridiculous premise or find that my young mind remembered a lot more action and intrigue than was actually on the screen. There was a little of that with MASK, but I actually had a good time watching the first two discs. Sure, there’s a lot that doesn’t make sense. Why does Matt Trakker’s son Scott know about his dad’s super secret organization? Who makes those awesomely powerful helmets? Why does Miles Mayhem hire such dummies? How did VENOM get MASK’s tech? And most importantly, what the heck is VENOM’s goal? They steal all kinds of weird stuff, from mystic artifacts to bleeding edge science, but never for any real ends that we know about.

I can get past all that though because, for all its goofiness the show is still fun. Plus, I’m nostalgic, so I’ll allow for such things. I’ve also learned a thing or three about animation from that era since I was a good. For instance, animation studios usually reused motions whenever possible or huge cut scenes because it was cheaper. Watch a few episodes of He-Man and notice how many motions you recognize or how many times they use the transformation sequence. It’s a lot. With MASK, I was expecting such things and while they did use the “put the masks on” sequence every episode, the rest seemed pretty fresh. That includes the brief scenes showing the MASK team members as Trakker calls them to arms. One dude is a dog groomer, another a rock star, you get the idea. I kept expecting them to reuse these bits, but on the eps I watched, they were all knew and actually pretty funny. That might not be the case as the series progresses, but I’m definitely interested in working my way through the series to see!

I’ve got MASK fever and the only cure is more MASK commercials. Man, these toys were SWEET. While this one lacks the live action dude in the full-size helmet of last week’s installment, I have a long standing love and affection for playsets, probably because I only had a few of them and wanted them all. The Boulder Hill Playset is SICK. It’s got that boulder and the gun turret and the gas station that armors up. So rad. I’m kind of surprised that this one hasn’t made a comeback, but I wonder if they were expensive to make. Anyone know of a good MASK website to check out? I know I’ll regret it, but I really want a good DVD presentation of those eps. Maybe the gang over at Shout Factory has something in the works. Those dudes know how to make good DVDs.

I’m kind of surprised it took me this long to get around to MASK, the transforming vehicle toy line that also included tiny figures with helmets that had different powers. There’s a mountain of play value in the concept (kinda sounds like they combined two different ideas, doesn’t it?) which translated into me becoming a big fan of the 80s cartoon along with the toys. I’ve got two duffle bags filled with the vehicles somewhere in the depths of my parents’ house.

How rad is this commercial? If I had to guess, I’d say it was created before the cartoon because a) it’s got live action performances in it which are awesome and b) they seem to be focusing on the semi truck instead of Matt Tracker’s ass kicking flying car. I love how the commercial includes live action MASKers, stop motion vehicles movement AND kids actually playing with the toys. I wonder if those MASKs still exist?